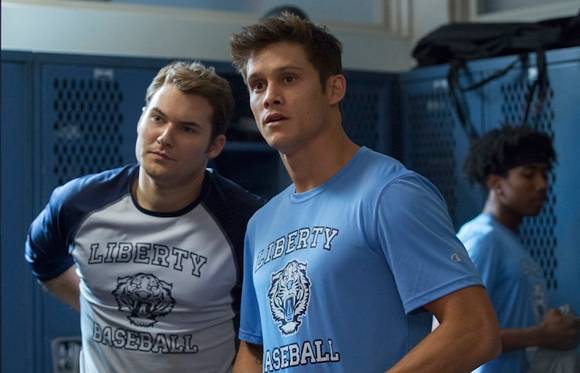 Season two of 13 Reasons Why may be just as controversial as the first.

The hit Netflix show returned on Friday, and over the weekend fans eventually got to that scene — in which Tyler (Devin Druid) is sexually assaulted with a broomstick by Monty (Timothy Granaderos).

Related: Trump Supporters Are Lose Their Shit Over News Of Obama Netflix Deal

Many viewers thought the scene went too far, calling out the show as problematic for the sake of controversy. But showrunner Brian Yorkey says the motivation for such a horrifying attack was itself even worse.

Unfortunately, it happens all the time to high school students. He told Entertainment Weekly:

“We delved into research and found story after story of cases like this — upsettingly similar stories of male high school athletes violating weaker kids with mob handles or pool cues. The number of stories we found about it were astounding and those are just the ones that got reported, and we know that sexual assault is hugely underreported.

We are a show that is interested in continuing the conversation around sexual assault in high school and this was a story that was not largely told and that made sense for these characters, so we took a deep breath and we all talked it over and decided it was worth telling even though we knew it would be hard to do and hard to watch.”

Do YOU think the show was right to show such a horrible event because it’s something real kids have to deal with? Or was it all done in bad taste?