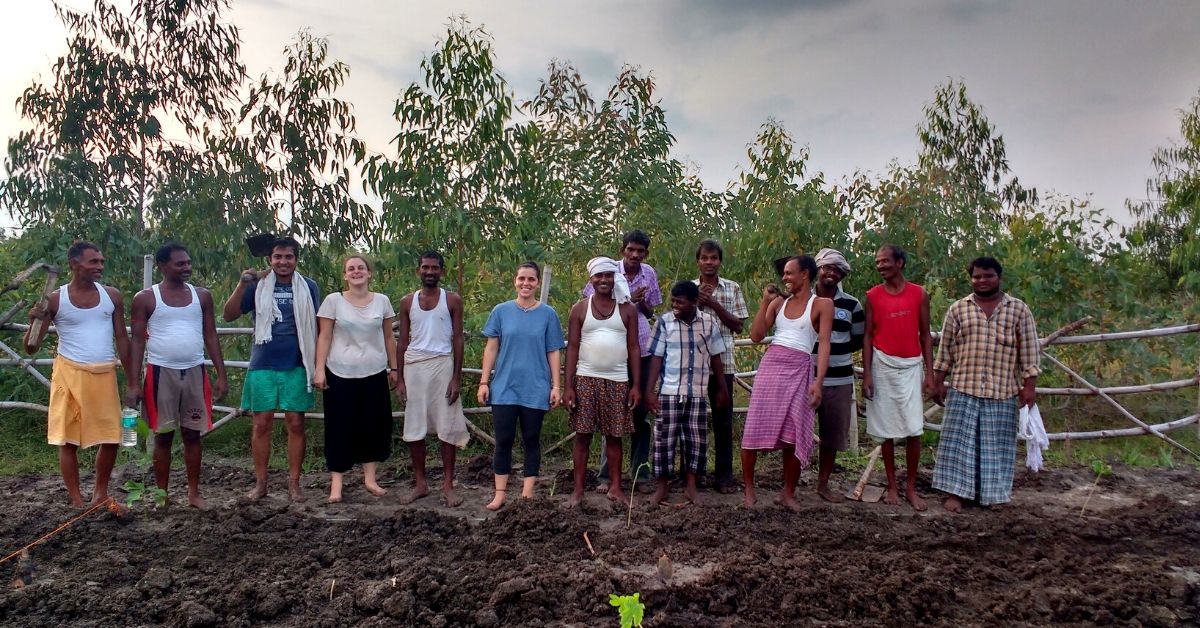 If the lockdown has taught us anything, it is the realisation that we take food for granted. Not all of us are urban farmers or have kitchen gardens and instead are solely dependent on the market supply.

And even though more than half the population of India is dependent on agriculture as a primary source of income, the sector is beset with problems. Water crisis, use of chemical fertilisers, inefficient cropping patterns, and dependence on unorganised credit sources being a few.

Crops, fruit trees, shrubs, and a variety of other plants are grown together in the agroforestry model.

Kumar Neeraj from Durdih village in Bihar is a person who acknowledged these problems and realised the importance of improving the lives of farmers. He accomplished it by introducing a farming technique that is profitable in the long-run, climate-resilient, and does not harm the environment.

“I started noticing that the farming community from my village was not deriving profits from agriculture. Most of them practice monoculture, and it is not sustainable for the environment. It makes the crop prone to pest attacks, reduces soil fertility, reduces the biodiversity of insects and birds,” says Neeraj.

Thus, in January 2017, he started Khetee, a non-governmental organisation based out of Durdih that promotes community development through ecological agroforestry and educational projects.

His motivation for starting this organisation further stemmed from the fact that people from his village were abandoning farming in pursuit of other opportunities in the urban areas.

And Neeraj wanted to stop this migratory practice and show farmers that farming can be a financially viable option if done right. He saw potential in agroforestry, an agricultural practice where food crops, trees, palms, shrubs are grown together on the same piece of land. “Through agroforestry, even farmers who don’t own large farmlands can generate big profits in the long run. This is because this farming technique improves soil fertility, thus improving agricultural productivity with reduced operational costs over time,” informs the 27-year-old.

To that end, Khetee conducts free training programmes for farmers, where they can learn the principles and practices of agroforestry.

After a hard day’s work

Besides this, as part of its educational projects, Khetee also works with the rural communities by helping set up community libraries, and disseminating information on farming, especially to kids. Additionally, they engage the communities through workshops and meetings.

Through its activities, Khetee has reached over 2,000 farmers from Durdih and the neighbouring villages till now!

A Lawyer by Training, a Farmer at Heart

Neeraj speaks to a few women in the village about agroforestry.

After his school education, Neeraj decided to pursue law and joined the Karnataka State Law school in Hubli in 2010. During all these years of training, there was one constant in Neeraj’s life, which kept him connected to his roots.

“Whenever we would get a few days off from college, it was not practical to travel all the way home and come back. So, I would often visit farmers’ fields in the villages nearby. I saw that although there were challenges in terms of irrigation facilities, technically they were well adjusted to deal with the challenges. This was not the case back home where despite fertile lands, there weren’t any kind of technical advancements,” he says.

Neeraj understood from these experiences that although he was training to be a lawyer, his heart lay elsewhere. Listening to his heart, he applied for a fellowship at the Kanthari Institute of Social Change in Trivandrum and joined the institute in 2016 after finishing his law degree.

“The institute was a great place to learn as they connected me to professionals and skilled farming practitioners who helped me understand sustainable farming techniques. This was also the time I was first introduced to the concept of agroforestry in detail,” he recalls.

Neeraj informs us that in this technique, big trees act as a windbreak to protect the crops on the farm. The model also helps in water conservation and benefits soil fertility. Besides, fruit trees and trees planted for timber are profitable for farmers in the long run.

The lawyer-turned-farmer continued his farm visits and looked at how farmers were practising organic farming in places like Mandvi, Raichur, villages near Trivandrum, etc. He also understood how monoculture is detrimental to the environment.

Later, when Neeraj worked in the fields as part of the coursework, he realised that there was no better time to start working towards farm focussed community development in villages. His time spent working in the fields led to the formation of Khetee in January 2017.

Neeraj knew that there was an ardent need to show farmers how successful agroforestry could be through practice. However, when they first started, farmers were hesitant to switch to this technique immediately, and a rain hose pipe, which was needed to practice this technique, was not readily available.

So, to carry out the model, he spoke to farmers in the village about agroforestry and its benefits. A few farmers then agreed to provide him with some land where Neeraj and other Khetee members could practice agroforestry.

About ten farmers have provided three acres of land in four patches where Khetee is practising agroforestry now, and in return send the product to the owners of the property.

These lands also become the place where other interested farmers learn and receive free training of the technique. Moreover, Khetee pays these farmers a stipend of Rs. 5000 every month. Every batch comprises around ten farmers, primarily landless farmers, and the training lasts for about a year.

“On that 3 acres of land, we have grown crops like rice, wheat, and a host of vegetables. Along with these, we have grown timber trees like mahogany, teak, shishum and fruit trees like mango, litchi, guava, amla, pomegranates, guavas. These trees bring profits to the farmers in five to 15 years,” he says.

The practice of agroforestry is entirely organic, where there is no use of chemical fertilisers. Instead, Neeraj has taught the farmers to prepare ‘jeevamrutha’, an organic fertiliser made from cow dung, cow urine, jaggery, mustard, soil, and gram flour. They procure the rain hose pipe from Tamil Nadu where it is readily available.

Additionally, Khetee engages in community development projects that go beyond agriculture. They worked with the local government and helped create a library with over 2,000 books last year in October. They also engage young students in nature education campaigns and workshops aimed at improving environment literacy among children.

Khetee is also collaborating with organisations from across the world which promote agroforestry. One such example is the Ecosystem Restoration Camp based out of the Netherlands.

Tomatoes growing on the field

“They are dedicated to restoring ecosystems and have even come and worked here with us. They have closely worked with us and have also helped in improving our agroforestry practice,” informs Neeraj.

Also, Khetee runs volunteer programs for anyone who would want to watch, learn and work closely with the farmers. These people could be academicians, researchers or anyone who wants to understand the agroforestry technique. Until now, the organisation has worked with over 100 volunteers in these years of operation.

The organisation also sends farmers for training programmes and workshops in other states. Take Raju Mandal for example who went all the way to Tamil Nadu for a 10-day seminar last year.

A farmer works on a patch of land.

The 44-year-old was one of the first farmers trained by Khetee. He has been working with them since the inception of the organisation.

“Before I started working with Khetee, I did not own any land. I would do odd jobs like work in other farmers’ fields or work as a mason doing construction work. But, having worked with Khetee, I learned a lot about how one can grow many crops on the same land. I also learned about organic fertilisers and how to make them,” says Raju who now leads the farmers in the training programme.

He now hopes to own a piece of land where he can practise agroforestry all by himself.

Challenges on the Way and Overcoming them

A farmer readies a piece of land for sowing.

Introducing a new agricultural technique to farmers who have been practising conventional farming practices can be challenging.

“There is an initial resistance on the farmers’ end when it comes to acknowledging new techniques. Moreover, since a lot of farmers in the village do not completely depend on agriculture as their primary source of income, it is difficult to engage them in agroforestry that requires one’s full attention,” shares Neeraj.

He also adds that since the returns are not that much in the beginning, farmers who don’t have land cannot quickly adopt this technique. Which is why they are reaching out to these farmers and teaching them while they get to practise it on the ground Khetee is already working on.

Children working with grow bags in the village.

After three years of operations, Neeraj feels that this is just the beginning, and there is still lots to do.

“I have realised that in this region, there aren’t many Farmer Producer Organisations (FPO). Hence, we want to set up FPOs in the future along with establishing good market linkages for the farmers,” he shares. He adds that working closely with the governments and ensuring that farmers avail benefits of government schemes is another thing on which they want to focus.

In addition to that, working closely with agricultural students and conducting workshops for city folk who can pay for the training would help them earn revenue that is going to ensure they carry on with training and educating more farmers.

Another thing Neeraj mentions is that they want to set up processing units for value addition. For example, processing cassava to convert it into products like sabu dana.

“I am not promoting a crop, but a system where we can tackle climate change, generate employment and income for farmers. In the long run, we hope that we can scale our agroforestry model in every district of Bihar and bring more areas under this technique. I want farmers to understand that through agroforestry, one can set up a successful agricultural practice which is also good for the environment,” he says, signing off.