3 reasons the B-52 bomber will outlive all of us 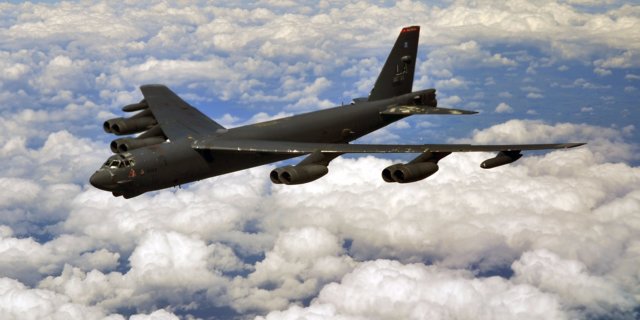 Of course you don’t.

Over time, military aircraft have become so complicated and defense industry has become so impervious to outside forces that you probably weren’t born when the United States could actually build tough, reliable and relatively low cost airplanes.

Look no further than the B-52, also known as the “BUFF” for “Big, Ugly, Fat F*cker.” Boeing built more than 700 of the bombers between 1952 and 1962 and the Air Force expects to keep flying the BUFF until the 2050s. That means that a bomber first built during the Truman administration will still be putting warheads on foreheads about the time the wars in Iraq and Afghanistan reach their halfway mark.

In comparison, the B-1 Lancer and B-2 Spirit, which first flew in the 1980s, are both expected to be retired in the early 2030s — more than a decade earlier than planned, according to Air Force Magazine.NASA’s Space Shuttle retired in 2011 after 30 years of service. The SR-71 Blackbird bowed out in 1990 after flying for 24 years.

Back in the day, America built things to last As the longest serving combat aircraft in the US military, the BUFF proves that when it comes to bells and whistles, less is more.

“I’m not an engineer, but I’d have to tell you that the folks that built this airplane designed an aircraft that is pretty sturdy,” said Air Force Maj. Gen. Thomas A. Bussiere.

Bussiere leads 8th Air Force, which is responsible for the service’s bomber fleet. He was born in 1963 — the year after the last B-52 was delivered to the Air Force.

Originally intended to be America’s nuclear bomber, the B-52 gained a new mission with the advent of GPS-guided weapons: Close air support. The BUFF has come to the aid of troops in contact in Afghanistan and Iraq with a payload of 70,000 pounds of bombs and missiles.

Although the B-52 has been updated over the years, the bomber’s core technology dates back to the 1950s and 1960s, making it totally unlike the Air Force’s newest aircraft, Bussiere told Task & Purpose on April 20.

“Essentially, we’re working today with 1960s versions of aircraft that have been modified — like other weapons systems in any service,” Bussiere said. “The fact that it has served so long and will continue to serve so long is a pretty remarkable statistic.”

One key to the B-52’s longevity is that bombers pull fewer G-forces than fighters, which are designed to “yank and bank,” he said. Also, many bombers spent years on alert with Strategic Air Command, the forerunner to US Strategic Command, so they were not flying many missions. Despite its age, the B-52 is expected to continue to shoulder the nuclear mission along with Air Force’s newest bomber, the B-21 Raider. The Air Force ultimately plans to buy 100 B-21s, which are expected to begin flying in the mid-2020s.

One reason why the B-52 will outlast the newer B-2 is that the US government made a “disastrous decision” to only buy 20 bombers instead of the 132 B-2s it initially intended to purchase, said retired Air Force Lt. Gen. David Deptula, dean of the Mitchell Institute for Aerospace Studies.

With advancements in fighters and air defense systems, the B-52 can fire “standoff” conventional and nuclear weapons from a distance without putting itself at risk, Bussiere said. The B-1 showed how this can be done during the April 13 strike against Syria by launching cruise missiles at targets while outside Syrian airspace.

Opening a can of whoop-ass on the Taliban and ISIS The B-52 has also proven invaluable to commanders in Iraq, Syria and Afghanistan because it can carry a lot of fuel and a lot of weapons, so it can loiter for a long time and provide the firepower to get US troops and their allies out of danger, he said.

During its 2017 rotation to the Central Command theater of operations, the 23rd Bomb Squadron flew 400 consecutive sorties against ISIS and Taliban targets before a maintenance issue cancelled a mission, breaking the B-52’s previous record for consecutive missions set during Operation Linebacker II in 1972, according to US Air Forces Central Command. Not to be outdone, the 69th Expeditionary Bomb Squadron flew a total of 834 B-52 missions after arriving in theater in September 2017.

The record-setting rotations are a testament to the “robustness and ruggedness” of the B-52, the work Air Force Materiel Command has done over the decades to maintain the bomber, and the dedication of airmen to keep the B-52 flying, Bussiere said.

“If you ever have a doubt about the motivation or discipline of an airman, I’d offer you to go out on the flight line and look in the eyes of a maintainer launching a B-52,” Bussiere said. “The B-52 warriors that rotated in and out of the Middle East absolutely crushed their mission.”