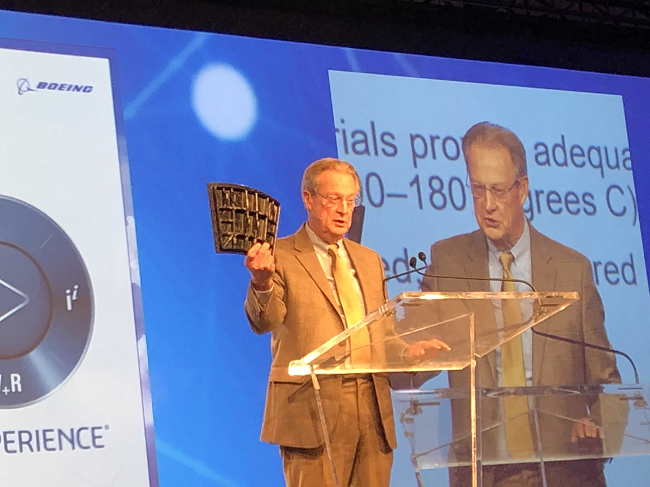 Recently, Dassault Systèmes, the 3DEXPERIENCE software company, held its 3DEXPERIENCE Modeling & Simulation Conference. I was lucky enough to be invited to attend the event in Novi, Michigan, and the first plenary session featured a keynote by Clifton Davies, Principal Aeronautical Engineer for Lockheed Martin Skunk Works, and an executive roundtable. But that was only the first half! The Finn Mast project began in 2017 as a two-part quest to win the gold in Tokyo at the 2020 Olympic Games, and test and improve the 3DEXPERIENCE platform at the same time. Finn dinghy is not a term I’d heard before – it’s a class of single-handed sailing, and while many of the parts are strictly regulated, the boat’s sail and mast are fully open for innovation and optimization.

http://go.3ds.com/oWuEmbark with us on the “Finn Mast Project” and discover how Dassault Systèmes helps @Jonathan Lobert, an accomplished Olympian Finn sailor, @Laurent Tournier from @Heol, a composites manufacturing company and, @Paul Iachkine from @WB Sails, a sail builder, to look for the gold medal at the 2020 Tokyo Olympic Games! Stay tuned to the CATIA User Community, and you will discover every two weeks another episode of the “Finn Mast Project”, explaining how we use the 3DEXPERIENCE platform to improve the Finn mast!#3DEXPERIENCE #CATIA #Design #Engineering #Tokyo2020 #OlympicGames

Heol Composites founder and light sailing R&D engineer Laurent Tournier and Pierre-Yves Mechin, a structural engineer and the Composites R&D Development Manager for Dassault, walked onstage at the conference to share the success story of how Dassault’s composites solutions and the 3DEXPERIENCE platform were used to make a better mast that would help optimize the boat’s dynamics and increase its speed. Tournier detailed the typical mast manufacturing process, and mentioned that originally all masts were made of wood, before moving to aluminum in the 1970s and carbon fiber in the 1990s. He explained that a Finn mast is only about 15 feet long and 120 kg, and holds a single, very large sail.

“This particular heavyweight dinghy leans to average weight of sailor – 100 kilo,” he said. “It’s a very demanding, heavyweight boat, and it introduces, of course, a lot of flaws into the rigging.” In terms of competition, there are plenty of additional issues to deal with, such as class rules that require teams to comply with some geometry. Tournier said that with consideration to the center of gravity, and the fact that the Finn mast is self-supported, the weight of the boat is very important. The mast should be stiff on one side, but soft enough for “efficient aerodynamics” so it can bend and fit back to its original shape at the proper moment.

“How could we use the 3DEXPERIENCE platform to cover all the objectives?” They used Dassault’s knowledge-based MODSIM to take a closer look at the design of the Finn mast, and create the specific shape and material, before moving on to simulating the structure. Mechin and Tournier explained that in order to precisely measure sensitivity on the stiffness of the mast, they need to optimize the manufacturing parameters. Using the 3DEXPERIENCE platform allowed them to transfer the design properties right to the simulation for testing. They used Process Composer to run parametric optimizations of the mast design, which was a big help when it came to changing individual plies. All in all, four Finn masts were built, and each design improved on the previous one. Simulation tests were performed for masts three and four, which are still not quite perfect, so Mechin and Tournier hope that the fifth time will be the charm. They discussed next steps, such as if it will be possible to translate the work they’re doing on the Finn mast to a different, larger mast using the existing parametric model they created. Mechin and Tournier then left the stage, and the session’s special guest speaker was announced: Dr. Byron Pipes from Purdue University, who was there to speak about the topic “Simulation as the Language of Innovation.”

Dr. Pipes, the Executive Director of Purdue’s Composites Manufacturing & Simulation Center (CMSC) has a long history of working in the aerospace sector, and with advanced composite materials. He told the audience he would be sharing some applications where academia has taken model-based engineering, the Factory of the Future, and virtual and digital twins to the next level. “Much has changed,” he told us. “The process of building the digital twin and model-based engineering for the future of this kind of work is well underway.

“The Factory of the Future is on all of our minds, from automotive to aerospace industries. What will it look like, and what will it need? Intelligent manufacturing is going to be highly automated, and we’re going to need digital tools for this. We will be able to design for performance.” He then showed us two images of the same part, and how the same characteristics on each are shown on the image of the observation, as well as the image of the prediction…thanks to the stimulation tools of the 3DEXPERIENCE platform.

“I think you’ll find that the simulation tools we have today have broad applications,” Dr. Pipes stated.

He explained that the performance of composite materials – more than any other type – depends on how they were made, and said that when it comes to digital twins for manufacturing, 3D printing is “still very much in its infancy.” “But validation is at the root of the success of simulation,” he continued.

“Simulation, validation and characterization are the roots. We need all these pieces.” Dr. Pipes said that simulation connects all the design considerations and stakeholders in a single place. He mentioned that Purdue University has “an ambitious undertaking” in that researchers there believe all manufacturing processes – subtractive and additive – need to join the digital twin status. Then, he brought up an example – Volkswagen had recently asked the CMSC to design a molded lift gate for a future product. The researchers were provided with the geometry of the metal legacy part, and asked if they could manufacture it and predict its performance. Dr. Pipes pulled up a slide showing the process the researchers took to deliver what Volkswagen had asked for. He mentioned two integrated workflow apps used for the project that dealt with compression molding and 3D printing, and said that overall, motivation in additive manufacturing comes from work producing tooling for products that’s happening all around the world now. What’s important now is to focus on 3D printing the specific part, while also working to predict how it will perform once the manufacturing process is completed.

“You want to start in CATIA with a mold in geometry, and end with a performance of the mold during the manufacturing process, where the mold is heated and the part is heated and that creates the digital twin,” Dr. Pipes explained. You can see the Additive3D simulation process workflow in the above slide: first the CAD geometry with CATIA, as Dr. Pipes mentioned, and then on to slicing with Simplify3D. The CSMC team working on the Volkswagen part is using a 3D printer they created at Purdue, and then turning to CATIA again for finishing the final part. Then, SIMULIA is used to predict the part’s performance.

“Where are we going with this, and where should we go?” Dr. Pipes asked the audience, noting that it’s complicated for the user to integrate all of these different steps.

“We’d like something where we can just choose a material, geometry, machine, and hit go, and then the other side the answer pops up, and we’re there now.” In this scenario, the 3D printer would be chosen first, and then the material and load geometry of the part in CATIA. Pick your slicing options, hit the ‘go’ button, and then the results would pop up, no muss, no fuss. He explained that the various inputs for this kind of system would be a machine card, AM system card, and digital material card, before combining them into an FEA process simulation in order to predict features like crystallization, shape change, shrinkage, and stresses, and potentially even in-service or creep deformation. In another example, Dr. Pipes said that Boeing asked the researchers at CMSC what they could do for its thrust reverser blocker door. The legacy metal tool was replaced with a composite material, then redesigned, and compression molding with the digital manufacturing twin was simulated. Dr. Pipes summed everything up by stating that 3DEXPERIENCE can offer users a platform for the model-based engineering of composite structural applications by creating a digital manufacturing twin. Check out the slide below to view the rest of his summation points. “The new lightweight products that are coming are going to find this capability at the heart of its success. Without it, we’ve seen many years of trial and error, and there are simply too many variables to capture the optimum solution that way,” Dr. Pipes said.

“Additive manufacturing must be simulated so we can predict performance, but also for prototype tooling. The opportunity to develop a very rapid prototype of any product can accelerate its development. We think additive manufacturing will be revolutionary – you can design, manufacture, and test product prototypes without paying for production tooling.” Numbers don’t lie – Dr. Pipes said that the original tooling for the Volkswagen lift gate costs $7,000, and that 3D printing is far less expensive. Additionally, he held up the door that CSMC redesigned for Boeing, and said that the materials used to fabricate it are currently being used to make other parts that are driving and flying today.

Discuss this story and other 3D printing topics at 3DPrintBoard.com or share your thoughts in the Facebook comments below.