Adam Jones Does Something Interesting 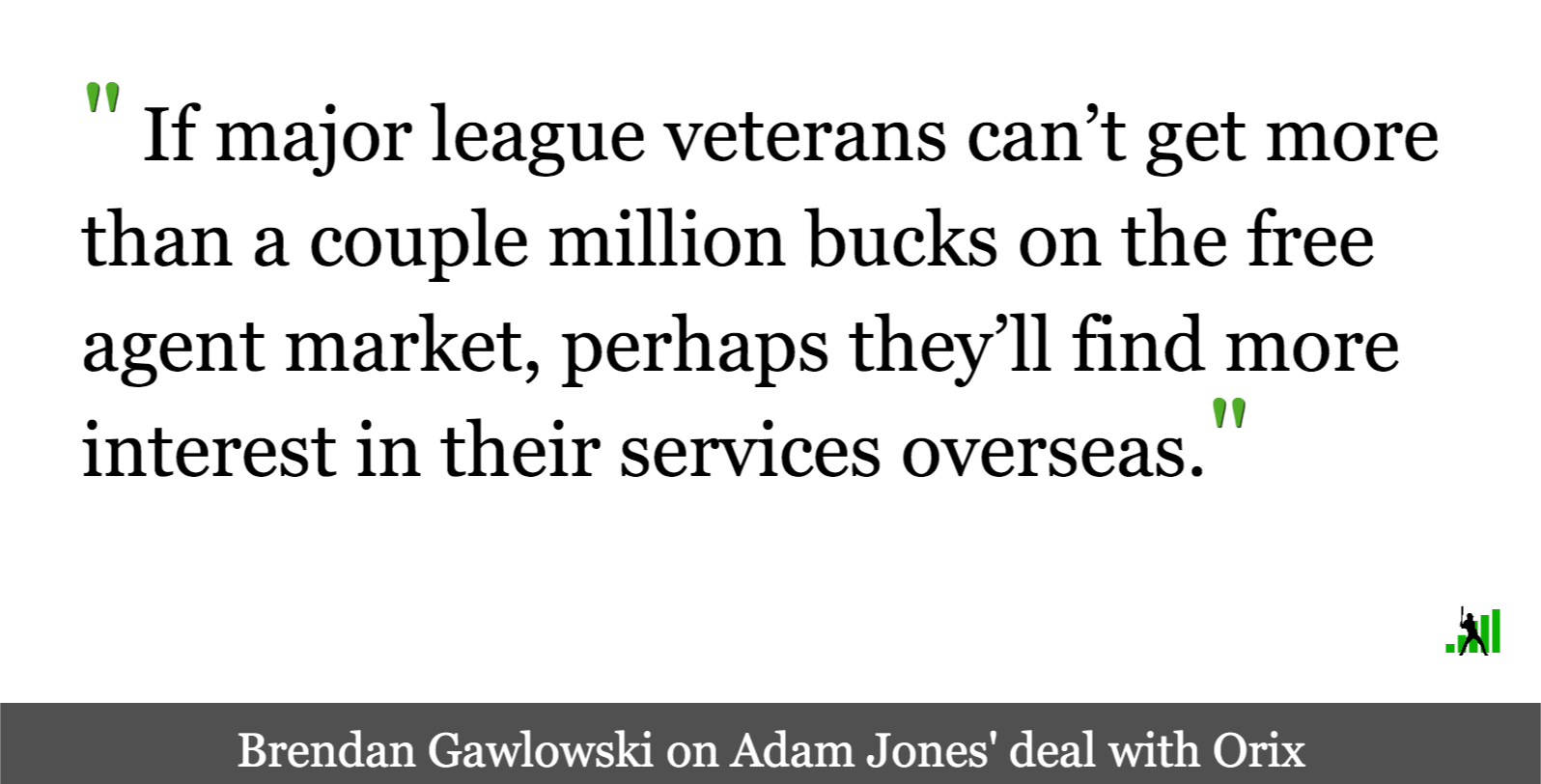 The return of a vibrant free agent market has been the story of the offseason thus far. In recent days, we’ve seen three $200-plus million deals, including two record-setting contracts for pitchers and a $245 million contract for Anthony Rendon. Alongside, we’ve observed the continuation of a pattern established early this winter, where most players on our Top 50 Free Agent List have beaten their projected salaries. That hasn’t been true in every case: Josh Lindbloom just signed for more years and a lower AAV than we expected. But he’s one of the few exceptions. From Gerrit Cole to Tanner Roark, most players have signed for more money than we anticipated. Even Blake Treinen, who the Athletics didn’t even tender a contract to, inked an eight-figure deal on the open market.

That doesn’t mean everything has been patched up between ownership and the players. Teams seem every bit as leery of exceeding the luxury tax as they did last year, a stance best evinced by the Angels’ decision to package first-round pick Will Wilson with Zack Cozart in what amounted to a salary dump. More troublingly for the journeymen of the game, teams non-tendered more arb-eligible players than usual, including productive veterans like Treinen, Kevin Pillar, and Jonathan Villar. Consequently, the market for second-division starters and part-time players is unusually tight and crowded. Even with a resurgent free agent market, it’s a precarious time to be a low-level player in search of a home.

This brings us to Adam Jones, an All-Star turned platoon outfielder in the November of his career. In an era in which rookies are debuting near the peak of their powers, Jones’s career arc looks like the parabola we used to expect as the norm. After peaking as a 4-5 WAR player in his late 20s, he’s steadily declined in recent years:

Prior to the 2019 season, Jones had trouble finding work. He wasn’t great during his final year in Baltimore; that he accrued 0.4 WAR as a starting center fielder with an about league average bat says all you need to know about how his play in the outfield had dipped.

But he was also a player who, in previous winters, could have found a job somewhat quickly. After all, he was still a roughly league average hitter. He had power. His defensive numbers would tick up in a corner. And he had every soft factor imaginable going for him: From his reputation as a leader — Christian Walker’s quote “I want the opportunity to treat a younger player the way I’ve been treated from Adam Jones” indicates the level of respect he’s earned throughout the league — to his thoughtful reflections on important issues outside the game, Jones is the kind of player teams love to bring into their clubhouse.

Ultimately, he got a major league deal. But it was for just $3 million (with incentives), and it came very, very late; Arizona didn’t sign him until March 11. The overall experience was a frustrating one for him personally, even as it was emblematic of a wider trend that ensnared many players of similar caliber.

Lost among the massive moves that transpired this week, Jones signed a two-year deal Monday night, worth $8 million in guaranteed money and up to $10 million with incentives. There’s also a club option for a third year that could take the deal up to more than $15 million in total value. If that all seems too good to be true, it kind of is, as Jones didn’t sign with an MLB team but rather with the Orix Blue Wave in Japan.

At a glance, there’s nothing unusual afoot. Dozens of Americans play in Japan and South Korea every year, and plenty of them have major league experience. Most of these players are Triple-A vets in their late 20s or early 30s, but not all; Manny Ramirez famously spent a few months playing in the Taiwaneese League back in 2003.

But both the timing and the tone of Jones’s signing is notable. Even in a comparatively good market for free agents, Jones didn’t wait around for a big league offer. Perhaps he saw the writing on the wall. He wasn’t very good last year, and even with an additional 30 roster spots to compete for (all teams will carry 26 players on their roster in 2020), he may have felt that any big league offer would have left him in a tenuous position.

Interestingly though, it seems like a substantial part of his motivation to sign offshore was to escape from the difficult environment many big league veterans find themselves in. His Instagram post announcing the decision suggests as much: “There is a team over in Japan… that views me as a valuable piece… and I’m up for the challenge! They have expressed to my family and I that they value everything I bring to the game, and have proven that by offering me a 2 year guaranteed deal with a chance to play a 3rd year and beyond.”

Jones publicly criticized the league as a whole for last year’s slow winter, particularly in how it affected veterans. He reflected on his own slow recruitment, and called teams out for not spending on potentially impact players (“You mean to tell me Dallas Keuchel can’t help you? You mean to tell me Craig Kimbrel can’t help you?” he asked rhetorically in one radio interview). He also finished off his post with a reference to the upcoming collective negotiation, writing “You all be good and play nice over there especially with the CBA coming to an end. There is enough to go around, just work it out!” The wry tone seems to confirm that the league’s broader economic conditions shaped his decision to play in Japan.

It’s unusual to see a veteran with Jones’ history of success, financial resources, and at least a chance at another big league deal walk away from MLB. There are a couple of possibilities at play.

On the one hand, this could be what it initially appears: An aging player with fungible skills realizes he can’t obtain the deal he thinks he should get and decides to pursue a better offer in Japan. We see some version of this every winter, if not typically from a five-time All-Star.

But this may also signal the start of a trend. If major league veterans can’t get more than a couple million bucks on the free agent market, perhaps they’ll find more interest in their services overseas. Salaries for the top players in the NPB are considerably lower than they are in the major leagues, but it’s not unheard of for Americans to clear $4-5 million in a season. And that’s the going rate for the guys who usually head to Japan, the Dennis Sarfates and Stefen Romeros of the world, replacement level players who opt to move east rather than endure Triple-A limbo. A big leaguer, even one on the lower half of the circuit’s talent pool, should be able to command even more. For player frustrated with the free agent market and willing to travel, Japan and Korea present an opportunity.

Or at least it does for Jones. It’s important to feel valued at work, and it’s easy to see how ballplayers in 2019 might increasingly feel like fungible assets. The 34-year-old appears seems excited to have signed with a club that appreciated his skills and presence — imagine that! — even if it takes him away from everything familiar and comfortable. That may or may not reflect an increasing willingness for guys to play elsewhere, but it’s certainly interesting to watch a star like Jones take a calculated look at the very large base of this year’s free agent pile on one side and the climate from recent winters on the other and decide ‘to hell with all of this.’