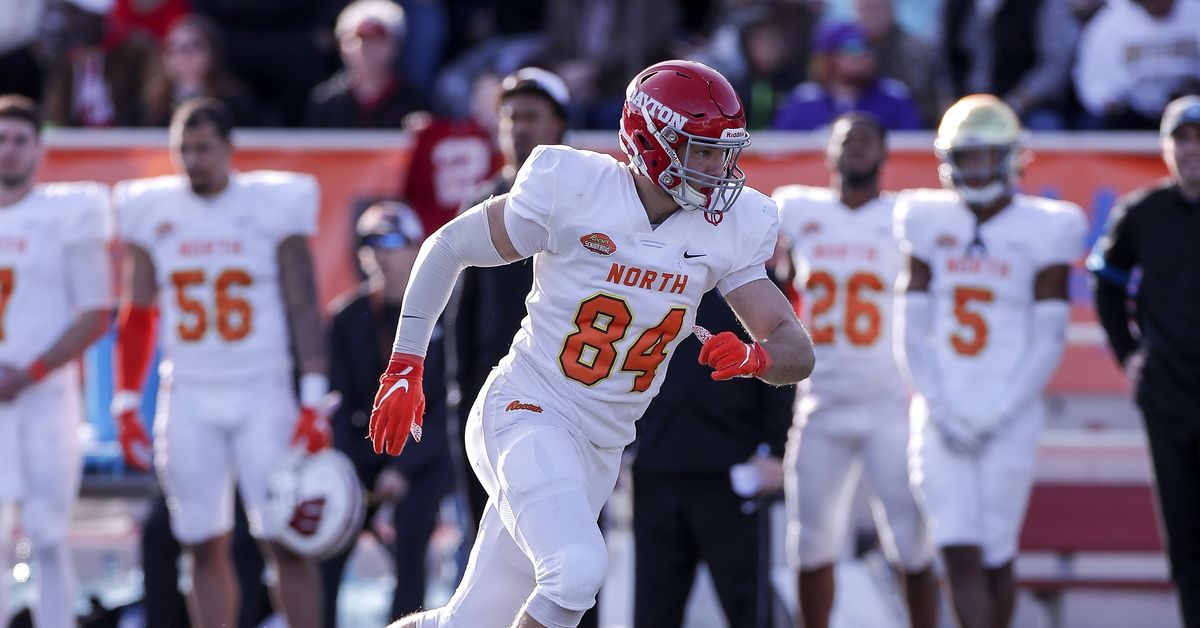 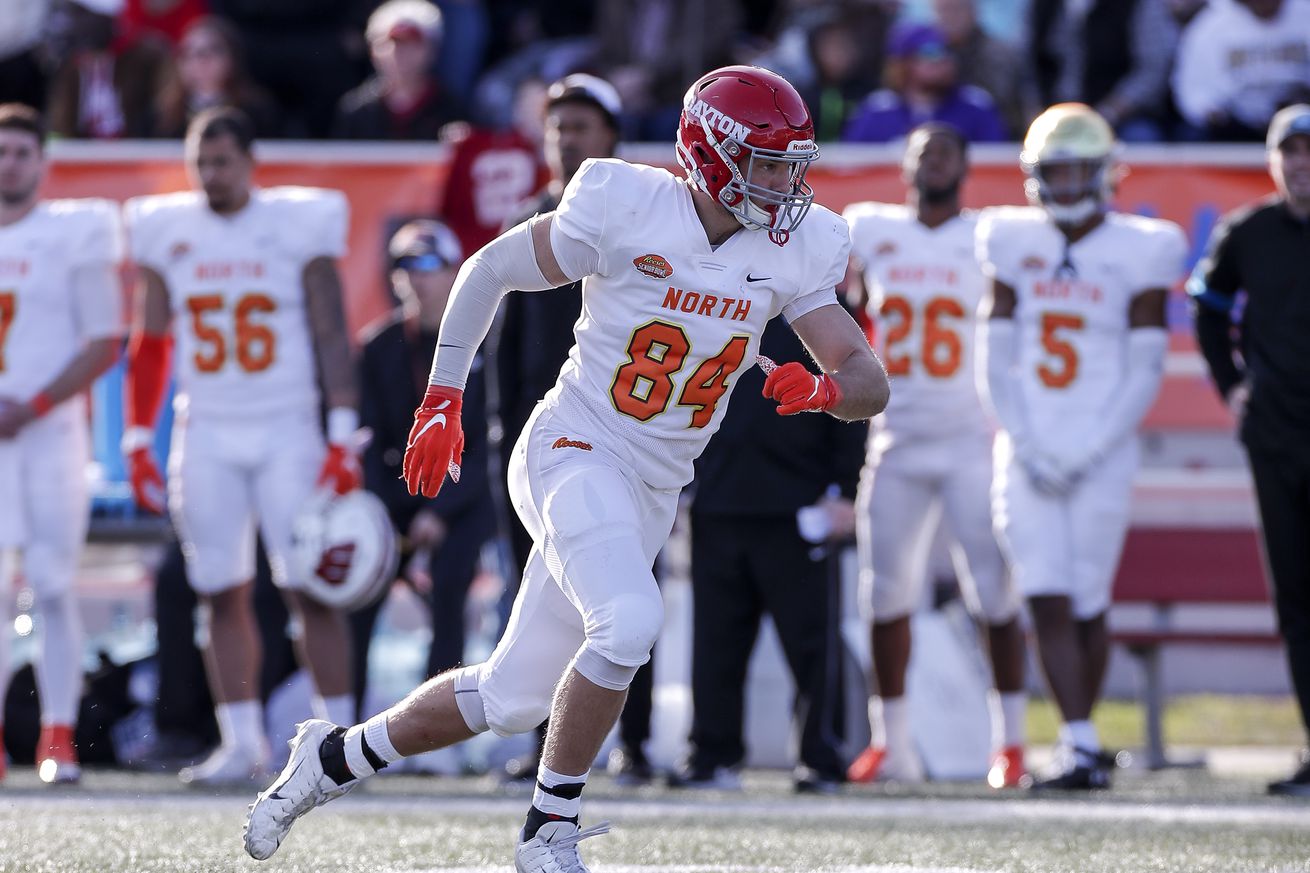 Meet the Flyers tight end who’s being compared to George Kittle in this year’s draft class.

Dayton tight end Adam Trautman just made history for his Flyers football program. The University of Dayton hasn’t produced an NFL Draft pick since 1977. But on Friday, Trautman changed that at the 2020 NFL Draft. The New Orleans Saints selected Trautman with the 105th pick in the third round, making him the highest-drafted player in Dayton school history.

Let’s get to know the guy who just might put Dayton football back on the NFL stage.

Checking in at 6’5’, 255 pounds, Trautman has great size for a tight end. At Dayton, he finished his career with 2,295 receiving yards and 31 touchdowns. His best season came in 2019, when he averaged 83 receiving yards per game. He led the Flyers in receiving yards during his sophomore, junior, and senior seasons.

“If an NFL team is searching for the next Kittle, Trautman is the closest thing in this draft,” Kadar says. “He may not be the blocker Kittle is, but few tight ends are. Regardless, in that area he’s good enough. Anymore, with a receiving tight end, the ability to block is a plus.”

Trautman said at the combine that he models his game after the 49ers’ tight end:

“I love watching him play, just from a relentless standpoint,” Trautman said in Indianapolis.

On film, Trautman uses his size to his advantage to create separation from defenders, and he has a good burst upfield. He’s got a lot of athleticism with his size, too — check out this gorgeous one-handed catch he had against Valparaiso last year:

Second straight week the Flyers got some love from the @espn College Football Final Show! Last week it was a helmet sticker for Jack Cook. This week it was Adam Trautman’s one-handed TD catch on a double-reverse pass in UD’s 41-28 win at Valparaiso. #GoFlyers #GotGrit pic.twitter.com/LhqLYoqG3m

Trautman, from Elk Rapids, Michigan, wasn’t a highly touted recruit in high school. Per his 247Sports profile, Dayton was his only scholarship offer.

Interestingly enough, Trautman wasn’t always a tight end. He arrived at Dayton as a quarterback, but he asked his offensive coordinator at the time if he could switch to tight end to get more reps on offense.

“I was just like, ‘Hey, I just want to be a part of this,’” Trautman said via Browns.com. “I knew I could bring a whole new dynamic to the tight end position. We eventually made the switch, and that was the greatest decision of my life.”

That decision has continued to pay off for Trautman. Here’s what Kadar said about Trautman’s draft stock:

He’s going to get drafted highly because of his ability as a pass catcher. Trautman played on the outside a lot at Dayton and showed off his physical skills to get open using his frame and breaking tackles after the catch. As a former basketball player, you can see how much of an easy mover Trautman is on the field. There’s not a lot of wasted motion in how he plays. That helps make up for his playing speed, which appears to be good but not great.

The Dayton product said in Indy that one of the biggest things he had to learn was blocking technique.

“From a work mentality, I’ve always had the finish, like getting after people,” Trautman said. “But the technique tied into it, obviously I was very underdeveloped in that. My redshirt junior year is when I could start to see it at first. I mean it wasn’t even close up to where I am now, but I could start to see it.

“And this year was when I found myself, a lot of times, driving guys eight, nine, 10 yards off the ball and putting them on their back. I said this at the Senior Bowl: I’d rather control the line of scrimmage and move people off the ball than score touchdowns and catch passes. And I think it shows up on film.”

That kind of attitude is likely to impress teams leading up to the draft. Kadar projects Trautman to go as high as the second round, but no lower than the third.

Dayton football players haven’t been drafted in decades, but Trautman changed that

The last Dayton player selected in the NFL Draft was offensive tackle Bill Westbeld, who was taken in the 11th round by the Seattle Seahawks in 1977. But Westbeld didn’t end up playing in the NFL. It’s been even longer since a former Flyer has actually appeared in an NFL game. OT Mike Wilson started a few games for the Chiefs in 1975, and OL Bob DeMarco played in 14 games for the Rams the same year.

Ahead of getting drafted, Trautman said he was using the odds against him as motivation.

“Every level I’ve played at I’ve been told I wasn’t good enough,” he said via the Dayton Daily News in Indianapolis. “Coming out of high school, you’re not good enough to play in the (NCAA Football Bowl Subdivision). And then coming out of Dayton, really no one has played in the NFL or been drafted since the ‘70s, so I’m here to keep fighting that, always use that edge and carry it with me.”

Trautman is now officially the first player in 43 years to represent the Flyers at the draft, and the highest selected for Dayton’s program. New Orleans has Jared Cook at tight end already, but adding Trautman will make for a great one-two punch at the position for Drew Brees and company.