After 4,300 Books Were Banned in Kuwait, an Artist Installs a Cemetery of Banned Books 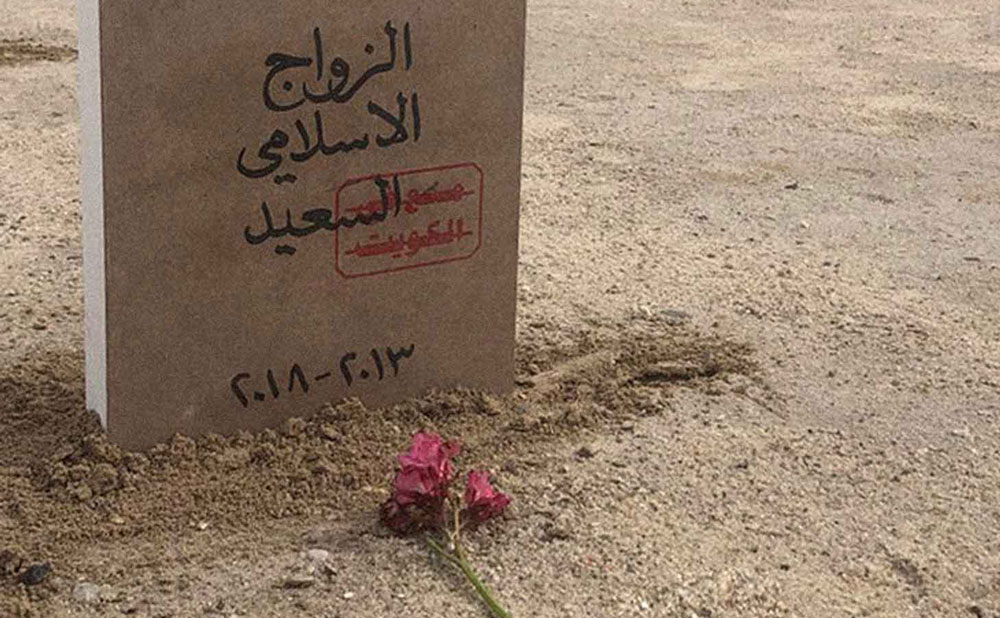 In August 2018, Kuwait’s government officially acknowledged its national ban of over 4,300 books since 2014. On Friday, November 22, Kuwaiti graphic designer and artist Mohammad Sharaf gave these titles an official funeral in protest of the government-mandated censorship. He installed the “Cemetery of Banned Books” on land fittingly beside Kuwait’s Annual Book Fair.

On over 200 headstones, Sharaf engraved the names of books including the Nahj al-Balagha, the Divine Comedy, Victor Hugo’s The Hunchback of Notre Dame, Gabriel García Márquez’s One Hundred Years of Solitude, and many more deemed unfit for public consumption. The national ban includes children’s books like Disney’s iteration of The Little Mermaid, encyclopedias, novels, and political or religious books. According to the New York Times, a committee of six Arabic readers and six English readers under the Ministry of Information are responsible for the official judgments. The Cemetery remained intact for four hours before it was removed by Kuwaiti authorities. Though he has not yet been approached by government officials, Sharaf tells Hyperallergic, “There is a chance that I might face legal repercussions because I did not take permission to use the land to put my installation.” He says the project was self-funded and in no way affiliated with the Annual Book Fair.

Sharaf calls the installation a “symbolic piece of protest and public art intervention.” The artist says that while most of the feedback on social media has been positive, he has received criticism for supporting books “that are sexual or secular and in favor of atheism.” “The motivation [for the Cemetary] is simply to protest and fight the arbitrary ban of books in Kuwait. As a person who is an activist in the field in art and design, I’ve always thought that activism can be done in many forms,” Sharaf says. “Typical activism like riots, panel discussions, and lectures are good, but they are limited in their reach.”

Sharaf says his motivations include, “to protest the ban on books in Kuwait … in a very creative, yet widely accepted way, that is conceivable by the general public.” He adds, “I wanted the message to reach the people who are not too involved in this issue.”

At the front of the cemetery sat a librarian’s desk and stamp, signaling the symbolic idea that the books have been “checked out” of Kuwait’s canon. The “Cemetery of Banned Books” The books have been “checked out” of Kuwait’s canon

The post After 4,300 Books Were Banned in Kuwait, an Artist Installs a Cemetery of Banned Books appeared first on Hyperallergic.