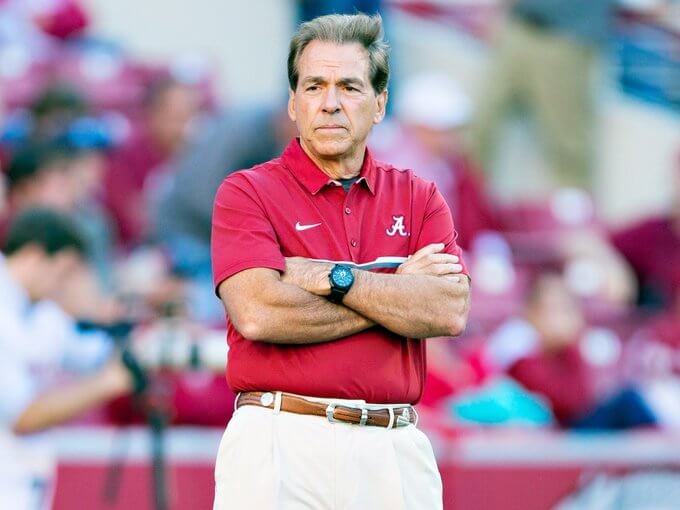 Alabama is a 7.5-point favorite over Michigan in the Citrus Bowl January 1
Crimson Tide backup QB Mac Jones has played well when starting in place of injured Tua Tagovailoa in 2019
Wolverines QB Shea Patterson has impressed down the stretch, throwing for 1,055 yards, 10 TDs, and only 2 INTs in the last three games

The Alabama Crimson Tide (10-2, 6-2 SEC, No. 13 CFP) are 7.5-point favorites over the Michigan Wolverines (9-3, 6-3 Big Ten, No. 14 CFP) in the Citrus Bowl January 1 with kickoff set for 1 pm EST on New Year’s Day. The Tide roll into the game in Orlando with backup quarterback Mac Jones playing well in place of injured starter Tua Tagovailoa in 2019, while Wolverines QB Shea Patterson has impressed down the stretch.

If you had told Maize and Blue fans before the season started their team would be facing Alabama in a bowl game, every single one of them would’ve been ecstatic. Of course, the Citrus Bowl isn’t a College Football Playoff game. It’s not even a New Year’s Six game. But this battle of college football’s true blue bloods (‘Bama has the most titles and Michigan has the most wins) is still incredibly intriguing. Let’s analyze this Big Ten-SEC matchup and the Alabama vs Michigan odds and make a prediction.

The last time Alabama played in the Citrus Bowl, it was known as the Capital One Bowl. And while ‘Bama lost three games in 2010 (including a loss to eventual BCS champion Auburn in the Iron Bowl), the Crimson Tide dominated Michigan State 49-7 in the bowl game.

The 2019 squad finds itself in a similar situation to its 2010 counterparts. This year’s version also lost to LSU and Auburn in defeats that kept the Tide from qualifying for a sixth-straight CFP berth. And as Crimson Tide safety Jared Mayden told 247Sports, strength and conditioning coach Scott Cochran is using that blowout victory over the Spartans as motivation for this year’s unit.

“He told us those guys took the right approach to get ready for the game. He told us if we want to go out and have a lasting memory of what our team could do and what this season could finish up and be like, the mindset that team has is the same mindset we need to bring toward facing Michigan.”

For those thinking ‘Bama will put on a lackluster performance because its not in a playoff game, think again. All that huge win over Michigan State did was catapult Alabama to back-to-back national titles in 2011 and 2012.

While he may not be Tua Tagovailoa, the prolific Alabama offense hasn’t missed a beat with Mac Jones under center. The redshirt sophomore has engineered point totals of 48, 66 and 45 in his three starts against Arkansas, Western Carolina and Auburn. ‘Bama is still putting up 48.3 points per game, which is second-best in the country.

With a win over a Michigan team that wants to prove it can actually win a big game, Jones would enter spring ball riding a wave of confidence in Tuscaloosa.

Shea Can Play Too

Jones’ opposite number in Orlando has been slinging it of late as well. Wolverines quarterback Shea Patterson has put up point totals of 44, 39 and 27 against Michigan State, Indiana and Ohio State. While those numbers may not be as impressive as Jones’, Patterson doesn’t have near the wide receiving corps that Alabama does.

And don’t forget, Tide linebacker Terrell Lewis and cornerback Trevon Diggs will sit out the bowl game to begin preparing for the draft. That’s two key pieces missing from a young Alabama defense that allowed 40-plus points in its two losses.

While I think Alabama wins, I’m playing the “Over” in this spot. Both teams have proven they can score points, while also allowing plenty.