And in the 6th window, Mikel Arteta bought a striker 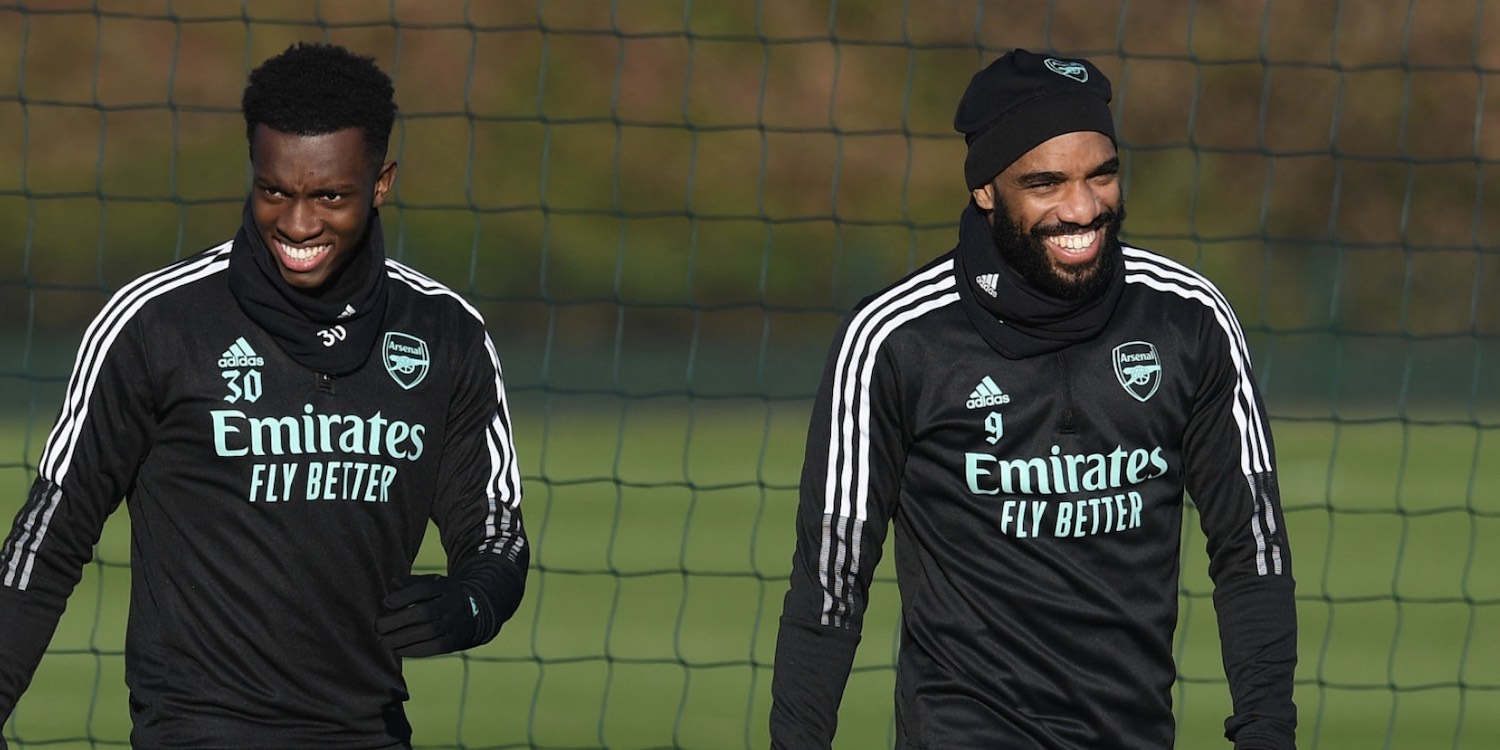 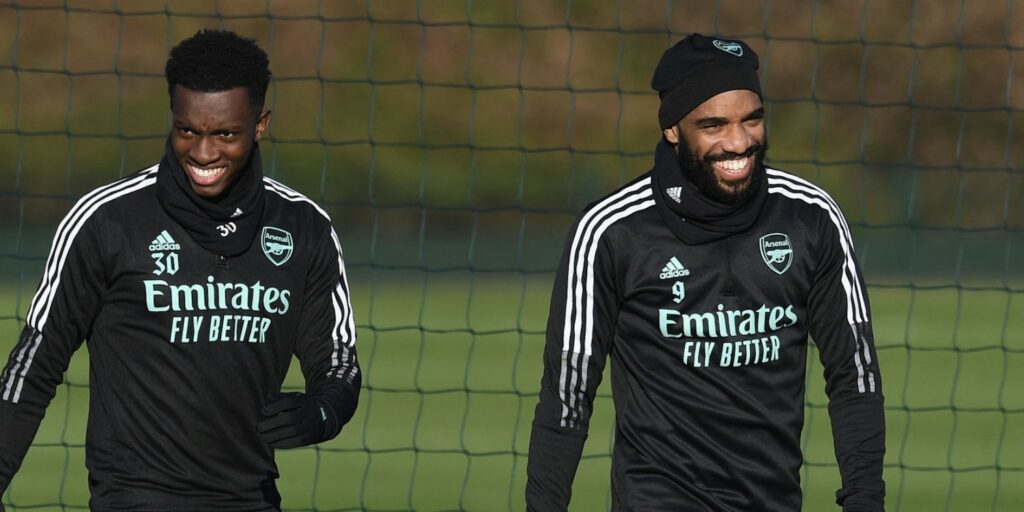 Since he arrived at the club, there have been five transfer windows for Mikel Arteta. January 2020, summer 2020, January 2021, summer 2021, and January 2022. It should be noted that for the first one he was head coach and not manager, with Raul Sanllehi Head of Football. During the second one Raul got … er .. departed the day after Willian signed … and Arteta was made manager.

We know Willian was a player Arteta wanted, but we also know that didn’t work out. The breakdown of those windows is interesting to look at now.

Summer 2020: Willian. Thomas Partey. Gabriel Magalhaes. Runar Alex Runarsson. Mari and Cedric’s loan deals are made permanent, something which was built into the initial deals.

So, we have 2 goalkeepers, 6 defenders, 2 central midfielders, 2 attacking midfielders, 0 strikers. Which, when you think about it, is kind of mad. I haven’t done the research on this, but I’d wager that almost every manager who arrives at a club makes some kind of striker purchase in the first window, or at the latest the second. Mikel Arteta has had five windows and not signed a single one. To be fair, he inherited a £100m+ strike force, with Eddie Nketiah as back-up – and he did recall Eddie from a loan at Leeds and decide to keep him, but I don’t think adding a striker you already have counts when you’re examining transfer windows.

It’s made even more interesting by the fact that come this summer, he’s going to have to break that habit and bring in at least two strikers during the transfer window. There’s a part of me that thinks Arsenal might consider an extension for Lacazette in order to avoid having to do that much business. They might view putting together an entirely new strike force as overly complicated, and look for some consistency in the squad, but it’s not something I’d be keen on. I hope the Frenchman does well in these next 17 games and contributes to what I can only hope is a solid second half of the season, but I absolutely want us to go in a different direction.

His former club, Lyon, are interested in bringing him back, with their president Jean-Michel Aulas on record this week:

“It’s Lacazette, he interests us because he marked this club. It’s a profile that interests us and we have always been in contact with him. We have to try to see if we can do it as a free player but we will not be alone.”

These next few months are very much shop window for a player who will be able to leave on a Bosman in June. If that provides him with some extra motivation during these final months that would be great, but I don’t think we can pretend it’s an ideal scenario either. I remember during his final season, when his contract was expiring, Sylvain Wiltord barely played because Arsene Wenger didn’t want to use a player whose deal was about to run out. Granted, that’s a much easier thing to do when you have Thierry Henry, Dennis Bergkamp, Jose Antonio Reyes, Kanu and Jeremie Aliadiere at your disposal, but still.

As for Eddie, a contract extension seems unlikely, not least because the player himself has rebuffed a couple of offers already. Perhaps he might view the departure of Pierre-Emerick Aubameyang as a chance to move up the pecking order and there’s no question that has changed the landscape somewhat in that regard. However, I don’t think he’s shown enough to suggest he’s ever going to be anything more than a back-up option for Arsenal, and if he wants to play regularly, this summer is absolutely the best chance for him to move with plenty of free transfer offers on the table, I’m sure.

In the space of 6 months it looks like Arsenal will lose Aubameyang, Lacazette and Nketiah for a grand total of £0 and, if the stories about the payoff to the former captain are correct, we’ll have paid around £7m to leave ourselves without a recognised centre-forward. The question then is what do we do? No doubt there are targets, but do we buy two players with similar profiles, so that the absence of one makes replacing him more seamless? If your number 1 guy is out, the number 2 guy just comes in and does the same thing, more or less.

There’s also something to be said for having variety, a plan-b, if you like, but it’s not always functional. For example, Aubameyang and Lacazette are different, but not sufficiently for you to be able to radically alter your game plan. As a duo they had periods when they worked together quite well, but never on any kind of consistent basis. So what exactly we do in the market come the summer will be very interesting. Until then though, Arteta has to get a tune out of the strikers he has, and with that I wish him the very best of luck.

We had a question on the Arsecast Extra as to how many goals we expected from Lacazette and Nketiah between now and May. I said 5. I hope I’m very wrong.

Some extra stuff for Patreon members. First up, our Poorly Drawn Month looks back at January 2022 and all that went on there (a quick sample below): 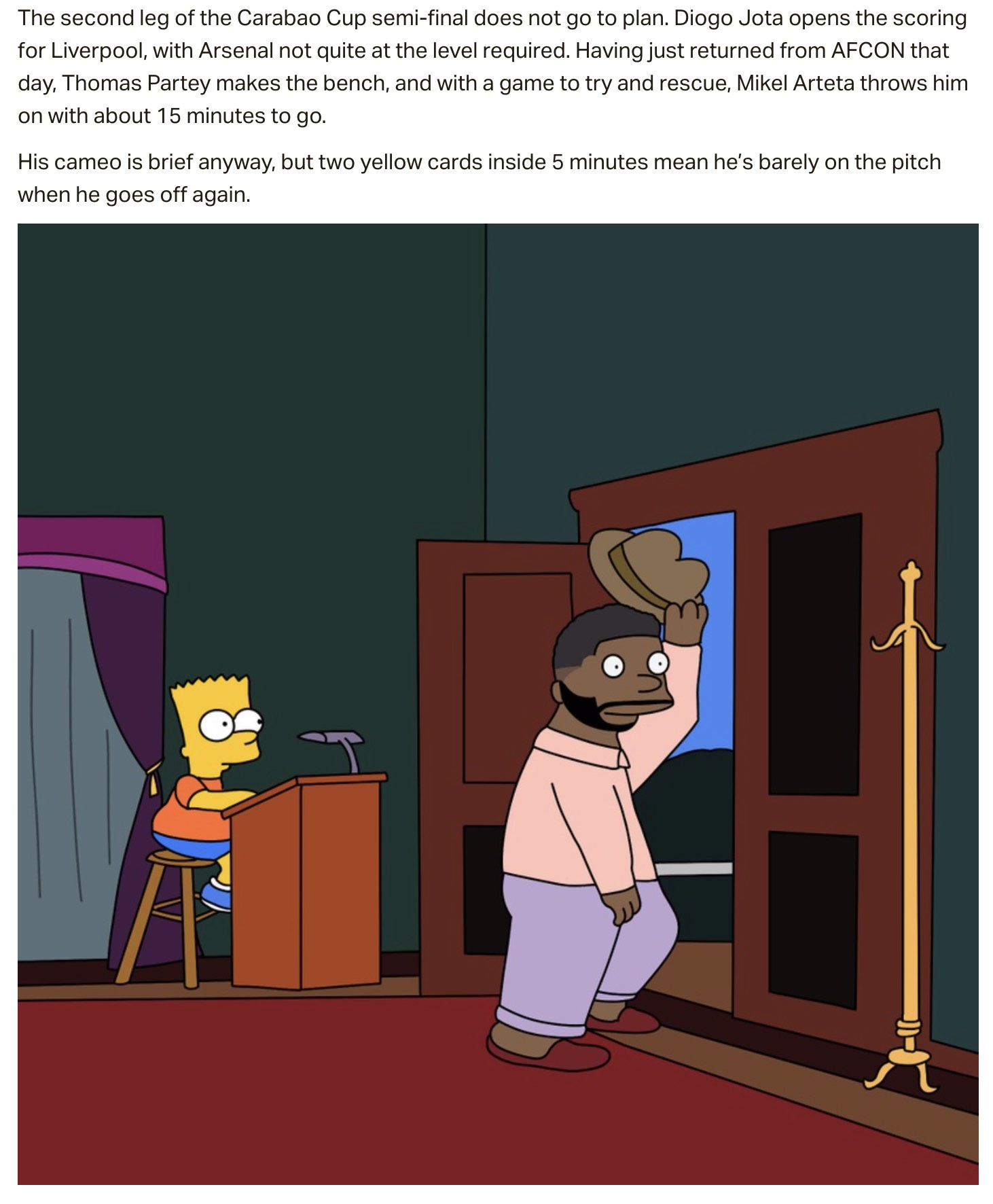 And there’s also an episode of Waffle, the podcast in which James and I talk about anything and everything except Arsenal. All that is available right now at https://patreon.com/arseblog.

That’s it for now, back tomorrow with more and a brand new Arsecast. Until then, take it easy.

The post And in the 6th window, Mikel Arteta bought a striker appeared first on Arseblog … an Arsenal blog.