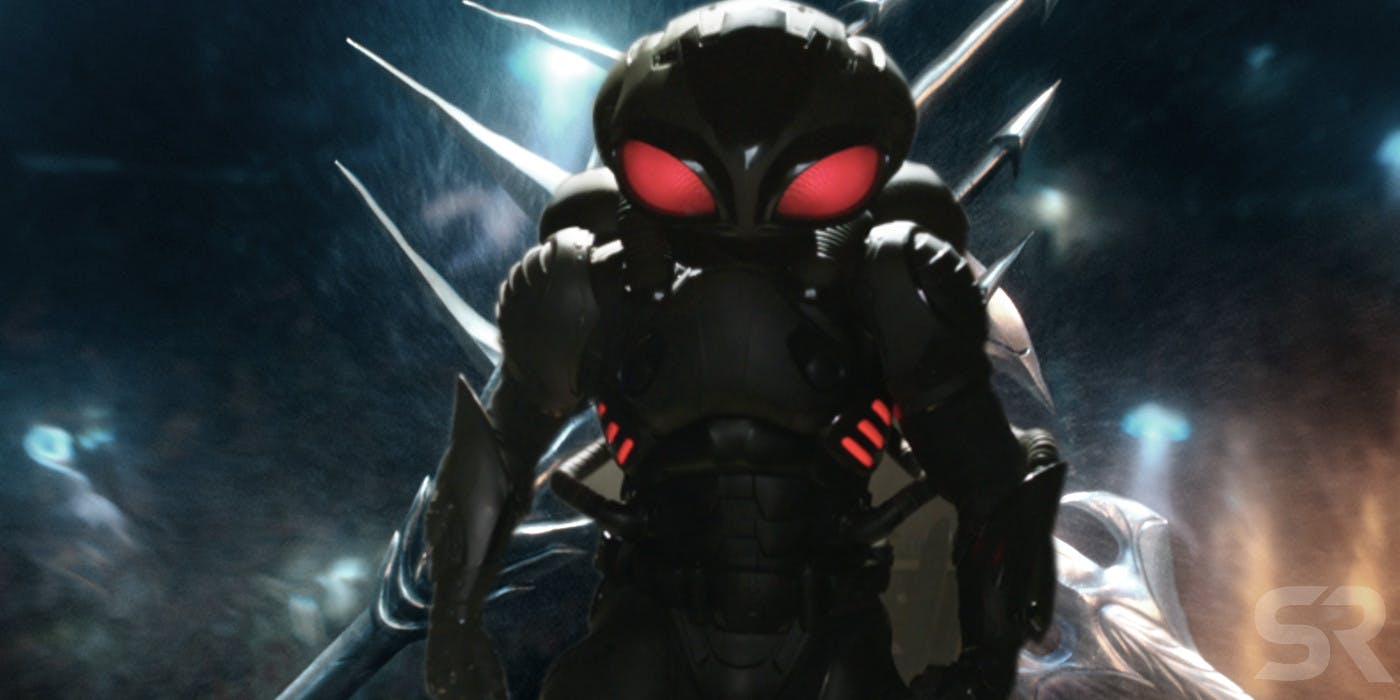 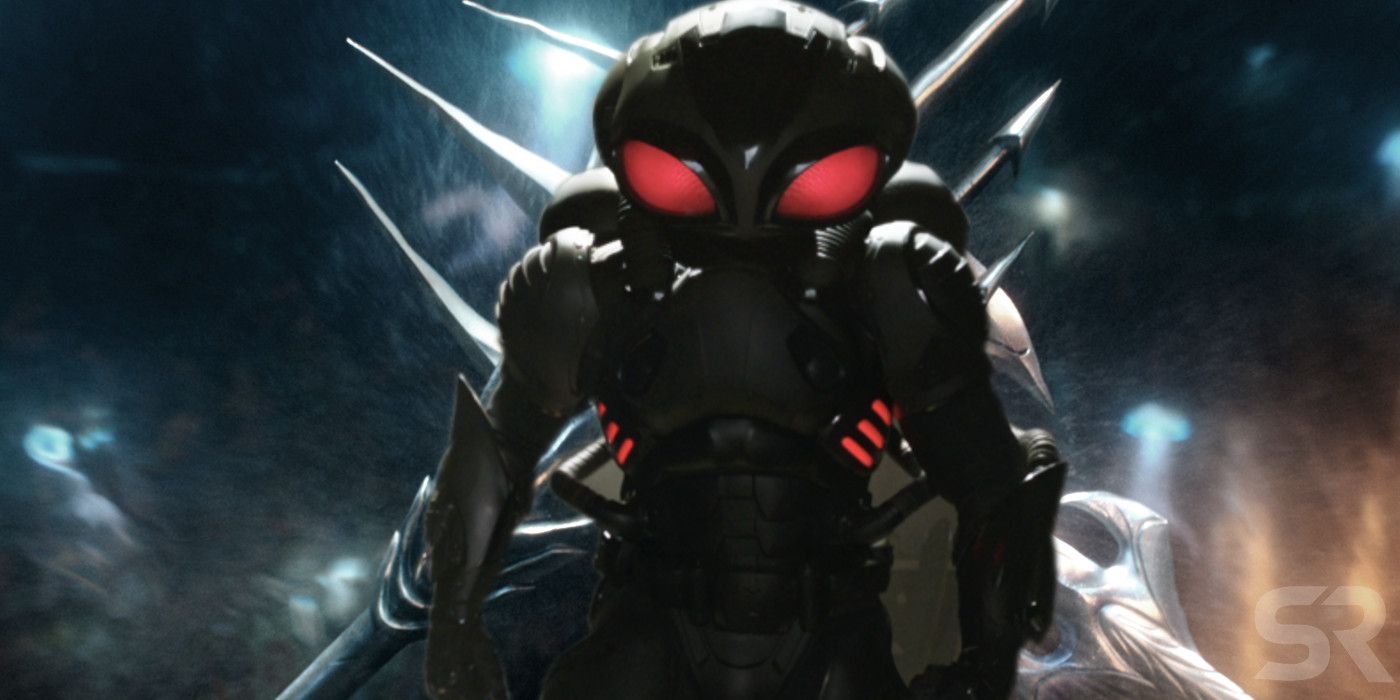 As promised by director James Wan, the first trailer for Aquaman was released today at SDCC 2018. It offered viewers their first big-screen glimpse of DC’s world beneath the waves, with scenes even featuring the City of Atlantis itself.

The character of Aquaman was created by Paul Norris and Mort Weisinger back in 1941, and in the comics he was actually one of the founding members of the Justice League. However, it was only last year when Aquaman made his way to the big screen inJustice League, ahead of his 2018 solo movie. Aquaman will introduce us to the DC movies’ version of Atlantis, with Arthur gaining key allies – and making dangerous new enemies too.

Related: Aquaman: Every Update You Need To Know

The first Aquaman trailer reveals the origin of Arthur Curry, and confirms that this is indeed the battle for the throne of Atlantis. The surface world is in terrible danger, and war will only be stopped if Arthur succeeds in claiming the throne himself. Let’s take a look at the highlights. 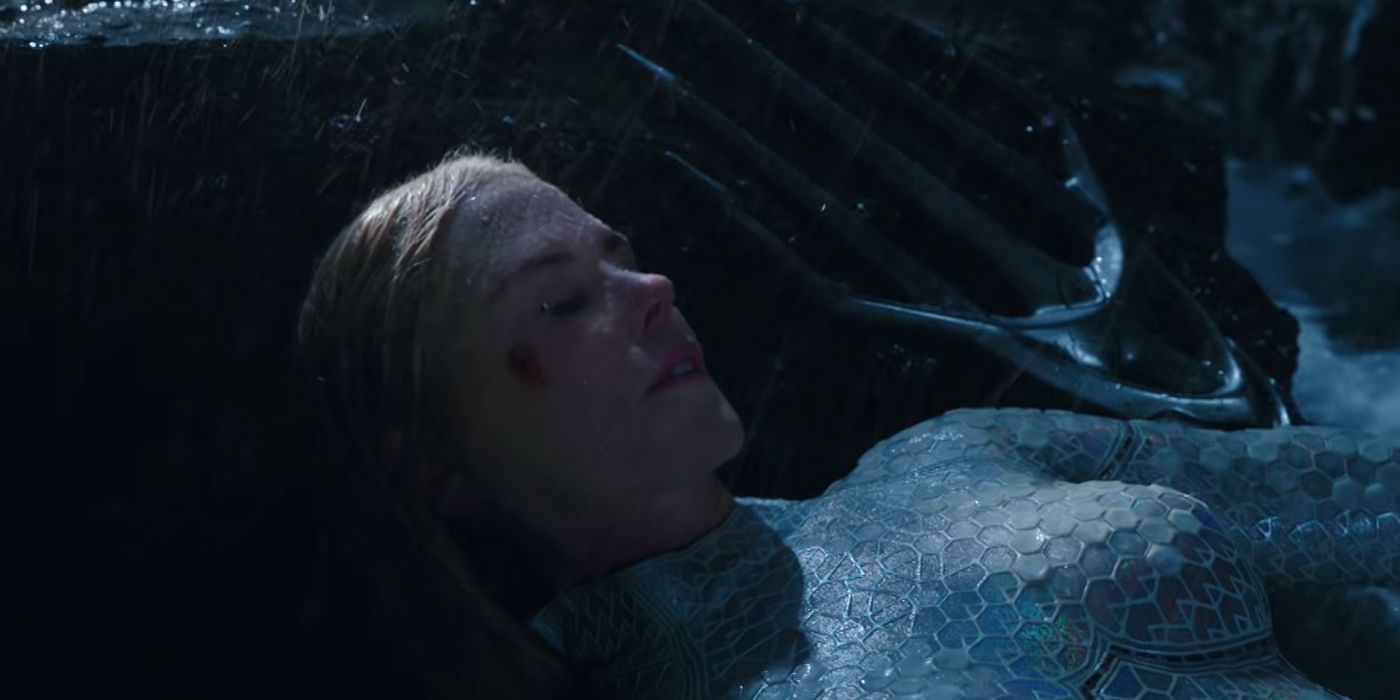 Just like the trailer, the Aquaman movie will begin in the ’80s when lighthouse-keeper Tom Curry discovers the body of Atlanna, Queen of Atlantis, washed up on the beach after a storm. The wind and the waves have tossed Atlanna against the rocks, and she’s badly injured. As seen in the trailer, Tom rescues her and tends to her wounds. As time passes, love blossoms between the unlikely couple, and they have a child – Arthur.

Notice that the trailer doesn’t show any other scenes featuring Atlanna. The Aquaman set visits confirmed that the Atlanteans ultimately came for Atlanna, viewing her remaining on the surface as a betrayal. She was taken away, and Arthur believes she was ultimately executed for this “crime”.

9. Arthur Learns He Can Talk to Fish 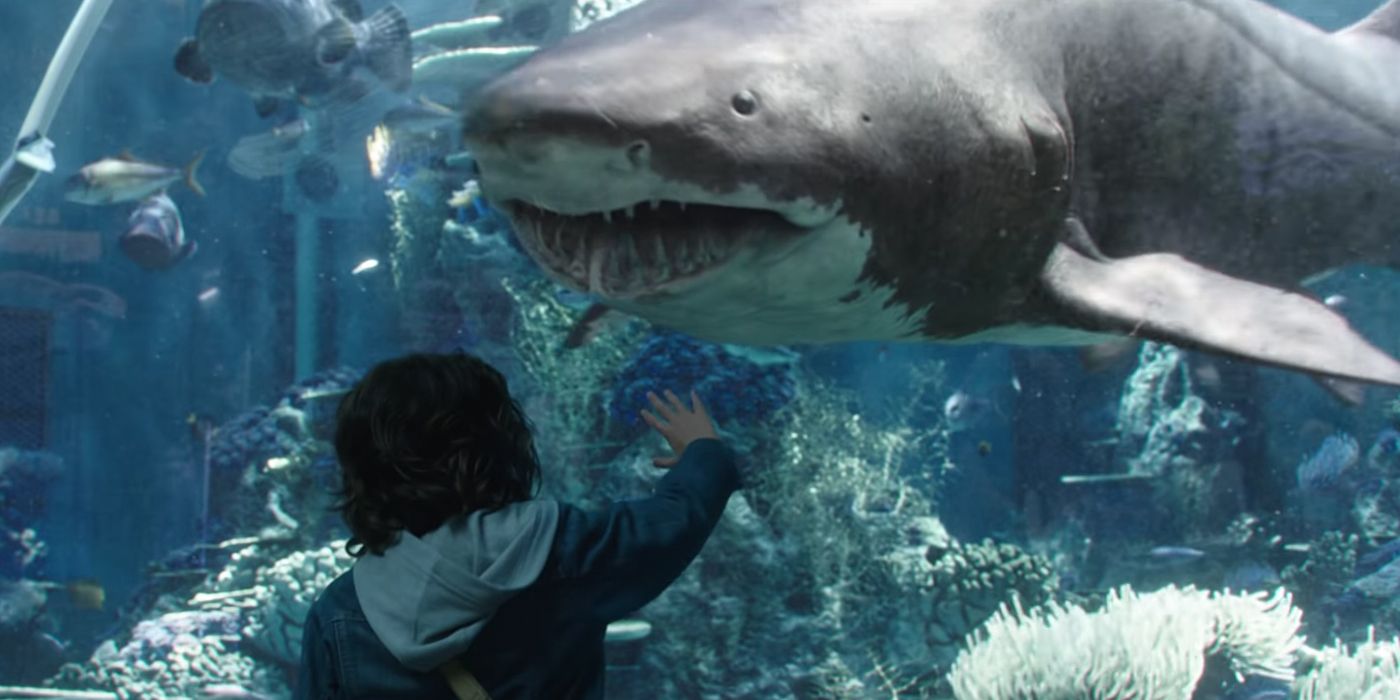 This is one of the film’s flashback scenes, revealing how young Arthur learns he can talk to fish. His school is on a trip to the Boston Aquarium, and Arthur finds himself drawn to the sea-life. This earns the ire of bullies, who mock him for talking to the fish. It’s quite an entertaining nod to the fact that Aquaman is generally derided as a superhero whose primary super-power is the ability to tell fish what to do, but the scene subverts that by showing just how dangerous such a power can be – the bullies are pretty shocked when the sharks come to Arthur’s defense.

There’s an amusing parallel between this scene and Justice League, where one of Bruce Wayne’s first comments to Aquaman is to observe, “I hear you can talk to fish.” Little wonder Aquaman was so annoyed at the comment; Wayne’s half-mocking tone would remind him of the moment he first learned his powers, and of the bullies who hounded him.

Related: Aquaman Can Talk to Fish and That’s OK

8. Mera and the Call to Adventure 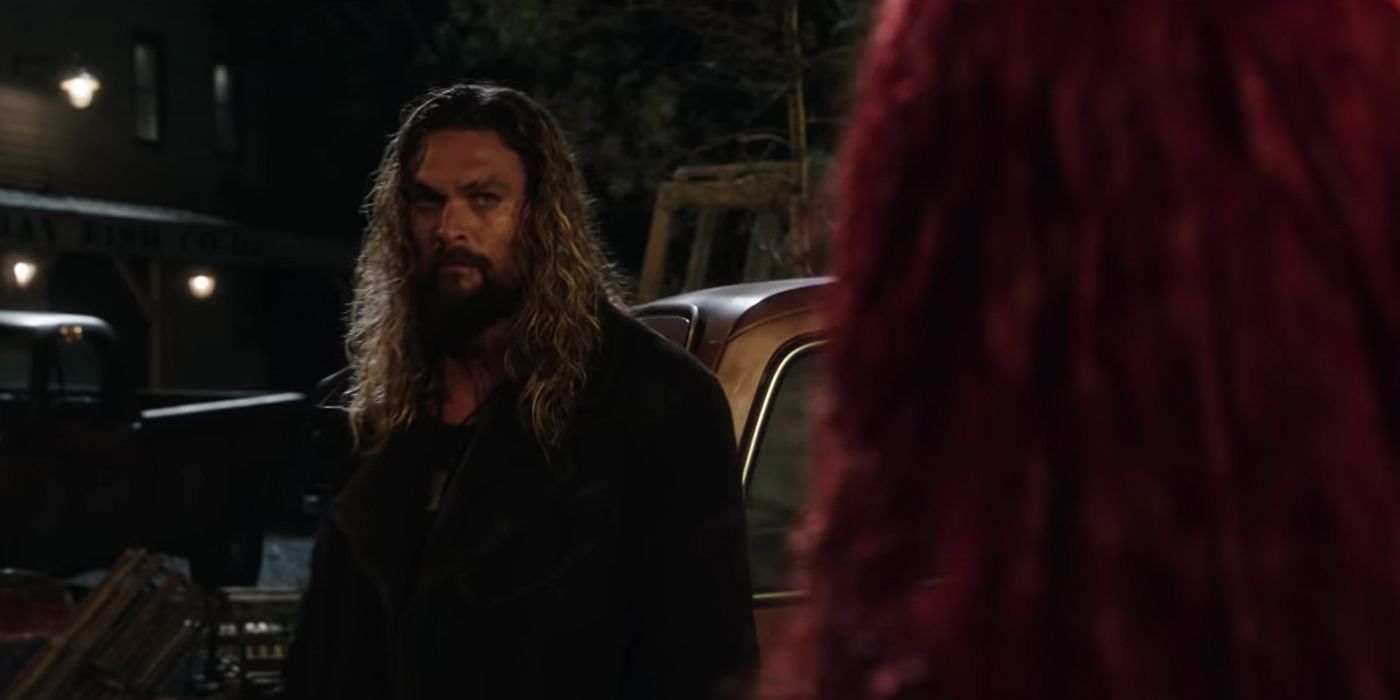 The film seems to follow the traditional “Hero’s Journey” pattern, and this is the Call to Adventure. Mera (Amber Heard) comes to Arthur (Jason Momoa) seeking his help, believing he is the only one who can prevent his half-brother Orm declaring war on the surface world. As seen in the trailer, Arthur initially refuses, insisting he wants nothing to do with Atlantis. Arthur’s mind is changed when Orm tosses a tsunami at Amnesty Bay; as we see in the trailer, the tsunami comes close to almost killing Arthur and his father. 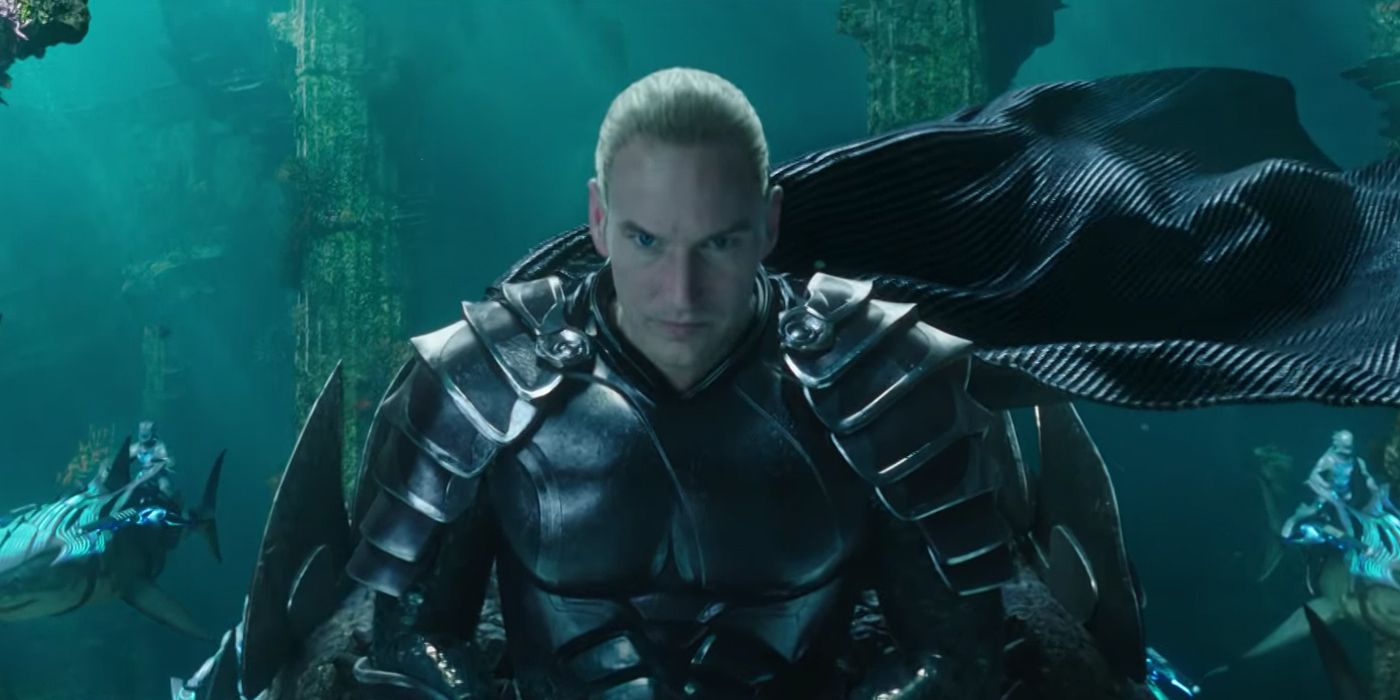 This call is followed by scenes that show King Orm (Patrick Wilson) in his armor, preparing to unleash the wrath of the Seven Seas upon the surface world. Orm’s motives are simple; he blames the people of the surface for releasing pollution into the seas, for killing the coral reefs, for acidifying the oceans. In Orm’s view, it is time for the people of Atlantis to come to the defense of all that is beneath the waves, to teach the surface world that the seas aren’t just a place they can dump their pollutants without care or concern. This motivation is lifted straight from Geoff Johns’s New 52 run. 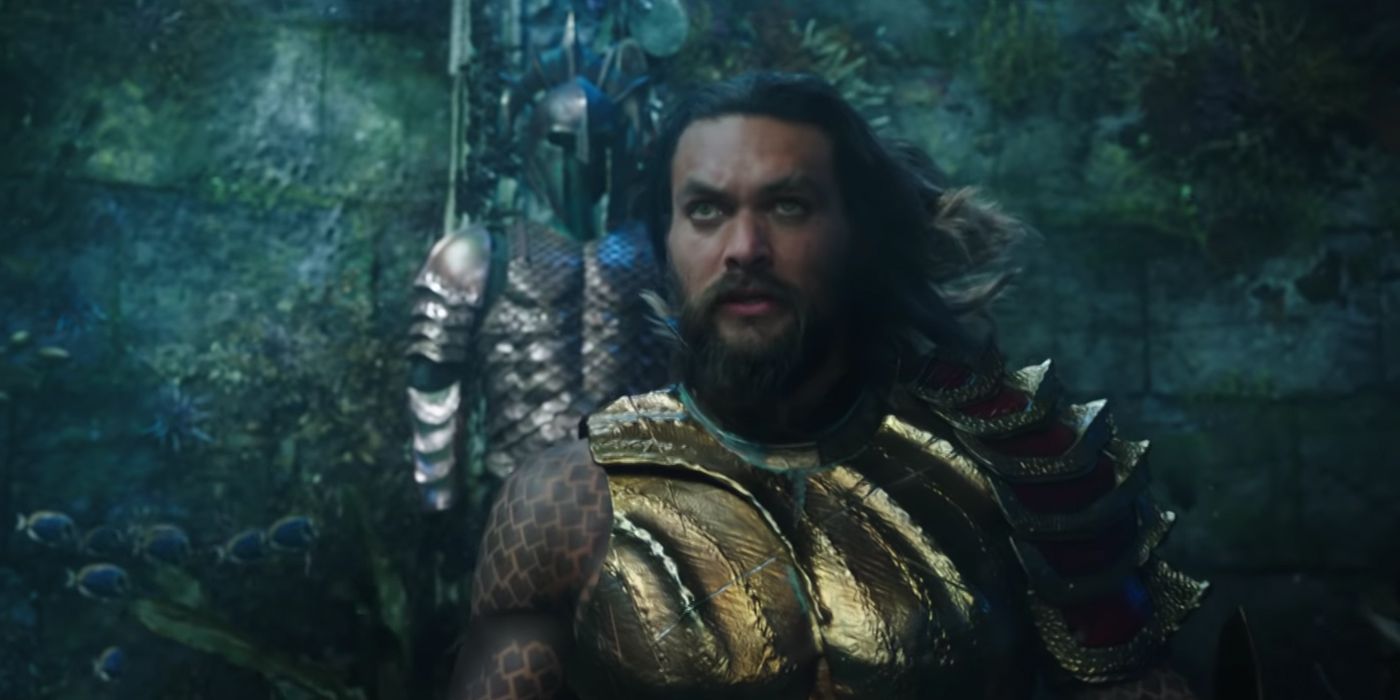 The Aquaman trailer carefully stresses the film’s sense of humor, most notably with one piece of dialogue in which Aquaman criticizes Mera for giving the “worst pep talk ever.” Earlier films in the Worlds of DC range were heavily criticized for their darker tone, and the franchise is pivoting to embrace a lighter, more humorous approach. In stylistic terms, the humor in this trailer is quite a good match for that of Justice League, following on from Joss Whedon’s film. 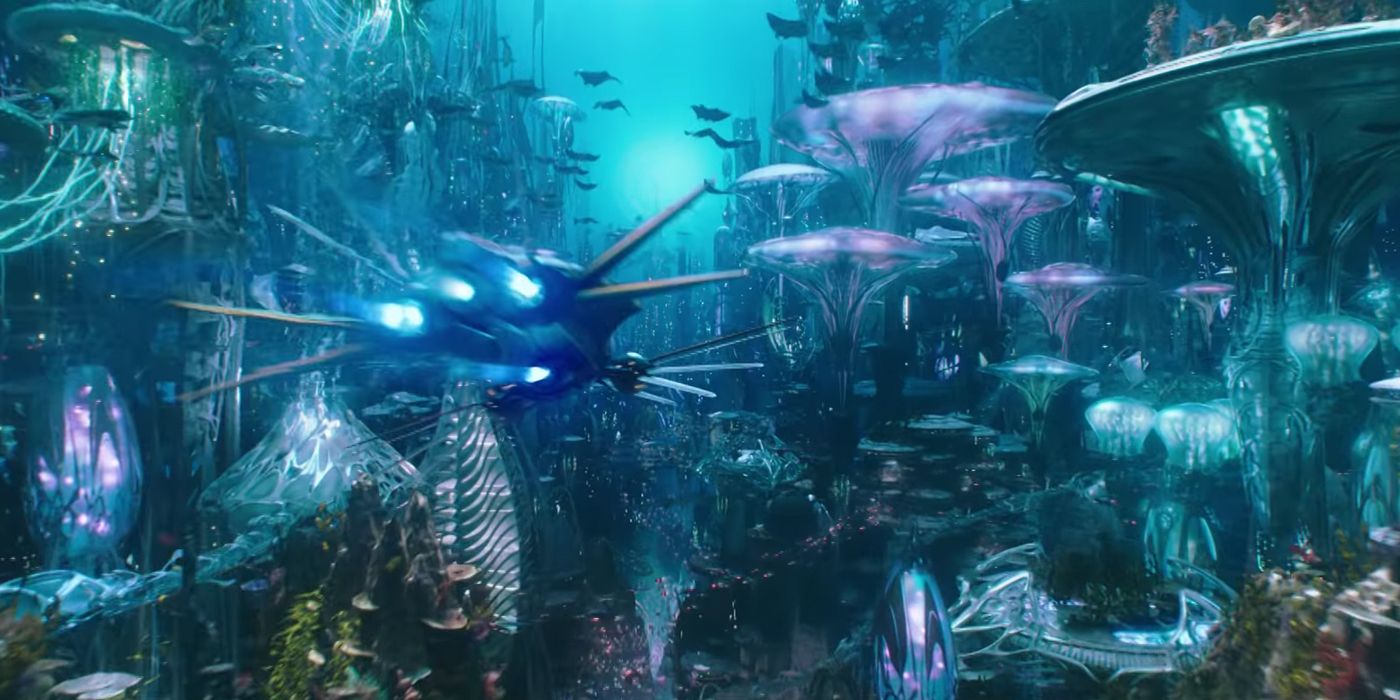 5. A First Glimpse of Atlantis

This is probably the single most important scene in the film. Any hero is only as interesting as the world he inhabits, and the writers and directors of Justice League deliberately left our first glimpse of Atlantis for Aquaman. The design is beautiful, a blend of the comic book concepts and the sealife you find around coral reefs. In fact, it honestly looks as though the city is built into the side of a reef. This may well explain why Atlantis feels threatened by humanity’s pollution; rising sea temperatures and the acidification of the oceans are killing off the reefs. It’s possible pollution is literally destroying the City of Atlantis.

Related: Aquaman Character Guide: Everything You Need To Know About Atlanteans & More

4. The Battle for the Throne 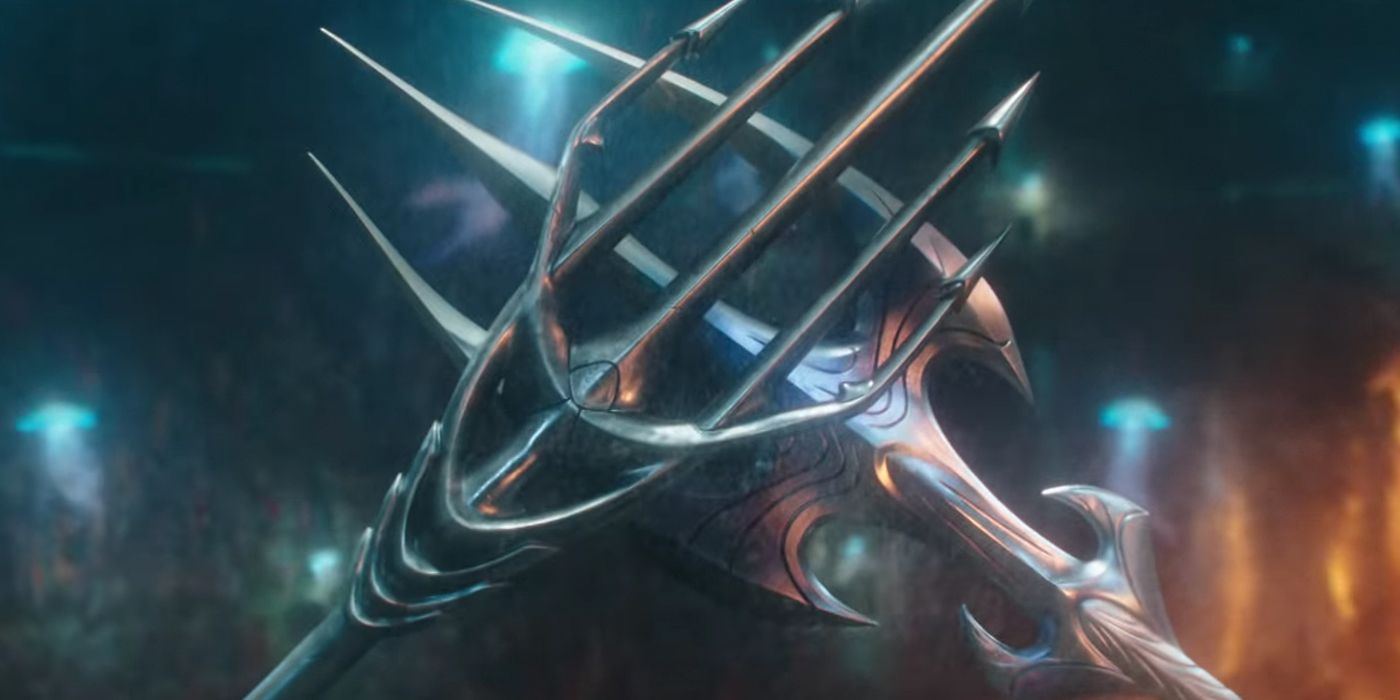 This next sequence was described to journalists as part of the set visits last year, and seems to be one James Wan is particularly proud of. It sees Arthur Curry and Orm engage in ritual combat for the throne of Atlantis, and will remind many viewers of a similar scene in Black Panther. In this case, the duel takes place in some sort of volcanic collapse pit, presumably part of the Mid-Oceanic Ridge.

While it’s quite rare, it is possible for lava to flow like this on the sea-floor.  The area Arthur and Orm are battling in would be extremely hostile; it’s impossible to guess what temperature the waters would actually be at. That said, in Aquaman, your average Atlantean is almost as powerful as a Kryptonian, so no doubt these inhospitable conditions wouldn’t be too problematic for the combatants. 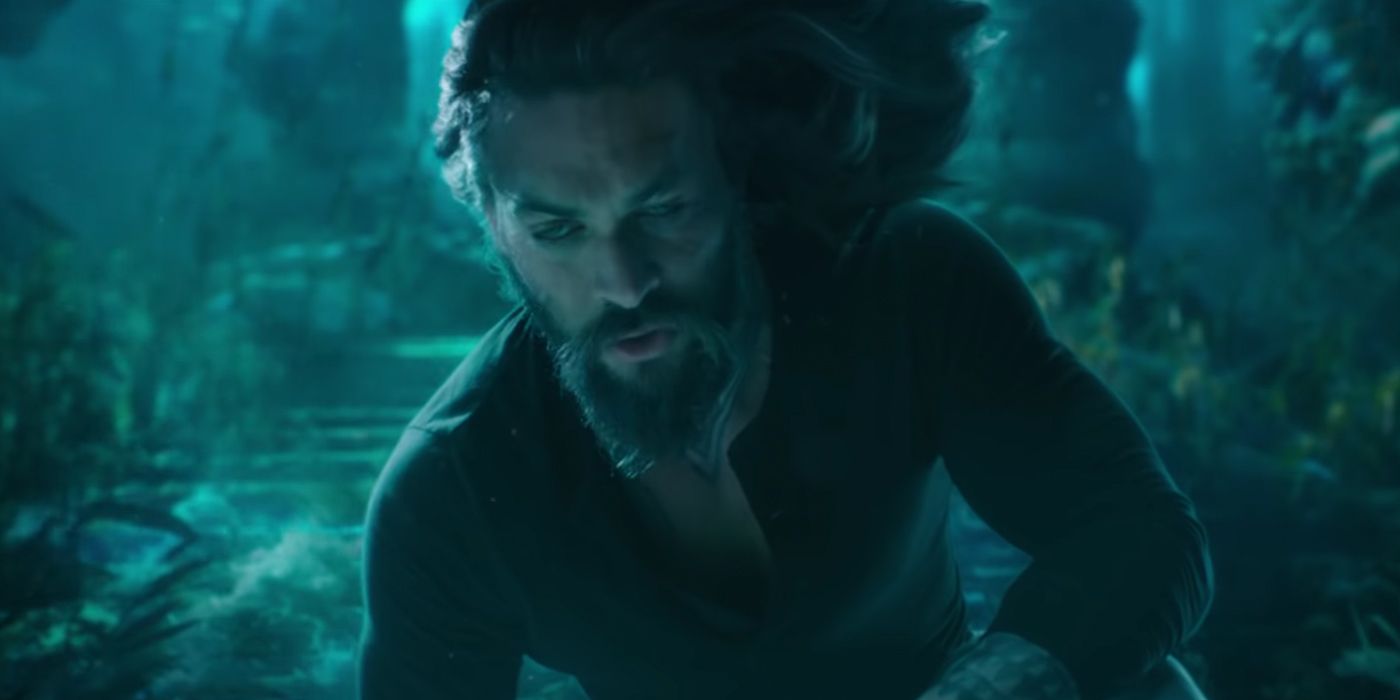 Ultimately, however unwilling he may be, Arthur is destined to take the throne of Atlantis. Fortunately, he’s not alone; the film stresses the relationship between Aquaman and Mera, and while there are hints of romance, it’s clear she’s no mere love interest. Mera is portrayed as every bit Arthur’s equal, and the relationship between the two is essentially a partnership. No doubt their romance will blossom over possible sequels, which will explore Arthur’s struggle to lead the Atlanteans and make peace with the surface world. 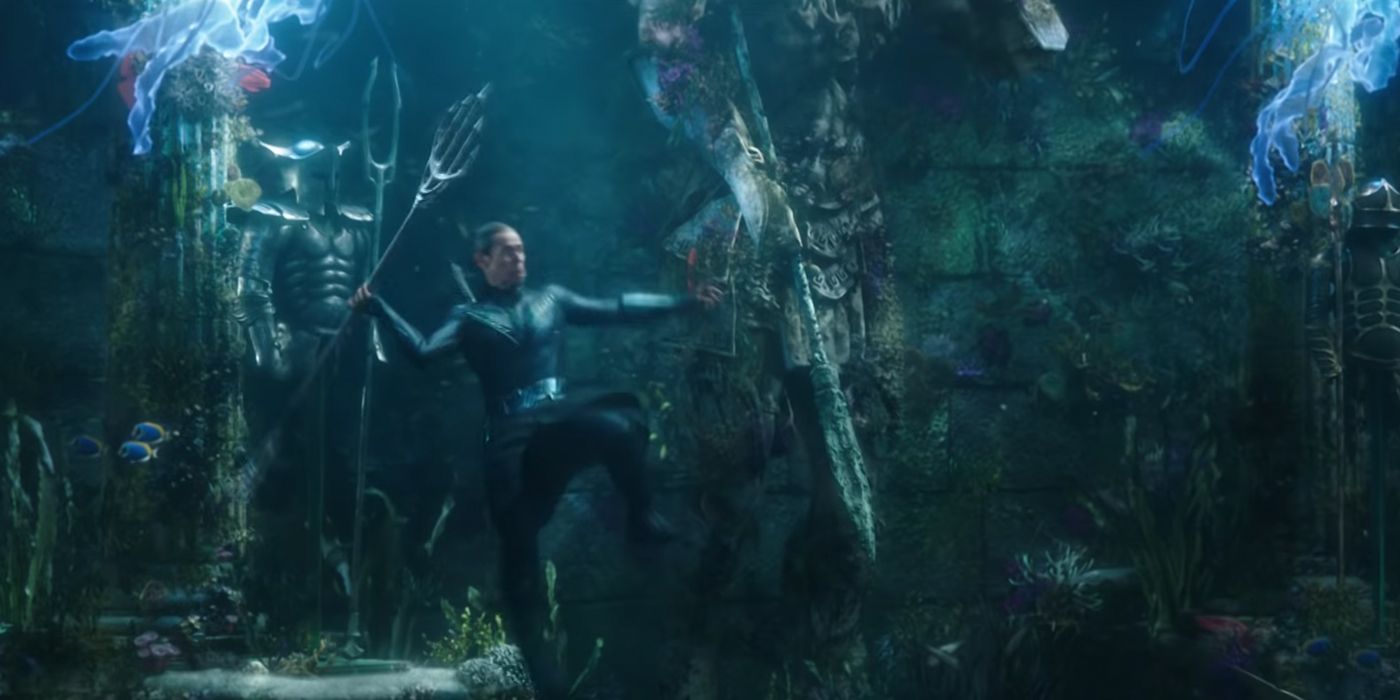 This is Vulko, played by Willem Dafoe. The chief scientific adviser of Atlantis, Vulko was originally intended to appear in Justice League, but all those scenes were cut from the final film. Vulko is a classic Aquaman supporting character, and in the comics he’d go on to become Aquaman’s regent. In the New 52 continuity, Vulko’s mother was murdered by Orm, and he wound up cast out of Atlantis. Given Aquaman seems heavily influenced by that run, he’s likely to become one of Arthur’s most important allies. 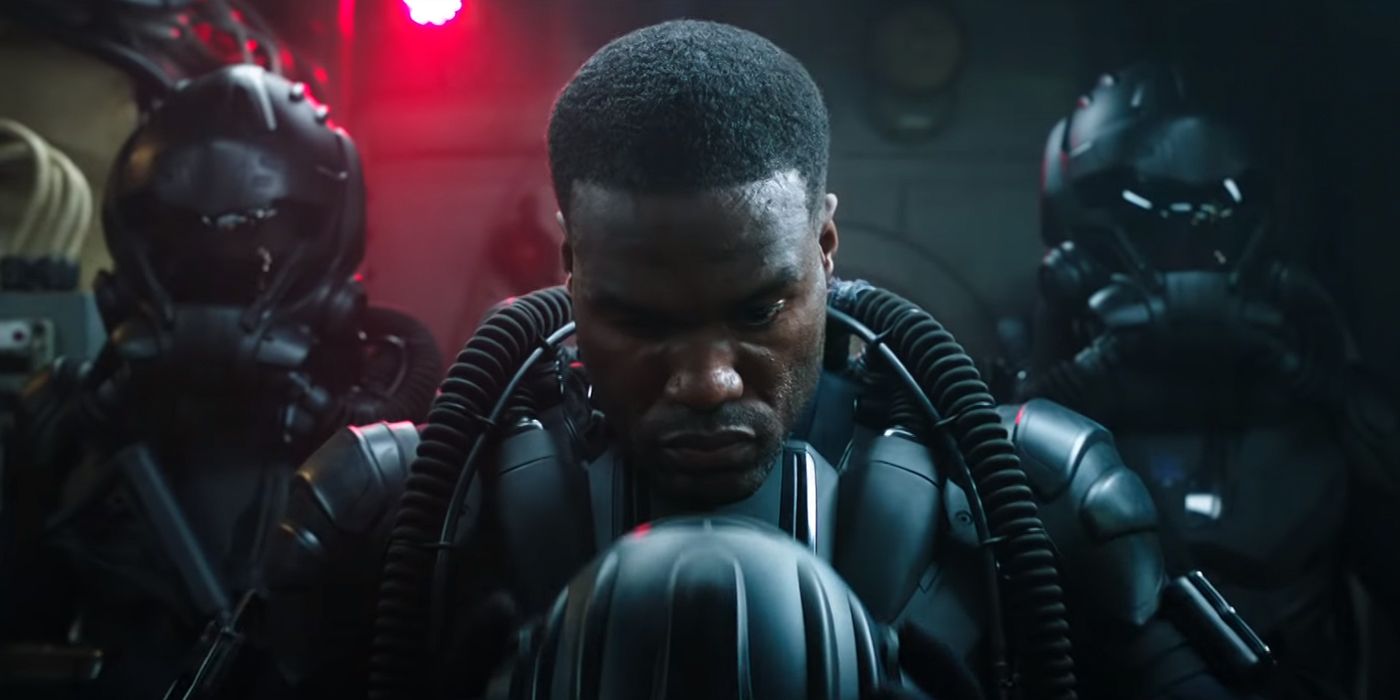 The trailer only gives a brief glimpse of Black Manta, the secondary villain of Aquaman. He starts off as a pirate, one who falls foul of Aquaman – and is left seeking vengeance. In a recent interview, actor Yahya Abdul-Mateen II suggested that Black Manta’s first encounter with Aquaman leads to the death of his father, and Black Manta blames Arthur Curry for it. He’s recruited by King Orm to work against Aquaman, and relentlessly pursues the would-be King of Atlantis. The character is intended to appear again, with the actor signed up for other films. “I think we try to talk about him as a guy who has the potential to be a pretty big force within the world,” Yahya Abdul-Mateen II explained.