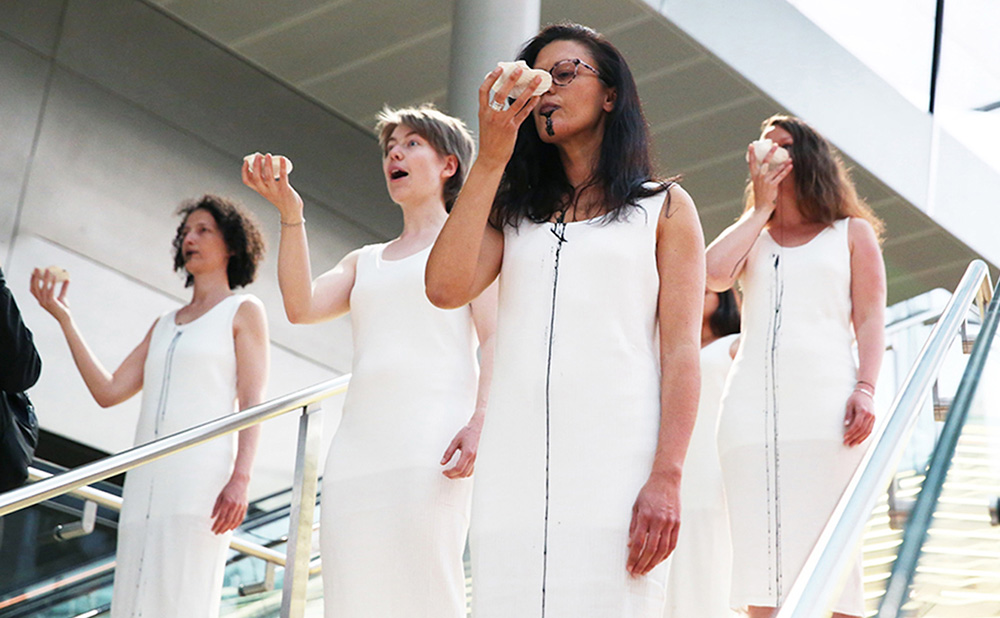 Is it ever ethically responsible for a museum to finance its operations with money from businesses known for their environmental and human rights abuses? That’s the question facing cultural institutions today as activists continue to demand better financial stewardship in the arts. It’s also context for the recent decisions of two Dutch museums — the Van Gogh Museum in Amsterdam and the Mauritshuis in The Hague — to end to their years-long partnerships with the multinational oil and gas company, Royal Dutch Shell.

Officially, the energy company says that both decisions were mutual, but a recent museum report obtained by The Art Newspaper indicated that the Mauritshuis saw the Shell sponsorship deal as “crucial” for its long-term future. The company has supported the museum for the last six years, which included substantial funding for technical research on paintings by Dutch artist Jan Steen.

The Van Gogh Museum’s director, Axel Rüger, portrayed his institution’s relationship with Shell as “an extremely rewarding collaboration” in a statement eulogizing their shared 18-year history. Over the past five years, Shell funded technical research on Van Gogh’s 1880–90 paintings. Publication of the resulting catalogue is still years away and likely now in jeopardy without the oil company’s financial support. Issues of ethical apathy have plagued the museum industry for years, and cultural institutions increasingly face demands by activists and patrons to end their business relationships with fossil fuels, in particular. After repeated protests, the Tate finally announced in 2016 that it would end its sponsorship agreement with BP after 26 years.

Similarly, both Dutch museums that ended their partnerships with Shell have faced guerrilla demonstrations by organizations like Fossil Free Culture NL, a group dedicated to divesting art in the Netherlands from oil.

“Through unsolicited art performances in institutions that accept such sponsorship, we expose the ecological and social devastation that the fossil fuel industry inflicts on the planet, and lay bare the way these cultural institutions actively sanitize the reputation of companies like Royal Dutch Shell,” a spokesperson for the group told Hyperallergic,

Most recently, the group staged a protest performance, called “End the Fossil Fuel Age Now,” at the Van Gogh Museum on June 9. The action featured 12-meter high texts that read, “END THE FOSSIL FUEL AGE NOW.” This was the concluding act of the group’s six-week Art Storm, which brought several protest demonstrations to the museum’s door, including “Shell’s Dirty Hands” and “Shells Everywhere.”

In 2017, members of Fossil Free Culture were arrested at the museum after security guards called the police on their “Drop the Shell!” performance, during which seven people sipped an oil-looking liquid from seashells as a performer recited a passage from a Vincent van Gogh letter to his brother about rising waters and the struggle to survive.

The 2017 Carbon Majors Report found that just 100 companies are the source of more than 70% of the world’s greenhouse gas emissions since 1988. Shell, along with ExxonMobil and BP, are listed as some of the highest emitting companies in the world.

“Fossil fuel companies fund cultural institutions to clean up their public image. This recognized marketing strategy is known as art-washing. For a tiny slice of their enormous PR budgets, oil and gas companies are able to buy a false image of cultural and societal generosity,” said Fossil Free Culture’s spokesperson. “Their motivation has nothing to do with cultural benevolence; it is a strategy to secure the social respectability they desperately need to continue their destructive business as usual.” Despite the group’s best efforts, Shell’s retreat from the Netherlands’ art scene doesn’t necessarily indicate that the company is shirking its shroud of cultural patronage. Just one month ago, the Science and Industry Museum in Manchester, UK announced that Shell would sponsor its new exhibition, Electricity: The Spark of Life. The British environmental activism group, Culture Unstained, has been fighting the sponsorship deal since it was announced.

“For a museum of science to partner with one of the world’s most unethical fossil fuel companies — and just as the Van Gogh Museum and the Mauritshuis were preparing to cut their ties to Shell — exposes how out of touch the [Science and Industry Museum] is,” wrote Culture Unstained’s Chris Garrard in an email to Hyperallergic. “It’s deeply concerning that the museum was fully aware of Shell’s human rights violations, its links to the spread of climate disinformation, and its extensive environmental impacts but chose to go ahead with the deal regardless.”

A petition against that museum’s decision has amassed over 56,000 signatures. Already, one of the exhibition partners has pulled out of the show in protest alongside 50 respected scientists and researchers who have sent an open letter to the museum’s director against the Shell sponsorship decision.