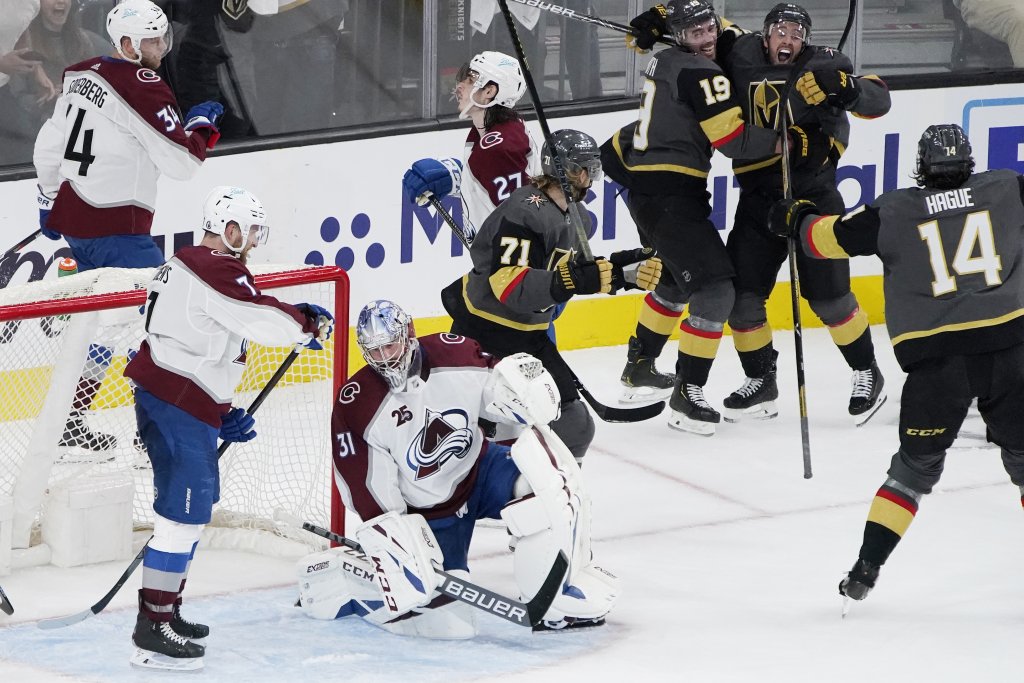 The Vegas Golden Knights are slight -110 home favorites over the Colorado Avalanche in Game 4 of their Stanley Cup West Division final series on Sunday, June 6th
Colorado is given odds of -105 to win the game and claim a 3-1 series lead
Vegas is 3-2 straight up at home during the playoffs

The Colorado Avalanche were less than six minutes away from a 3-0 stranglehold on their Stanley Cup West Division final series against the Vegas Golden Knights. Leading 2-1, the Avs gave up two goals in 45 seconds and lost 3-2.

Colorado is still up 2-1 in the best-of-seven series. As the teams prepare for Game 4 of the series in Vegas on Sunday, the betting line is equally tight.

The Golden Knights are established as the ever-so-slight -110 favorites to take Game 4 at home and pull even in the set. Colorado, though, is set at -105 to get the win. The last two games in series were one-goal decisions. Over the past six meetings between the two teams, the spread has failed to cover four times.

Odds as of June 5th

No hidden fees on deposits or withdrawals

Game time Sunday at T-Mobile Arena is set for 8:30pm ET. NBCSN is carrying the broadcast.

Colorado coach Jared Bednar wasn’t pulling any punches during his media session following the Game 3 failure of the Avalanche.  Bednar was adamant that the team needs more from their stars. He was blasting his club for being outworked by the Golden Knights.

Mark Stone and Nathan MacKinnon shared the ice for 10:37 at five-on-five tonight.

The Knights led 1-0 in goals and 11-4 in scoring chances in that time.

Stone said MacKinnon's line is one of the best in the league, but his one thinks they are too. #VegasBorn

The Colorado coach pointedly noted that Vegas had outplayed his team over the past five periods of the series. He specifically opted to single out his top forward line of Nathan MacKinnon, Mikko Rantanen and captain Gabriel Landeskog. In the third period, Bednar even went as far as to bump Landeskog to the second line. Andre Burakovsky shuffled into his spot on the top unit.

Gabriel Landeskog on coach Jared Bednar: "I think Bedsy has shown his passion and urgency in the last four or five years we've had him. … To us he's always honest and tells us what he thinks. And we agree with him."

Bednar noted how badly his top group was outplayed in Game 3 by the Vegas #1 unit of Chandler Stephenson, Max Pacioretty and Mark Stone.

The numbers bear out Bednar’s thesis. The Vegas top line combined for 10 shots in Game 3. Eight were from Pacioretty, who tallied the game-winning goal. Colorado’s top trio added up to one goal and a combined -3 rating.

The so-called Misfit Line of the Golden Knights were also a big factor in Game 3. The unit of Jonathan Marchessault, William Karlsson and Reilly Smith scored two of the three Golden Knights goals.

DeBoer on the Karlsson, Marchessault, Smith line- "They're the identity of this franchise. They've all been overlooked at some point during their career. They hop over the boards every night and are hard to play against. That chemistry is hard to replicate."

They’re named the misfits because each was abandoned by the their teams during the 2017 NHL Expansion Draft that stocked the Golden Knights. Smith is the club’s all-time playoff leader in assists (34) and points (47).

He’s played in all 57 Vegas playoff games and is one of 19 players in NHL history who have skated in each of a franchise’s first 50 all-time playoff games.

Vegas forward Mattias Janmark (undisclosed) hasn’t skated since he was hit by Avs defenseman Ryan Graves in Game 1. Forward Tomas Nosek (undisclosed, believed to a shoulder injury) has missed the past eight games.

Janmark, Nosek, defenseman Brayden McNabb (COVID-19 protocols), out the past five games and backup goalie Robin Lehner (undisclosed) are all listed as questionable for Game 4.

Vegas has outshot Colorado 84-45 over the past two games. The Game 3 loss brought an end to the Avalanche’s 11-game winning streak.

The Avs have lost more than one game in a row just once through their past 40 games. That was a three-game losing skid in late April when Colorado had just returned from a COVID-19 shutdown.

Pete DeBoer- “There weren’t many people picking us at the beginning of this series, and the ones who were on that raft, I think I saw jumping over the edge with life jackets after Game 2… We think we can play with this team, and we’re using that as motivation.”

This article contains links to external sports betting services. SBD may receive advertising revenue from these links, however editorial has hand-picked each individual link based on relevance to the article, without influence on the coverage.