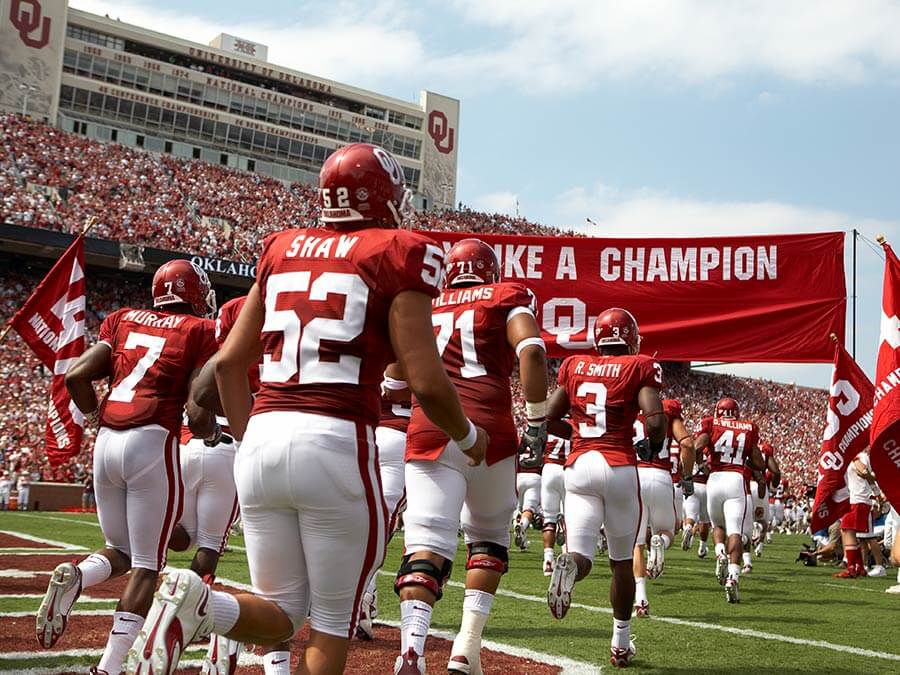 The Baylor-Oklahoma point spread has moved 1.5 points in the Bears’ favor
The game total has moved up 2.5 points at the same time
Will the odds shift further before the Big 12 title game on Dec. 7th?

The point spread has dropped this week, seeing the Sooners move from 9.5-point favorites to 8-point favorites. Simultaneously, the game total has moved up 2.5 points, going from 62 to 64.5. Both teams are on the bubble in the latest College Football Playoff rankings.

Why have the lines moved? And will they continue to do so? Let’s investigate and make a prediction.

Drop Me a Line

With Oklahoma opening as a nearly 10-point favorite at Jerry World in the Baylor vs Oklahoma Big 12 Championship odds, you figured the line might drop a bit as we headed to kickoff.

Yes, AT&T Stadium has turned into Norman South the last two seasons — with OU capturing the back-to-back Big 12 Championship game victories (and with them back-to-back berths in the CFP). But considering Baylor blew a 21-point second-half lead only to lose 34-31 at home against Oklahoma in Week 12, these teams are fairly evenly matched.

As I mentioned earlier in the week, this is a major revenge game for the Bears. With a win on Saturday, Matt Rhule’s program might just sneak into the CFP if LSU can handle its business against Georgia in the SEC Championship game and Oregon knocks off Utah in the Pac-12 Title tilt. Both of those scenarios are quite possible, and bettors are liking the Bears.

While Oklahoma has been known for its offense under Lincoln Riley, OU’s defense isn’t as awful as it was last season. The Sooners lead the Big 12 in total defense after finishing last in that category a year ago.

Baylor ranks third in the conference in total defense, but leads in scoring defensive, holding opponents to just 18.4 points per game.

The offenses rank No. 1 and No. 2, respectively, in the Big 12 in terms of scoring (though Baylor’s 36.2 PPG is a distant second to OU’s 44.3 PPG). The defenses may wind up deciding this game, much like the Sun Belt Championship game between Louisiana and App State, which is why Baylor might be able to hang with OU Saturday.

The Bears program has been on the cusp before. Back in the height of the Art Briles era five years ago, Baylor was close to making the first version of the CFP. But the Big 12’s lack of a title game kept them out.

The conference learned from its mistake, brought back the title game in 2017, and lo and behold, Oklahoma has represented the conference in the four-team field the last two seasons.

As the line has dropped and the total has risen, I expect both to level out. Oklahoma is still really good in big games of late, and these teams may just cancel each other out on offense. If you’re looking for betting angles, consider the under. Low and behold