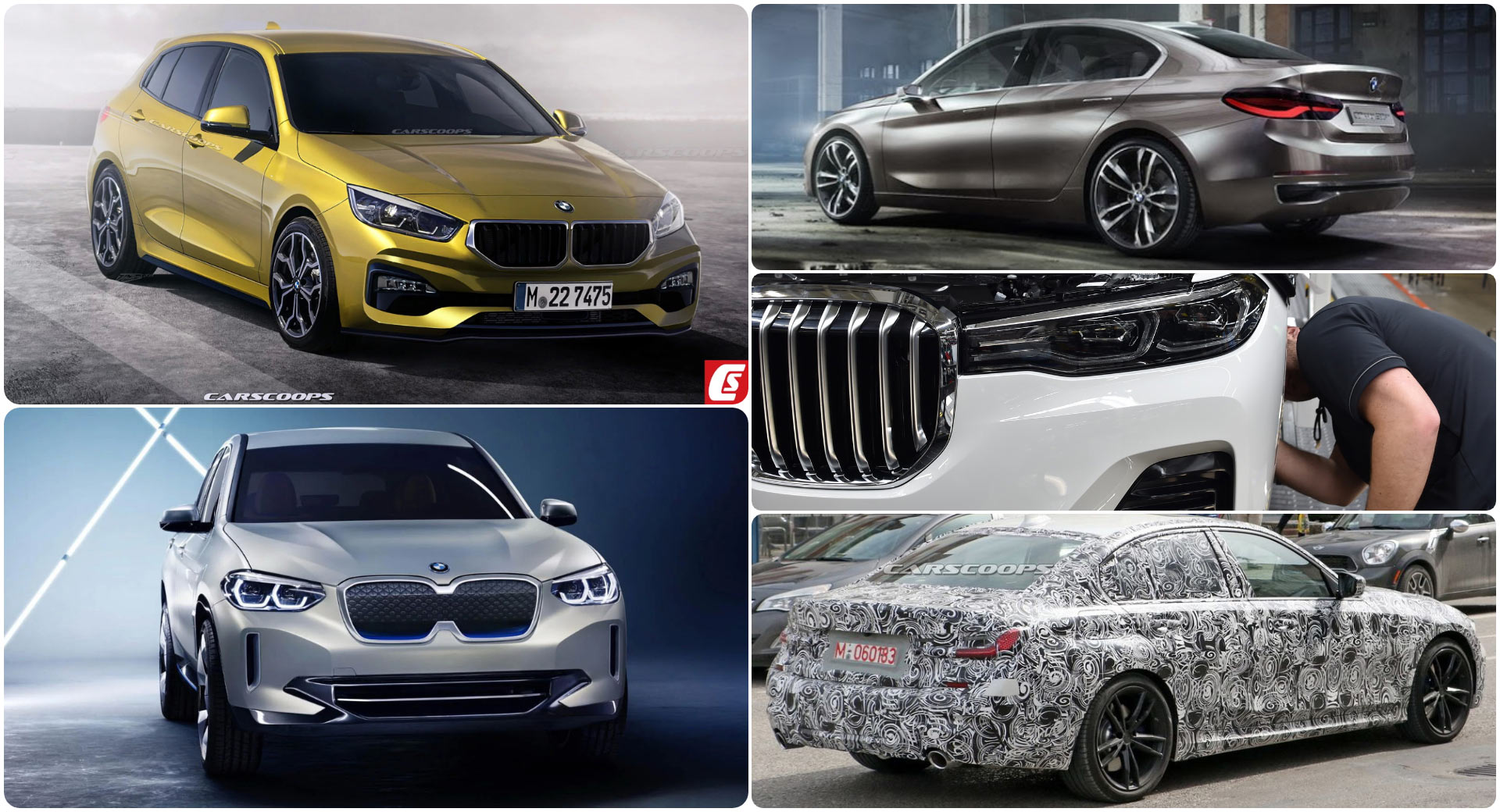 There are a lot of new BMW models coming over the next years as the Bavarian car maker has been working nonstop to refresh its entire model range.

Highlights include the wide adoption of the CLAR scalable platform, ranging from models as small as the next 3-Series and all the way to the top of the line-up, which includes the recently launched 8-Series, as well as the upcoming X7 flagship SUV.

In addition, BMW will complete the switch of its more affordable models from rear- to front-drive platforms with the new 1-Series, allowing for the shared use of components with future Minis to achieve greater economies of scale.

As far as new technologies go, we’re going to see features previously exclusive to the firm’s expensive cars trickle down the ladder and into the more mainstream vehicles. Things like digital instrument clusters and bigger infotainment screens are a given but semi-autonomous technologies and a wide range of driver assistance systems will also find their way into models like the 3-Series.

New electrified powertrains will be introduced, with hybrid and plug-in hybrid models to be offered alongside the usual petrol and diesel engines. BMW will retain diesel units in its European range, at least for the next couple of years.

The next two years are going to be really busy for the Bavarian automaker, as they plan to launch around 20 new models in the market. Let’s take a look at the cars we know are coming. The new 8-Series Coupe will reach showrooms later this year, offering an engaging driving character paired with a luxurious cabin and cutting-edge technologies. The twin-turbo 4.4-liter V8 is new, sending 523hp (530PS) and 553lb-ft (750Nm) of peak torque to all four wheels via an eight-speed automatic transmission. The fourth-generation X5 is a completely new model and the latest one to benefit from the adoption of the CLAR platform. Slightly bigger than before, the new X5 will be offered with turbo six-cylinder and V8 engines once it’s launched this fall. We’re just weeks away from BMW lifting the veil off the new Z4, the company’s new roadster. Apparently the new two-seater BMW will offer a proper sporty driving experience, at least in the range-topping M40i version which gets its motivation by a twin-turbo 3.0-liter straight-six unit. The new chassis, which is shared with the new Supra, will make use of carbon-fiber bits to shed some weight too. Three years after its release, the X1 will receive a mid-cycle update that will include a mild makeover with restyled front and rear fascias on the outside, and BMW’s latest tech features inside, including an improved infotainment system. Changes to the engine range should help improve fuel economy and CO2 emissions. Expected at the end of this year, the performance version of the X2 with the M35i moniker will be powered by a  2.0-liter turbocharged four-cylinder delivering  around 300 horses. The X2 M35i’s 0-60 mph time could dip into the low 5-second range while top speed should climb to 155 mph (250 km/h). BMW won’t be making an M3 Touring any time soon, but if it’s practicality you’re looking for with your M3 mechanics, then the X3M could be a solution. Like its X4M sibling below, it will get a new S58 straight-six turbo with 450+ horsepower and standard all-wheel drive. A reworked chassis and a bulkier body kit and wheels will be part of the package. For the first time, BMW’s compact-luxury coupe SUV will be offered in a pure M version. It will get the brand’s new S58 3.0-liter inline six-cylinder engine complete with a pair of turbochargers delivering at least 450 hp to all four-wheels through an automatic transmission for a 0-62mph in the low 4 second range. The third generation of the X6 will have plenty of competition when it arrives next year, as Audi has already launched their new Q8 while Porsche will join the coupe-SUV foray with the Cayenne Coupe. The G06-codenamed BMW X6 is based on the just released X5 with its styling resembling the latest X4 on a larger scale. It will get the same powertrains as the X5 with a selection of turbochaarged six-cylinder and V8s. BMW’s ever-growing range is set to get a proper Range Rover rival in the form of the new X7. Previewed by a concept, the new full-size X7 SUV will take its place on the top of BMW’s offering alongside the 7- and 8-Series, based on the company’s CLAR architecture. BMW will launch an EV version of the X3 in 2020. The new German electric SUV will pack a 270hp electric powertrain and a 70kWh battery pack. The 2020 iX3 will offer around 250 miles of driving range (400km) and be able to fully charge in 30 minutes when hooked up to a 150kW quick charger.

BMW’s electric powertrain integrates the motor, transmission and control module into one component, making it easier to use in a variety of models, including those originally designed for ICE powertrains. Production of the new BMW iX3 will take place in China in 2020. Joining us from the other end of the spectrum, the next 1-Series is expected to make its debut towards the end of the year. The baby BMW will no longer be a rear-driven compact model as it switches to the front-driven UKL2 platform which already underpins models like the X1 and X2, as well as various Mini models. Faster versions (M140i and possibly an M130i) are expected to feature all-wheel drive. BMW’s future Mercedes CLA rival will reportedly stick to the company’s rear-driven platform. With the new 3-Series set to grow larger than ever, offering a compact rear-driven model is important for BMW, especially after the very positive reception of the 2-Series model range. The new Gran Coupe will even get a proper M version as well, featuring the same engine with the current M2. The suspension will be the same with the 5-Series, meaning double wishbones for the front axles and a five-link setup for the rear.  The interior will be significantly upgraded in terms of quality and technology, featuring fewer buttons and the latest infotainment system. The range will include two plug-in hybrid models initially while BMW is also going to offer a full electric version of the 3-Series in 2020 with around 310 miles of range (500km). A Touring model as well as a high performance M3 sedan with over 450 horses from a new 3.0-liter twin-turbo six will join the range too. The Bavarian luxury flagship sedan is getting a facelift, with BMW bringing it in line with the new design features that debuted with the 8-Series. Slimmer headlights and a bigger, more pronounced kidney grille are the key design changes and a setup we’re also going to see in the production X7. The release of the 8-Series coupe was just the beginning as BMW plans to add two more body-styles within the next year or so, a two-door convertible and a four-door Gran Coupe derivative. All three will eventually be offered in M8 guise, getting a “more highly stressed version” of the M5’s powertrain, which already produces 600hp and enables the super-sedan to hit 62mph from a standstill in just 3.4 seconds.