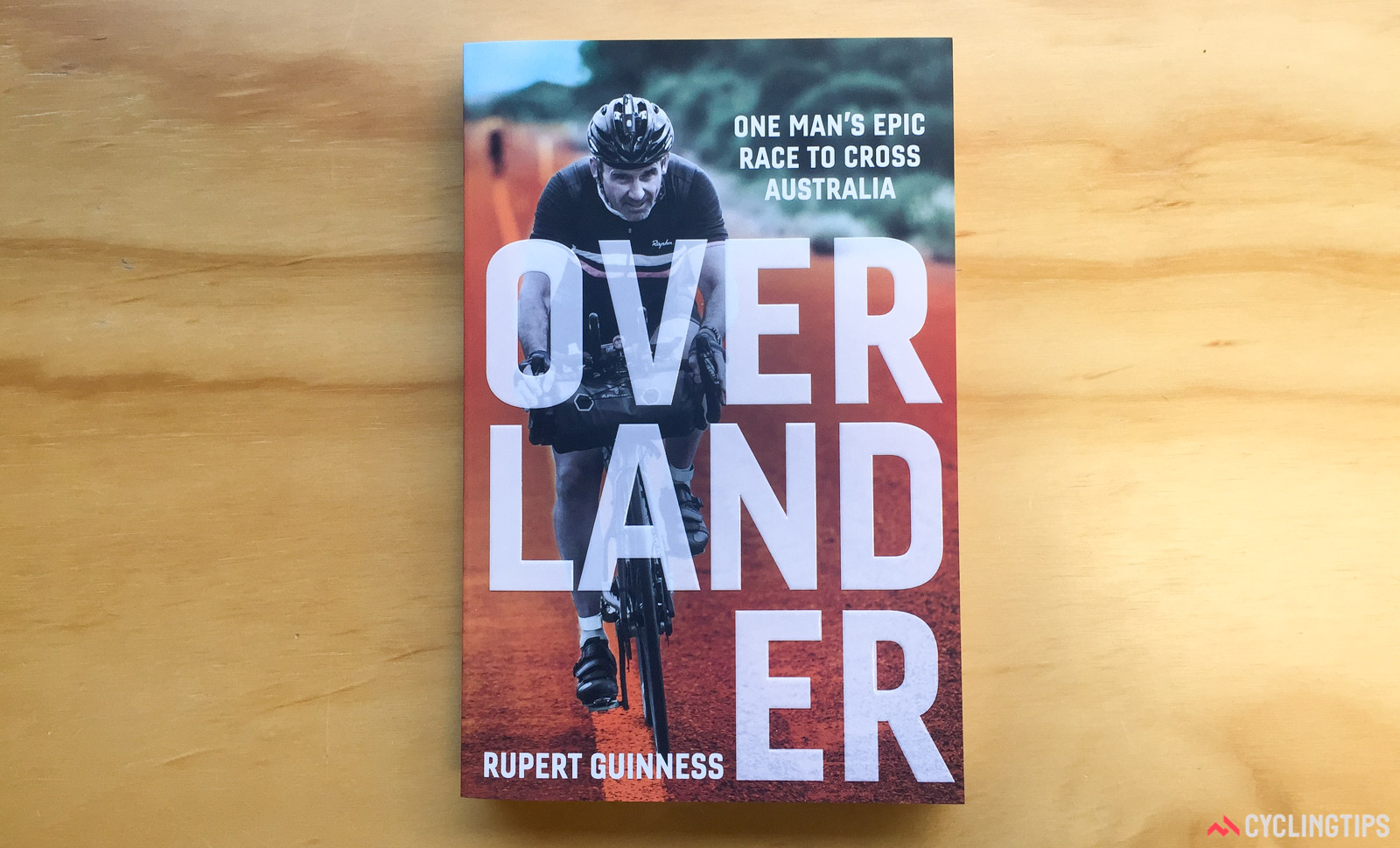 Cycling fans around the world (and particularly in Australia) will be familiar with Rupert Guinness, a veteran sports journalist who’s as famous for his Hawaiian shirts as he is for covering 30(!) Tours de France. If you listened to the CyclingTips podcast during this year’s Tour de France, you would have heard plenty of great stories and insight from Rupert.

Beyond his reporting, Rupe’s also an athlete in his own right — he’s a former elite rower, an Ironman triathlete and, in the past couple years, an ultraendurance cyclist. He’s ridden in both the first two editions of the Indian Pacific Wheel Race, and it’s those rides that are the subject of his latest book, ‘Overlander: One Man’s Epic Race to Cross Australia’. The following review of ‘Overlander’ was written by Craig Fry.

When the latest offering from Rupert Guinness arrived on my doorstep recently, I did my usual thing with new books – flicked through the pages, checked out the images, and read some random passages … just to get a feel for it.

Suffice to say, the emotion coming off those initial few thumbed pages was palpable. ‘Overlander’ grabbed me immediately, and I promptly finished it in three sittings.

Guinness, known to many as a leading Australian cycling journalist and author, set out from Fremantle with 69 other cyclists at 6:00am on March 18, 2017 in the inaugural Indian Pacific Wheel Race. They were all bound for Sydney, on a 5,470km route across some of Australia’s hardest and most spectacular terrain.

‘Overlander’ is Guinness’s personal account of the 2017 ‘Indy Pac’, an event that would end in tragic circumstances on the outskirts of Canberra for one race entrant: Mike Hall, the widely admired English ultra-endurance cycling figurehead.

Guinness writes about the Mike Hall accident respectfully, describing the impact for himself that day, immediately afterwards, and beyond. The tragedy is inescapable in a book set within the 2017 Indy Pac. But one of the good things Guinness does with ‘Overlander’ is show us the wider positive stories that also unfolded in this cycling event. While there is certainly sadness and loss in this book, it presents the reader with much more.

For the most part, ‘Overlander’ is structured chronologically, with Guinness taking us through each of his days riding towards Sydney from Fremantle in March 2017. It’s skillfully done, as you might expect from someone who has written about cycling for more than 30 years.

So effective is the prose that, at times, it feels like you’re rolling along the road beside the author. On more than one occasion, as the inevitable trouble arrived for Guinness in the story, I wanted to yell out to him: “Don’t worry Rupe! The 25mm tubes are OK in 28mm tyres!” “Not another puncture! Come on man, what the hell are you doing!?” “Keep rolling Rupe … you can do it!”

Also present in this story are the original Overlander cyclists of yesteryear. The author’s own daily adventures are interspersed with little snippets about Arthur Richardson, Frank and Alec White, Donald Mackay, Percy Armstrong, Francis Birtles, Eddie Reichenbach, and Hubert Opperman amongst others.

Guinness’s respect for these early Australian cycling pioneers is obvious. He reminds the reader often of the hardships those riders faced more than a century ago in their first cycling feats from coast-to-coast and around Australia.

But ‘Overlander’ is far from a sentimental view of ultra-endurance cycling. Guinness gives us a warts and all picture of the single mindedness (or is it selfishness?) needed to commit to, prepare for, and execute a cross-continent bike ride like the Indy Pac – and the paradox of how necessary it is to have the full support of one’s partner and/or family to do it.

Guinness is also unflinchingly honest in this book about very personal matters, like his long battle with bulimia, his self-doubt and obsessiveness, and his guilt about the worry that his ride caused for partner Libby. He describes too the surprise accidental death of friend Rod Allen in 2013 – on the same date, as fate would have it, that Mike Hall died while racing the 2017 Indy Pac.

The author’s accounts of such things are perhaps not what you’d expect in a book ostensibly about endurance cycling. But they are indeed key parts of the ‘Overlander’ narrative, and their effect leaves you with no doubt about the truth of what Guinness is describing and the personal significance of his ride from Fremantle to Sydney. It is powerful writing.

First and foremost, ‘Overlander’ is a personal story about one man’s attempts to ride across Australia, the high and low moments along the way, and the wider impacts upon Guinness (and those closest to him). It is just one story about the Indy Pac race and the events surrounding it, not the story.

I’d highly recommend ‘Overlander’ if you want an inside view of the Indy Pac and ultra-endurance cycling (it even includes a complete list of gear taken on the road by Guinness). There is also enough in this excellent book to capture the imagination of cyclists of all types, and indeed non-cyclists who enjoy reading about the human costs and rewards of grand scale endurance feats.

Unlike most of Guinness’s previous cycling books about the achievements of elite riders, ‘Overlander’ shows us how ordinary everyday people can also accomplish amazing things on two wheels with motivation, preparation, a bit of self-belief, and a lot of support from others. The author has a warm and gentle way with words, even when writing about the toughest of moments and the most terrible tragedies.

In that way, this latest book from Rupert Guinness is about so much more than a long bike ride across Australia. It is, to paraphrase his own words, a story about accepting your human weaknesses and flaws, and living life while you can.

‘Overlander’ is available in print (AU$35) via Simon & Schuster Australia or as an eBook.

Craig Fry is a freelance cycling writer based in Melbourne. His writing has appeared in CyclingTips, Cyclist Aus/NZ magazine, SBS Cycling Central, Cycling Weekly, The Conversation, and The Age.