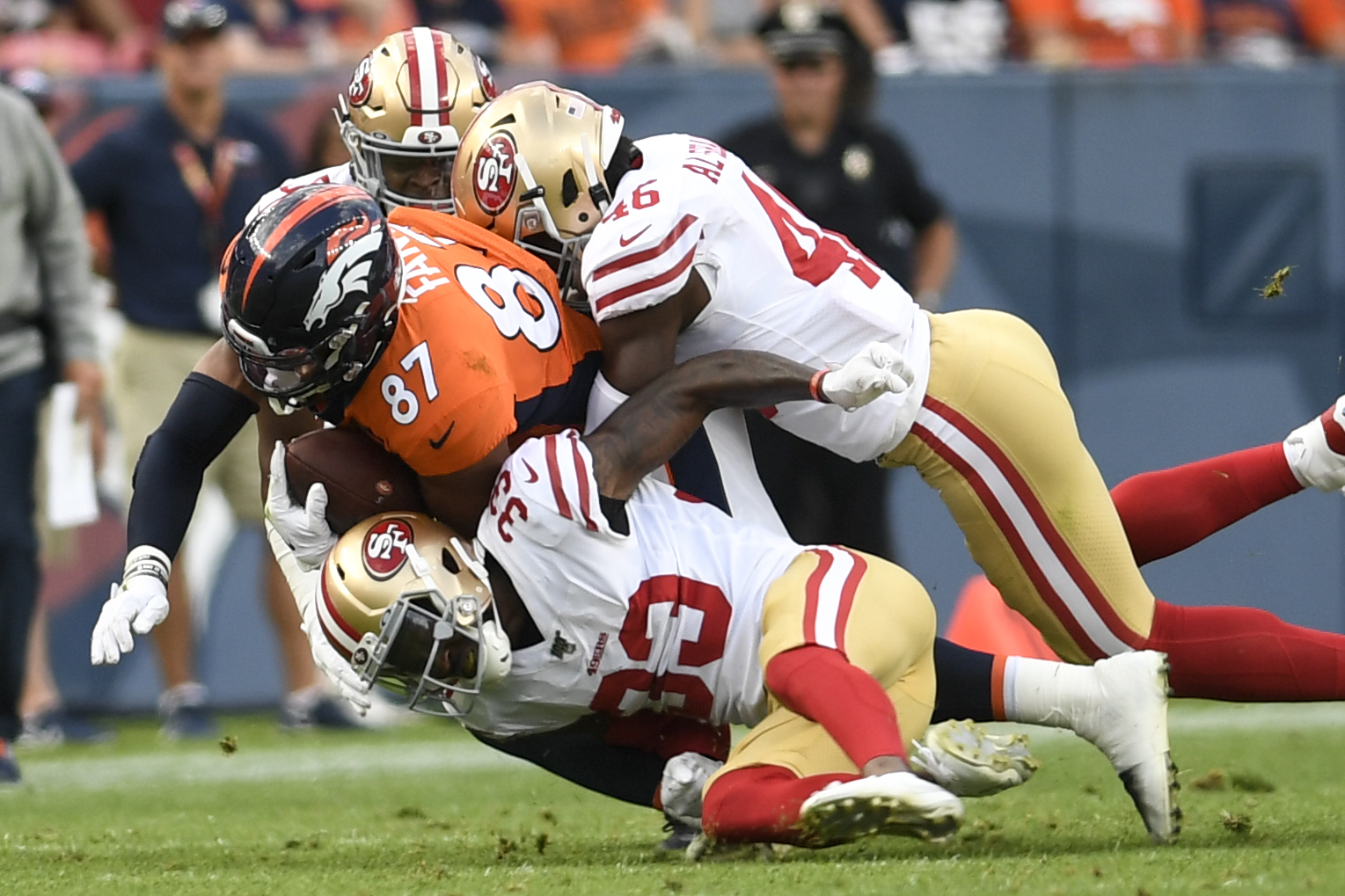 Fant was injured during an 11-yard catch on third-and-24 when he cut back toward the middle of the field for extra yardage and was hit low by safety Jaquiski Tartt.

Fant hobbled to the bench area, where he was examined for several minutes by the Broncos’ training staff.

Fant did not leave the bench area, but did not return to the game.

The Broncos faced San Francisco without tight ends Jeff Heuerman (who injured his shoulder two weeks ago but had returned to practice) and Jake Butt (who has not played in the preseason because of knee soreness).

McManus talks CBA. Broncos kicker Brandon McManus serves as the team’s NFLPA representative. Last week, the union sent players a “lockout guide,” with suggestions on how to prepare for a work stoppage after the 2020 season.

After practice on Saturday, McManus hit on a few labor-related topics:

*On expecting a work stoppage: “I don’t think we’re anticipating it at this time. There are still two full seasons (until the CBA expires). I know that initially in the beginning the talks were positive. I don’t think they’ve gone as well since then. So what the (Players Association) has done is they don’t want anything to happen like it did the last time (in 2011) they had a lockout with guys taking out ridiculous loans with these huge interest rates. We’re just trying to educate a lot of guys this time around who obviously didn’t factor in the last lockout.”

*On how a veteran like McManus is preparing: “I do splurge with a little spending, but I don’t do ridiculous, outrageous stuff. But a lot of the guys, we’re telling them to, if possible, refinance their loans and then to put aside a lot of the performance bonuses and things like that (in) the next two seasons. That way, you can constantly act like you’re receiving a check throughout the offseason.”

*On what the top issue is in McManus’ view: “The owners want the (18-game) schedule. The players (don’t). … To me and a lot of guys here, I think guaranteed money is a big thing. … I know lifetime health care is a huge thing across the league as well. Obviously, we’re entertainers, but people are risking their bodies (on the field). Something might not pop up now when they’re playing (but in the future) where they could get free health care. And then a lot to do with rookie contracts and the franchise tag. They’re trying to limit how many times you can franchise somebody.”

*On the current rule that teams put future guaranteed money in escrow ahead of time, which could impact spending: “(The players) want to completely remove that for sure. They say that they don’t have money (to spend) because of escrow, which is not true. That’s almost non-negotiable for us.”

*On if the current rookie wage scale works: “I don’t know the exact numbers, but I know that we’re looking to change the rookie payment. We’re trying to, one, make the rookies’ pay higher so they earn more money and then, two, not (have teams) buy out the older guys who want to play for 6-10 years because their minimum (salary) is significantly higher.”

Other players who practiced Saturday but were scratched: Safety Kareem Jackson and cornerback Bryce Callahan, replaced by Trey Marshall and Isaac Yiadom, respectively.

Jones was injured against Atlanta on Aug. 1.

“I’m pain free right now,” he said on Saturday. “I’m just working on my range of motion and letting it heal up before I start working on my strength.”

Asked what the best case for his return is, Jones said “4-6 more weeks.”

Monday’s game was the hottest Broncos home game on record

“John was a tremendous resource,” Lynch said. “He’s a good friend and we’ve got a lot of parallels from where we went to school (Stanford), two-sport players. … Now to call him a friend, I think the little bit of time he had me come in (to visit the Broncos) was very integral in my motivation to do this. I have great respect and admiration for him and everything’s he done.”

Etc. Elway said he and the personnel department were also watching the 49ers players during the joint practices. “That’s one of the advantages of having a team in here, looking at maybe their bubble guys and guys that may not make the team that could help us,” he said. “To see them up close and personal like this is a big help.” … The Broncos will have Tuesday off and then two full practices (Wednesday-Thursday). They play Saturday at the Los Angeles Rams (7 p.m.). The Rams have not played the majority of their starters in the preseason and aren’t expected to. … Scouts/executives from Pittsburgh, Baltimore, Chicago, Tampa Bay, Tennessee, Dallas and Green Bay were credentialed for the game as well as Dallas’ XFL franchise and the CFL’s Edmonton Eskimos. … Receiver River Cracraft was the first punt returner used by the Broncos although the punt was a touchback.