Cold climate, big engines: Why do Scandinavians have such high VO2max scores? 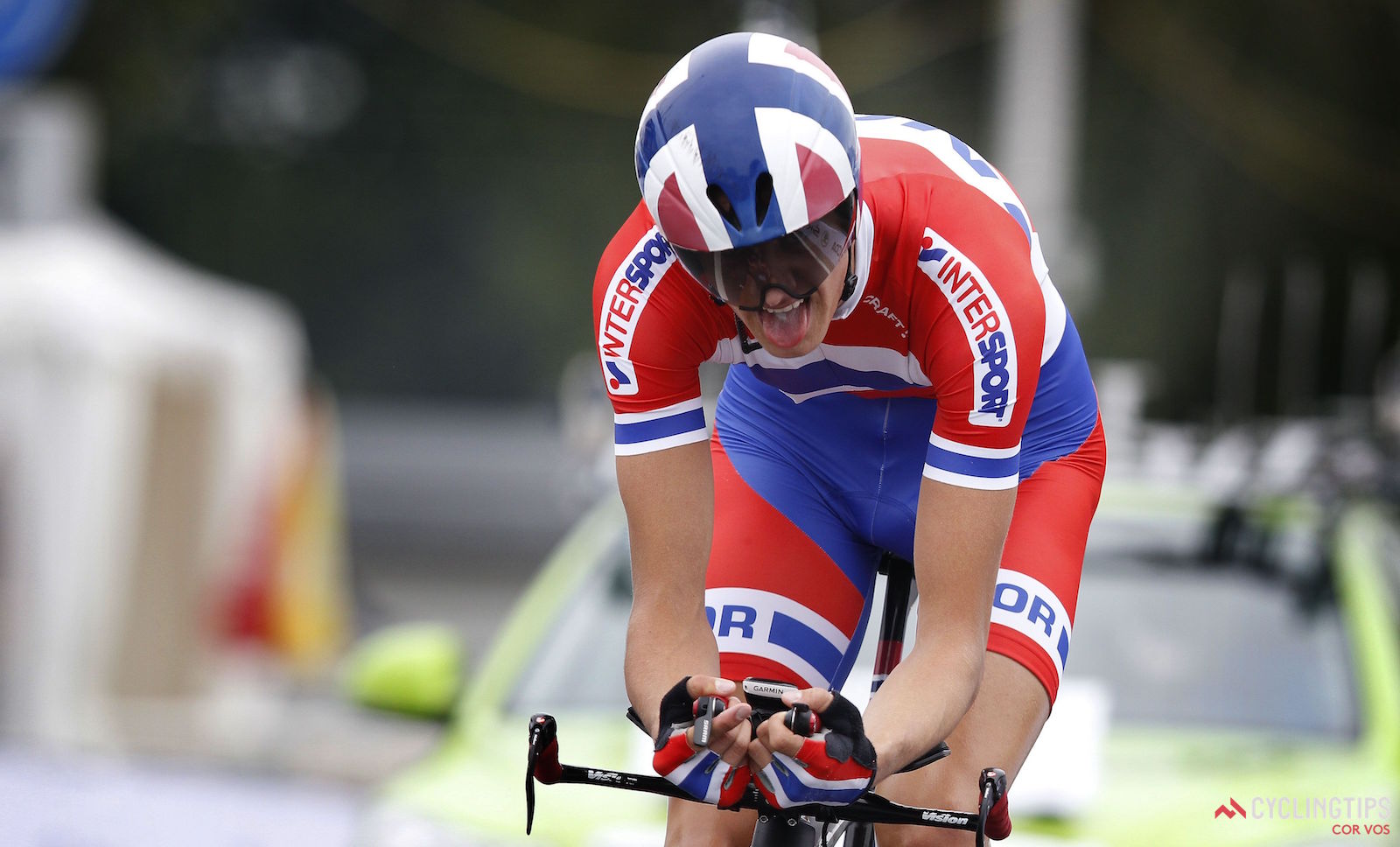 Oskar Svendsen, Espen Harald Bjerke and Bjørn Dæhlie share something besides the fact they’re all Norwegian: they’re the three athletes (one cyclist, two cross country skiers) with the highest recorded VO2max scores of all time. Indeed, if you look at the VO2max records more closely, you’ll also notice that of the top 10 results, seven are from Scandinavia and most of those are from Norway.

So why are Scandinavians, and Norwegians in particular, so gifted in terms of VO2max tests? Have they all inherited a genetic ability that tends towards a high VO2max? Or is it due to the environment they live and train in? Finally, does a high VO2max translate into race success?

VO2max: the size of the engine

First of all, what is VO2max? It’s a number that shows the amount of oxygen (in millilitres) an athlete’s body is able to process every minute for each kilogram of their body weight (ml/min/kg). VO2max is also known as aerobic capacity, the maximal oxygen uptake sustained at maximal effort, the maximum rate of oxygen consumption or, simply, the “size of the engine”. Think of it as a horse-power value that can be used to quantify endurance athletes’ potential.

Oskar Svendsen, as reported on the Norwegian site procycling, tested an incredible 97.5 ml/kg/min during a test performed in Lillehammer by physiologist Joar Hansen in 2012 … when he was just 17 years old. The same week, he went on to win the junior world time trial championships. Everyone was expecting him to be the next Thor Hushovd or Edvald Boasson Hagen (or even better) – after all, when you achieve a higher VO2max than a sacred monster like Bjørn Dæhlie, you’re a very special human being.

However, even after finishing fifth at the Tour de l’Avenir the following year (when Adam Yates finished third), Svendsen started to struggle with injuries, a lack of motivation and the pressure that built up after his VO2max result. The young prodigy eventually retired in 2014 (aged 20) and he has reportedly never regretted that choice. His astronomical VO2max couldn’t keep him in the sport.

Svendsen after winning the junior ITT title at the 2012 Road Worlds. Note the now-WorldTour riders on the podium with him: Matej Mohoric (left) and Max Schachmann, both of whom have now won Grand Tour stages.

If you look at the women’s list of highest VO2max ever recorded, the results are a bit more mixed, with the American runner Joan Benoit scoring the highest value ever recorded for a female in 1984 (78.6). She’s followed by former Norwegian cross country skier Bente Skari (76.6) and Brazilian cyclist Flavia Oliveira (76). But if you scroll down the list, Scandinavians represent the majority of the endurance elite on the women’s side too.

It’s worth pointing out that a high VO2max doesn’t always translate into racing success. VO2max is one of the most important physiological metrics when it comes to separating the good riders from the phenoms, but racing – and especially road racing – is a different beast if you compare it to a lab test, or even to a time trial.

In road races there are other variables at play: team strategy and tactics, mechanical issues, aerodynamics, the ability to ride in groups, the skill to read the course and the race itself, the overall experience of the rider, their psychological resilience and even luck. You need more than a big engine to succeed as a road racer.

So, is the Scandivanians’ success in endurance sport down to genetics? Are these populations only a bunch of ‘endurance freaks’ blessed by a genetic gift? On the one hand, it’s well known and documented that former Finnish cross country skier Eero Mäntyranta (1937-2013) had a genetic mutation to thank for his seven Olympic medals (three gold, two silver, two bronze) and his further five at the World Championships (two gold, two silver, one bronze).

Mäntyranta was affected by Primary Familial and Congenital Polycythemia (PFCP), a disease that causes a high level of hematocrit in the blood (a high volume percentage of red blood cells). The disease was caused by a mutation in the erythropoietin (EPO) receptor gene and it was identified after a study on 200 members of his family. The mutation resulted in a higher production of red blood cell mass and hemoglobin and an increase in the capacity of his body to carry oxygen.

But putting Mäntyranta’s success solely down to his genetics sells him well short — he was famous for his work ethic and because he was training hard as well. And besides, genetics doesn’t seem to provide a population-wide explanation: according to Dr Alun Williams, an exercise geneticist at Manchester Metropolitan University in the UK, it’s very hard to find “any evidence that that kind of genetic advantage is more common in Scandinavia than other parts of the world.”

Sidebar: Punching above their weight

Generally speaking, Norwegians and Scandinavians have been looked upon as outdoorsy, healthy and athletically fit populations. Even the Norwegian language gives clues of this nature, with idioms and expressions like: “født med ski på beina” (“born with skis on the feet”), “ut på tur, aldri sur” (“out and about, never sour”) and “ingen dårlig vær, bare dårlig klær” (“no bad weather, just inappropriate clothing”).

So, it’s no wonder Norwegians have always excelled internationally in several sport disciplines, particularly winter sports. At the 2018 Winter Olympics Norway won the medal count with 39 medals: 14 golds, 14 silver and 11 bronze. That’s a striking result if you take a look at the number of medals per capita.

Stephen Seiler is a senior research consultant for the Norwegian Olympic Federation and Past Dean in the Faculty of Health and Sport Sciences at University of Agder, Kristiansand, Norway. He has a different explanation for the reason behind Norwegian success in VO2max tests and their athletic success more generally: “That has historically probably been a function of an active lifestyle and low obesity levels,” he says. “But that difference seems to be narrowing.”

Seiler is famous for several studies on endurance sports. After a PhD at the University of Texas, he moved to Norway more than 20 years ago and now sits on the executive board of the European University College for Sport Science. When it comes to the VO2max records list, he has more than one concern.

“Scandinavian sport scientists have loved to measure maximal oxygen consumption for 60 years, so there’s a test data availability bias,” he says. “I know there are lots of world elite distance runners with 80-85 VO2 max (or higher), but relatively few are ever tested.”

Secondly, he adds, almost all of the Scandinavian measurements are cherry-picked at best. “Some are just wrong”, he says. “I have seen the Norwegian database and some of the values listed were ‘one-offs’ that were only produced once despite 10+ test occasions. In the case of the 96 by Bjørn Dæhlie, it seems they knew the test was off, but let the media get wind of it to scare the competition.

“I looked carefully at that test and it just did not align with other results (his lactate profile, for example). But, he was for sure an athlete who cracked 90 ml/min/kg.”

Having said that, even Seiler agrees that there seem to be a lot of Scandinavian athletes that surpass 80 ml/min/kg, and a lot with some impressive litre/min values (6.5+). So why is that?

“It’s no surprise that several of the athletes are cross-country skiers”, explains Dr Alun Williams, the exercise geneticist at Manchester Metropolitan University. “Observed VO2max values depend on the mode of exercise. Exercise involving more muscle mass tends to give higher values, so usually cross-country skiing (using upper and lower body) gives higher values than running, that gives higher values than cycling (because the muscle mass recruited is lowest in the latter).”

And given the popularity of cross-country skiing in Scandinavia, both at a recreational and competitive level, it’s little surprise that higher VO2max values are recorded in these countries.

Finally, Scandinavia has a long history of excellent human exercise physiology research (exemplified by the Stockholm’s Karolinksa Institutet and the often quoted “Textbook of Work Physiology” by Astrand and Rodahl) combined with high-end testing facilities available to local athletes, plus a tendency to be open with the results. Even then, the devil is in the details: lab tests for VO2max have a measurement error of around 2% (even in well-maintained labs). Therefore, the highest values must be reconsidered slightly.

***Is magic actually happening in Norway in terms of aerobic capacity? It probably is, but probably due to a combination of different factors. Nonetheless, however you look at it, it’s clear the Scandinavians can claim some pretty big engines.

Nicola “Nick” Busca is a freelance journalist based in London, focusing on sports (particularly cycling, triathlons and skiing), travel and foreign affairs. His stories have appeared in The Guardian, BBC Travel and BBC Capital, among other publications. Previously a staff tech writer for the Cycling Weekly, he wrote for the online and the print version of the magazine as well as for their sister monthly magazine Cycling Active before it was shut.

As a freelancer, he has also contributed to Bike Radar, UK triathlon magazine 220 Triathlon, Australia’s Triathlon and Multi Sport Magazine, and Italy’s Triathlete.

The post Cold climate, big engines: Why do Scandinavians have such high VO2max scores? appeared first on CyclingTips.