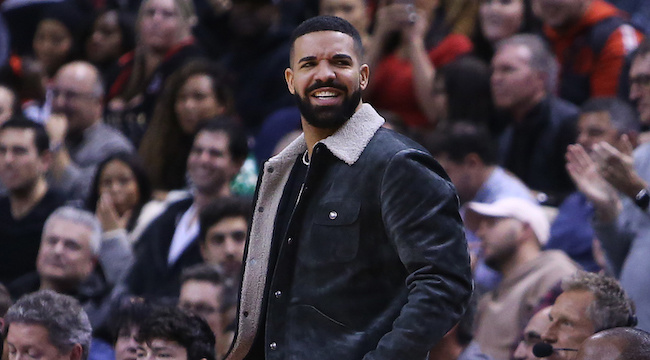 Drake loves his sports, but unfortunately for him, sports don’t always love him back. The Canadian star is a fixture of many NBA arenas’ court-side seats and is often photographed with prominent athletes and a huge smile, but some fans have determined that the Drake co-sign, which is a Midas touch in the music industry, often has the opposite effect for athletes and teams he supports. The latest recipient of the Drake co-sign is Alabama’s Crimson Tide football team, currently prepping to take on the Clemson Tigers in the upcoming CFP Championship game Monday, January 7, and like clockwork, the jokes are already rolling in about the dreaded “Drake Curse.”

Get your mind right! Motivation from – @Drake repping Bama!#OutworkYesterday#RollTide pic.twitter.com/Pv0nK6JEjt

Drake’s support is no coincidence. Often accused of being a “bandwagon fan” of great teams, he’s throwing his rooting interest behind a team that has been undefeated this season, which echoes his prior support of teams and athletes like the NBA’s Golden State Warriors, who went 73-9 to become the winningest regular season team in NBA history before becoming the first to blow a 3-1 lead in the Finals, or Conor McGregor, the UFC fighter whose recent loss to Khabib Nurmagomedov resulted in a derisive tweet from his rap rival Pusha T. Of course, as with any meme, the “Drake Curse” is mostly fluff with a little truth added in to make it believable at first glance, but that hasn’t stopped college football fans from going all-in on the memes, jokes, and commentary that come standard with any high-profile matchup that also includes an appearance from one of the biggest pop stars on the planet. Check out more below.

This was the only possible way Alabama could’ve lost. The Drake curse has sealed the deal. Come back to this tweet after the game. https://t.co/md9SprWOiw

They about to lose now

Drake is a damn curse https://t.co/cnU3sjnub1

The CURSE OF DRAKE… pic.twitter.com/Q46EEGI1eN

Bama is going to lose now

Bruh, @Drake is biggest #stan of 2019.. and we 2 days in… @AlabamaFTBL don't wanna heae about the drake curse if clemson wins pic.twitter.com/X9TKhtsooH

Most gracious Heavenly Father, please let the Drake curse strike down Bama with biblical proportions like the plagues of ancient Egypt. In Jesus name, Amen. https://t.co/jVTPTDcRDS

I swear if we lose cause of the drake curse I’m never listening to another one of his songs… https://t.co/Aa91Mg7bLK

The Drake curse in full effect. Congrats on your national championship Clemson https://t.co/oBWW6bhJ6Q

He in the BAMA hoodie. Y'all kno what that mean…. #DrakeCurse https://t.co/AzQ1plANxK

Well, we’re gonna lose, for sure. The Drake curse is real! #RollTide

Alabama losing this championship – y’all can RT this when it happens. Drake curse is real. https://t.co/nvikPCrcLV