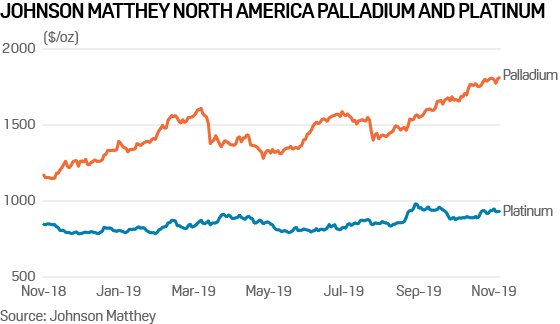 What’s happening? Palladium, the darling of the precious metals world for the past 18 months, continues to power forward, leaving sister metal platinum in its wake. Both are used in auto catalyst technology to lower emissions. Platinum has suffered from the downturn in diesel vehicle sales, and the stigma following the “diesel-gate” scandal that surfaced in 2015. Conversely palladium, used in petrol engines, has seen demand accelerate on tightening emissions legislation. The metal has also been given a boost by tight demand, with some forecasting a one million oz deficit in 2020.

What’s next? Many market participants see $2,000/oz as attainable in the short term for palladium. Any indications that some kind of resolution to the trade spat between the US/China could be achieved would likely deliver an additional boost, by kick-starting auto demand. Talk is rife of possible substitution of cheaper palladium for platinum. However, there is no evidence of this so far, and any switch could take two or three years, according to sources. Platinum has recovered somewhat from the 2019 lows of around $775/oz, to trade around $900-950/oz, but investment has not moved from one metal to another despite the still-wide differential.

2. First chills of winter in US boost Henry Hub prices

What’s happening? A blast of early winter weather this week is lifting benchmark US gas futures prices to their highest since late February. On November 4, the NYMEX prompt-month contract changed hands at over $2.90/MMBtu during intraday trade, having gained over 60 cents or about 25% since late October. The market bullishness prompted by Mother Nature marks a sharp departure from this summer when US gas prices traded in the low-$2s/MMBtu, or their weakest since mid-2016.

What’s next? Higher prompt-month futures prices have accompanied the strongest start to the US heating season in over five years, S&P Global Platts Analytics data shows. Elevated residential-commercial gas demand could prompt an early start to the storage withdrawal season, making for more bullishness along the forward curve. For January, calendar-month forwards prices are now trading in the $2.90s/MMBtu and could see more upward momentum as heating demand continues to outperform through mid-November.

What’s happening? OPEC production cuts and crude price volatility are taking a toll on Middle East economies, the International Monetary Fund recently said, revising down its GDP growth forecasts several countries in the region that rely heavily on oil revenues. Saudi Arabia, for example, will grow an anemic 0.7% in 2019, down from the IMF’s previous forecast of 2.1%. The IMF expects Middle East countries’ breakeven oil prices to remain high in 2019 and 2020 compared to current oil prices, with Brent hovering around $60/b. Saudi Arabia, the world’s biggest oil exporter, needs a breakeven price of $86.50/b to balance its budget in 2019 and $83.60/b in 2020. Sanctions-hit Iran is in even direr straits, with prices above $150/b needed.

What’s next? Complicating the situation for these countries, which represent OPEC’s core membership, breakeven prices for Russia and the US are much lower. Russia is a key partner in OPEC’s production cut accord, but its greater ability to withstand lower oil prices could reduce its motivation to prolong co-operation on the cuts, which are currently scheduled to expire in March 2020. The coalition will meet December 5-6 in Vienna to decide whether to extend or even deepen the supply curbs. US producers, meanwhile, continue to become more efficient, intensifying market share competition for OPEC and capping any upside in prices from the coalition’s cuts.

What’s happening? A rally in the price of December natural gas has turned German gas-fired power generation margins negative for the front month. Clean spark spreads (the power price minus gas and carbon costs) for a 50% efficient plant have fallen five euros to minus Eur1.14/MWh in the first week of November. A similar if less severe decline has taken German coal-fired generation spreads, down to Eur5.44/MWh.

What’s next? The door is swinging open for more coal-fired generation in December. Margins for 45% efficient coal plants are now sufficient to claw back some of the coal-to-gas switching seen over the summer and into October. The bigger picture is that German hard coal generation is taking a back seat to cleaner generation this year, notably wind power which is on course to be the country’s premier source of electricity. Meanwhile the German government is preparing a draft law to cut coal capacity to 15 GW by 2022, with compensation to be awarded via auctions.

What’s happening? Australia and Malaysia, two big LNG exporters, have increased exports to China significantly in 2019. Australia now accounts for nearly half of China’s LNG imports. There are three points to note here. Firstly, Australia and Malaysia gained market share in China while top LNG exporter Qatar’s exports to China are flat to slightly lower, reflecting stronger European netbacks. Qatar has excess LNG, but with JKM at record lows, the supplier would rather not pressure key long-term markets in Asia. Secondly, Australia and Malaysia offset the decline of US LNG exports to China, and were the key beneficiaries of the US-China trade conflict. Frequent cargo swaps have also helped. Thirdly, China has offset the decline in mature markets like Japan, where buyers renegotiated long-term contracts into smaller volumes over shorter durations. China’s incremental imports were mostly from the spot and short-term market, and Australian and Malaysian LNG have filled the gap directly or through portfolios sellers.

What’s next? Qatar is ramping up export capacity with the expansion of its mega-trains, and US LNG could be back sooner than expected if the trade dispute gets resolved. New Chinese non-state buyers are also coming to market for medium-term contracts. Australia and Malaysian LNG faces stiff competition in a buyers’ market.