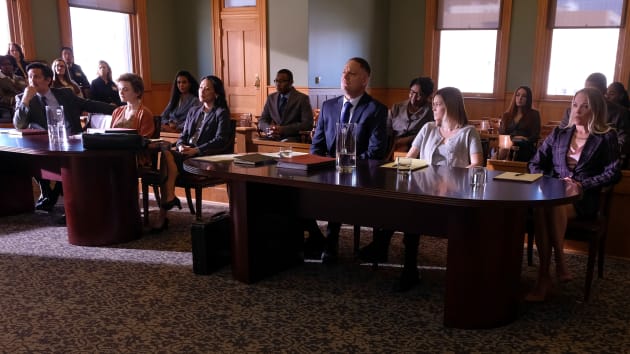 The moment has come! After a year of rumors and accusations, Jeanette Turner and Kate Wallis headed to court on Cruel Summer Season 1 Episode 10.

All the plot threads and clues brought the story to this satisfying climax. It took three years for the truth of Martin’s house to come to light and shake up everything in Skylin.

“Hostile Witness” delivered an exciting end to this sensational mystery.

The trial between Jeanette and Kate started on a dramatic foot with the revelations we already knew. Dropping the bomb about the chatroom conversation was the smoking gun that unraveled the rest of the mystery.

If the trial had kept going, Kate would’ve lost.

Kate’s reliability as a witness was ruined since she had just been caught in a lie about her story. And even if Mallory provided the snow globe to show Jeanette was at Martin’s house more times, the Jamie voicemail would’ve proven that Kate had access to a phone.

Jeanette: I gave Mallory the snow globe. She wouldn’t give it back, probably to protect you. If you search her room, you’ll probably find it.Kate: You’re not lying[Jeanette shakes her head]Kate: It was really Mallory who saw me.Jeanette: I didn’t see you.

Permalink: I didn’t see you.

It’s a shame we didn’t get more of the trial on Cruel Summer Season 1. It would’ve been nice to have more elements of the story play into the case and how their testimonies affected things.

Case in point, Kate’s being exposed changed how the rest of “Hostile Witness” went.

Kate’s confrontation with Jeanette was a long time coming. Seriously, this meeting should’ve happened a year earlier between them.

Had they just stayed in a room to talk things out, they would’ve put the pieces together to clear things up. Instead, the reveal on the talk show sparked all the chaos to get to this point.

Their meeting was surprisingly civil and a tad confusing. What dirty tricks did Jeanette do to Kate for her to be justified? Was she talking about the accusation?

Jeanette was right that Kate destroyed her life, but Kate’s comeback needed some answers since her revenge then seemed imbalanced. There had to be more to the story during their time in 1994/1995.

I liked how open Jeanette and Kate were during their chat in Martin’s house. This was the time they needed to put everything on the table if they had any chance of moving past it.

And for once, they were listening to each other and processing the trauma of what happened.

I’m guilty for loving him. And for hating him. For killing him.

Permalink: I’m guilty for loving him. And for hating him. For killing him.

Neither will ever be friends, but they at least understood where the other was coming from. Kate’s connection to Martin and her time in the house explained how it all came to be. And, Jeanette wanting to be popular explained her motivation for EVERYTHING. (We’ll get to her twist later on.)

The best these two characters needed was to find peace within themselves and each other. They were affected by what Martin did, and continuing to go after each other would’ve only hurt them more in the end.

Annabelle being revealed as a gun was an interesting choice.

It’s a plausible twist as it’s an item that someone could reasonably name. Plus, it cleared up a lot of plotholes and made the thread easier to understand since it wasn’t another kidnapped person.

If Annabelle had been a person, questions would’ve come up about how this person was involved, if Martin had kidnapped her too, and where she was all this time. That extra layer could’ve muddied the waters since not enough time would’ve been spent to explain the backstory.

Keeping it to a weapon tied the story together and filled in many gaps, like the gunshot sound on Cruel Summer Season 1 Episode 1.

The twist about Mallory was both satisfying and shocking. Mostly this comes from a deduction standpoint where I had guessed she was the one involved since the series premiere.

Just like every reveal on Cruel Summer Season 1, the answer fell in the grey zone.

We can’t say Mallory was the villain because she didn’t reasonably see Kate, and when she did deduce it was her, it was long after the fact. Mallory would’ve been persecuted in the same way that the world turned on Jeanette for being at the wrong place at the wrong time.

Mallory: I saw a woman living freely. Not in a basement. I figured it was Martin Harris’ girlfriend, sister or something.Kate: You were half right.Mallory: It didn’t make sense for a missing girl to be in the living room making a call.

Permalink: I saw a woman living freely. Not in a basement.

Though Kate forgiving Mallory so quickly seemed unjust after all the hell they caused throughout the previous year. Granted, Jeanette deserved the karma after the big twist reveal, but before then, Mallory knew Jeanette didn’t see Kate as a captive (on Christmas Eve).

Their friendship year was filled with a big lie and Mallory pushed a story when she knew Kate was half-lying about the Martin experience (and misinformed about Jeanette). This situation was very murky.

“Hostile Witness” ends on a thrilling high-note. When everything seemed resolved, a final reveal threw the entire season on its head.

Were your theories right about Jeanette knowing Kate was in the basement all along?

The timeframe revealed it was sometime in 1994 when Jeanette had straight hair, so she could’ve been in popular mode by then. Since Skylin is in Texas, the weather/choice of clothing didn’t indicate when Jeanette heard Kate.

This twist proved that Jeanette was the monster all this time. Her lies were so convincing; she sold that story and played being the victim, even when she knew deep down the truth.

Mallory was right in a way. Jeanette’s desperation to be popular was unhealthy and toxic.

What makes this twist so interesting was that the story from Cruel Summer Season 1 followed a mystery to answer a question that cleared Jeanette.

Though, the underlining accusation of if Jeanette knew Kate was at Martin’s proved she was guilty all along. We as the viewers (and the characters) were going down the wrong path to get a half-truth. The “case” would’ve never revealed the ultimate twist that Jeanette knew all this time.

There is something I wanna say. To the girl who named me, who could’ve cleared all this up sooner but didn’t. Kate Wallis … I forgive you.

Permalink: Kate Wallis … I forgive you.

I felt chills when she smiled at hearing Kate calling for help in the basement.

Chiara Aurelia did a great job playing Jeanette as the complicated social climber. Jeanette fooled everyone; it’s both shocking and right up her alley. Looking back in hindsight, of course, Jeanette would do anything to stay popular.

Hopefully, Vince and Ben work things out. Ben dropping Vince was a terrible move, but they’re young and can talk things out.

How did the police know to visit Martin? Did someone call to leave a tip? That’s one plothole I wish got resolved.

Jamie apologizing to Ben was a long time coming. He should’ve spoken to his friend right after the accident happened.

Now that Cruel Summer is renewed, I think this should become an anthology series. Let’s close the book on this story and focus on another time-jumping mystery.

Now, over to you, Cruel Summer fans!

What did you think of “Hostile Witness”?

Did the ending live up to your expectations? Did you think Jeanette was going to call out Kate during her interview? What story do you hope happens on Cruel Summer Season 2?

If you missed the latest episode of Cruel Summer, you can watch Cruel Summer online via TV Fanatic. Come back here and share your thoughts in the comments below.