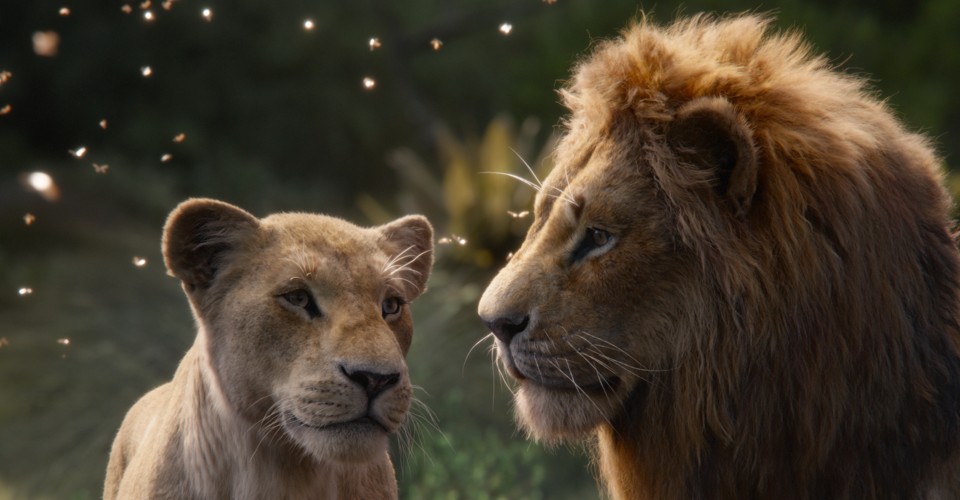 For the millennials who experienced The Lion King as children, Disney’s mega-popular 1994 animated feature likely didn’t require much suspension of disbelief. Sure, there was a Hamlet-esque regicide plotline among some lions. Yes, animals of all stripes communed in relative harmony before that. But the royal intrigue and interspecies relationships were tied together with some undeniably catchy musical sequences, and the vividly rendered animations created a dynamic cinematic universe. All things considered, it made sense.

The forthcoming CGI remake of the film, which will have its wide release next Friday, demands a bit more of the adults who grew up with the tale. The new Lion King is among the first few in the litany of live-action remakes that the entertainment conglomerate has begun debuting. As such, it’s both a stand-alone work and a fascinating example of Disney’s competing business and artistic priorities. The Jon Favreau–directed movie is at once a nostalgia play—Some millennials have kids of their own now!—and an attempt by the company to reach younger audiences.

The new Lion King hews closely to the original’s script; Disney teased the overlaps with a trailer that replicated the early-’90s promotional video shot for shot. But even if millennial audiences were capable of feeling the devastation of Mufasa’s death anew, the 2019 movie presents larger concerns. The remake’s divergences yield uneven results, and ditching the wondrous possibility of animation creates a quandary: Cartoon chameleons resting near animated lions are one thing, but it’s harder to place life-like renderings of these creatures next to each other in a sun-drenched savanna and make the whole scene look natural. The ensuing film is an uncanny production, a sometimes-bizarre mélange of Planet Earth–esque visuals and youthful, animalian dialogue.

The gaps between the original’s ebullience and the comparatively prosaic remake are most obvious in the new film’s early musical scenes. The 1994 “I Just Can’t Wait to Be King,” sung by Jason Weaver (though Young Simba was voiced by Jonathan Taylor Thomas), was a kaleidoscopic sequence that shone in no small part because of the hilarious physical hijinks of the animals surrounding the young lion. Simba and Nala perched atop an ostrich that crowned a tower composed partly of zebras, giraffes, and hippos as the prince belted his anthem. The 2019 edition strips “I Just Can’t Wait to Be King” of its mischievous fun by eliminating (for understandable reasons) the psychedelic elements. So, too, does Scar’s menacing “Be Prepared” lose some of its power when the hyenas’ response is muted by the CGI animals’ limited mobility. “Hakuna Matata” is reduced to the backing sound of Timon, Pumbaa, and Simba simply walking through the jungle. These are unfortunate, if also predictable losses.

For viewers who are old enough to remember the original movie, high-profile cast members such as Beyoncé, Donald Glover, Chiwetel Ejiofor, Billy Eichner, and Seth Rogen may at turns buoy the film’s appeal and distract from the central tale with their identifiable vocal tics. As the adult Simba, Glover easily adopts the role of a sullen adolescent lion. For audiences of the actor’s FX show Atlanta, it’s perhaps a familiar characterization. Glover’s disposition meshes well with the early conflicts that Simba faces; it’s only when his character is met with moments of abject terror—or expected to project kingly authority against his uncle Scar—that Glover’s distinctive affect is distracting. As the adult Nala (voiced in the original by Moira Kelly), Beyoncé is recognizable but more subtle than many might expect. There’s still some Houston in her voice, to be sure, but her tonality only jolts viewers out of the film’s landscape when she’s dramatically adding runs and riffs to her rendition of “Can You Feel the Love Tonight.”

Nala, and other female characters, do get some refreshing new shading in this adaptation, though. Where the 1994 film didn’t explain Nala’s motivation for leaving the pride to seek help after Scar’s takeover, the new production adds scenes in which she expresses a desire to venture out despite warnings from Simba’s mother, Sarabi (voiced by Alfre Woodard). Their weighty discussion, as well as Scar’s futile attempts to make Sarabi his queen and Nala’s difficulty carrying out her escape plan, also help correct the animated movie’s mischaracterization of prides, which are matrilineal groupings where the female lions hold all meaningful power. “Lions, are you with me?” Nala asks at one point during the lionesses’ rebellion. (But given the addition of “Spirit,” a new original track sung by Beyoncé, it’s hard not to halfway expect the line to have been something closer to “Okay lions, now let’s get in formation.”)

Ejiofor seems to take a special joy in his role as Scar, relishing the character’s villainous streak with drawn-out words and theatrical roars. As Timon and Pumbaa, respectively, Eichner and Rogen are delightful. Their banter is witty and light, injecting some of the most fun in the entire film. When they show the young Simba how to eat insects, for example, Timon responds to a note about the crawlers’ freshness with a modern endorsement: “They’re local.” There are some other cute contemporary touches, too. Though he’s not nearly as eccentric as Rowan Atkinson’s Zazu, John Oliver dashes off cheeky remarks as the lions’ loyal avian companion, such as: “The birds are tweeting at 4 in the morning. I’m like, ‘Birds, we get it.’” Oh, the ambient horror!

The update also homes in more clearly on the consequences of the “circle of life,” leaning into some conservationist themes. Insects appear throughout the film with a strangely calming frequency. Timon and Pumbaa push back against Simba’s naive assessment of symbiotic animal life by reminding him that he is, after all, a predator. There’s a welcome tension in these scenes that matches the elevated stakes of depicting life-like animals interacting with one another. The Lion King captures just enough of the original’s warm-hearted excitement—and introduces enough new delights—to feel like more than a cynical Disney money grab. That’s not a terribly high bar to clear.