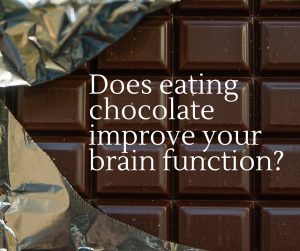 Thanks to Dr Amy Reichelt for this tasty article!  Amy’s research focuses on addictive memories, reward, motivation and behavioural control. She’s particularly interested in how diet impacts on behaviour and the formation of memories, and how our environments change how we react and learn about certain events. Read more of her work in The Conversation.

Everyone loves a study that turns one of our favourite vices into a health benefit. Recently, the news headlines tell us “eating chocolate improves brain function” and that it “could help protect against normal age-related decline”.

The study, published in May 2016 in the peer-reviewed journal, Appetite, found that memory and abstract thinking improved in those reporting more chocolate consumption. These effects were reported not to be influenced by factors such as age, weight and general health measures.

Before you reach for a Mars bar or a Dairy Milk, let’s take a step back.

This is a correlational study. That means it shows an association between people who reported regularly eating chocolate and better scores on brain function tests. It doesn’t show that chocolate consumption directly improves brain function.

Other factors are also at play. The people who consumed more chocolate also had better diets and drank less alcohol. And both groups relied on their memory to report their chocolate consumption levels.

Sorry folks, but you won’t be able to rely on this study to justify your 3pm chocolate binge. How was the study conducted?

The 968 participants were from the Maine-Syracuse Longitudinal Study, which has followed the same group of New Yorkers for more than 35 years. The participants undertake questionnaires and physical examinations at various intervals so researchers can determine changes associated with ageing, the development of heart disease and also cognitive performance.

In 2006, the participants reported how often during the week they ate a variety of foods, including chocolate, meat, eggs, breads, rice, fruit, vegetables, dairy, nuts and beverages such as tea, coffee, water, fruit juice and alcohol. Chocolate was not differentiated according to whether it was dark, milk or white chocolate. The participants reported their food intake retrospectively via a questionnaire.
racorn/Shutterstock

Participants were given various brain function tests – including remembering where things were (spatial memory), abstract reasoning, working memory and attention. The relationships between chocolate intake and performance on the cognitive tasks were then analysed.

What were the results?

The participants reporting that they ate chocolate more than once a week performed better in most of the cognitive tests, particularly on their “visual-spatial memory and organisation” score. There was no relationship with working memory.

More women were self-reported chocolate eaters, so this could bias the results. Women often perform better than men in certain tests of cognitive function, particularly in the elderly.

The chocolate-eating group was less likely to have high blood pressure or diabetes and had lower fasting blood glucose levels (indicative of pre-diabetes) than non-chocolate-eating participants.

However, chocolate eaters had higher cholesterol, including low-density lipoprotein (bad) cholesterol, which is associated with poorer cardiovascular health.

So what does it all mean?

Chocolate is often demonised due to the high sugar and fat content in chocolate bars and its association with “guilty pleasure”. But cocoa (or chocolate in its raw form) actually contains lots of compounds that act in the brain.

In particular, cocoa contains flavanoids, which are found in fruits such as grapes and apples. Cocoa also contains caffeine and theobromine, which are the stimulants found in coffee and tea. These natural compounds are thought to improve alertness and so can improve brain function. But the amounts of these chemicals depend on the cocoa concentration of chocolate – and milk chocolate contains much less of these active ingredients than dark chocolate. The study points out that the type of chocolate consumed wasn’t assessed, so we don’t know whether this had an impact on the results.

It’s important to remember that this is a correlational study. So it doesn’t examine whether chocolate consumption directly improves brain function. To test this, an experiment would ask people to eat a chocolate-rich diet or a no-chocolate diet for a reasonable amount of time, and then carry out the brain function tests. This would be a way of establishing whether chocolate can enhance cognitive performance.

What else do we need to take into account?

The participants who consumed chocolate also reported eating more serves of vegetables, meats and dairy foods, and more food overall, as well as drinking less alcohol. This indicates they may have had better diets overall, regardless of their reports of eating more chocolate.

Alcohol intake is known to diminish brain function, so could have impacted on the non-chocolate-eating group. The authors followed up this observation by examining alcohol intake separately and found no association between alcohol intake and the tests of brain function. This suggests that alcohol didn’t have an impact on brain functions measured. However, it could indicate differences in general health and well-being.

More people in the non-chocolate-eating group had diabetes, so they may have been avoiding chocolate because of the high sugar content. Diabetes has been linked with cognitive impairments, particularly in memory performance, so this could affect the results. Light, dark, whole blocks or single squares: not all chocolate is equal.
Pauline Mak/Shutterstock, CC BY

Another issue is that the participants were retrospectively self-reporting their food intake in response to a questionnaire. People can easily misreport or underestimate their consumption.

(In fact, the lower scores on the brain function tests by people who consumed less chocolate could reflect a group that was less able to accurately report their food consumption. Asking someone to recall their food for the week is a test of memory in itself!)

Portion sizes weren’t reported either, only the frequency of foods eaten over days. So the research didn’t differentiate between whether you eat a family-sized bar of chocolate, or just a single square.

This type of cross-sectional study is great for showing the relationship between diet and health at a snapshot in time. But correlation does not equal causation. To really get to the bottom of this issue, we need carefully designed experimental studies to examine the association between chocolate and cognitive health, and the mechanisms linking them. – Amy Reichelt

This review of the article is a sound interpretation of the results.

The important point is that although the participants were in a longitudinal study that recruited people in waves between 1975 and 2000, the measurement of dietary intake and the cognitive function testing was only done on a sub-group who came in for testing during the sixth wave of follow-up, between 2001 and 2006. So the main analysis could only look at cross-sectional associations.

The participants were divided into three groups based on usual chocolate consumption: never, once a week, or more than once a week. But it’s not clear whether usual intake was over the past year, or just for the past week, which could affect the results.

The review clearly highlights some other potential explanations for the findings, including that those who ate chocolate also reported some healthier eating patterns. It’s very likely that those with diabetes would have been advised to eat less chocolate.

The observation of a lower proportion of chocolate eaters having high blood pressure is consistent with a systematic review showing that regular chocolate consumption can have a small blood-pressure-lowering effect.

However, as much as we would all love the results of the cross-sectional analysis to be true, a 2013 systematic review found that in trials lasting between five days to six weeks, chocolate did not improve cognitive function.

I agree with the conclusion that better quality trials, including mechanistic studies, are needed. – Clare Collins

This tasty piece was writing by Dr Amy Reichelt, Senior Research Fellow, UNSW Australia. And was originally published on The Conversation. Read the original article.

Check out Dr Amy Reichelt’s research blog ‘BrainStemmed‘. Dr Reichelt has a major research focus on the impact of diet and exercise on the formation of memories, and the addictive nature of junk food. And she’s particularly interested in how we can change our existing memories – which could help those affected by post-traumatic stress disorder, phobias and addiction.

The post Does eating chocolate improve your brain function? appeared first on Your Brain Health.