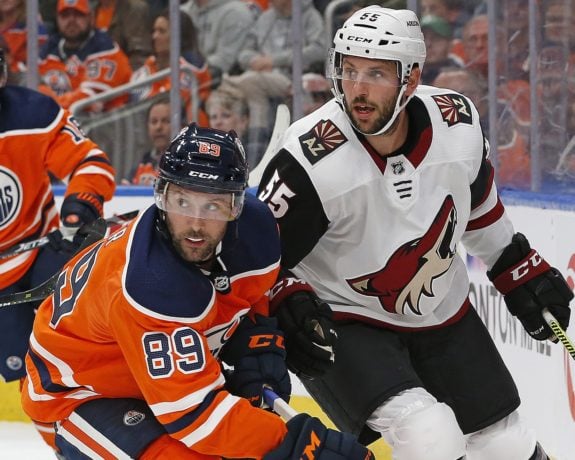 Sam Gagner arrived with the Edmonton Oilers in 2007-08 as a talented prospect. Following an outstanding 118-point output with the Ontario Hockey League’s London Knights, and earning most valuable player honours for Team Canada at the 2007 Summit Series, he was viewed as a future offensive star in Edmonton. 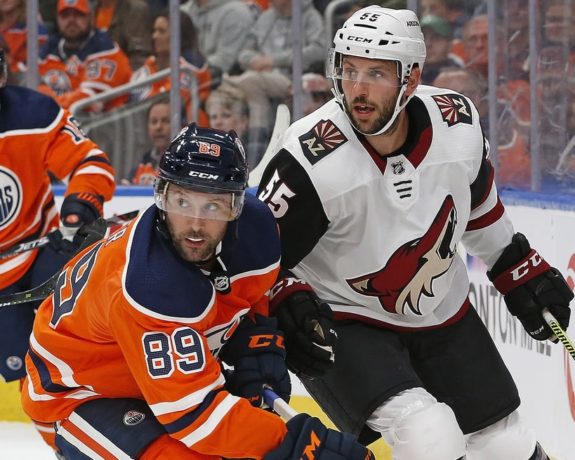 While he never became an elite player at the NHL level, Gagner has been reasonably productive in parts of nine seasons with the Oilers. He has 107 goals, 202 assists and 309 points in 516 career games as a member of the Oilers. He can still chip in offensively, but has carved out a new role with team, as he aims to stay in the NHL.

Edmonton does feel like home to me. There’s just something about the city and the people and the passion they have for hockey that I love. And coming back here just reinforces that. At the time I was traded, it was probably good for me to go out and see some other things, and I feel like I’m better for it. I’m excited about the challenge of continuing to push forward and hopefully call this home for the rest of my career.

Selected sixth-overall in the 2007 NHL Entry Draft, Gagner surprisingly made the Oilers out of training camp as an 18-year-old. After trading away Ryan Smyth – the longtime face of the franchise – in Feb. 2007, a new era of Oilers hockey was ushered in with Gagner, Andrew Cogliano and Robert Nilsson at the forefront.

He enjoyed his best offensive season with the Oilers as a rookie in 2007-08, putting up 13 goals and 49 points in 79 games. Despite a strong push down the stretch run, the Oilers fell three points short of the eighth and final playoff spot in the Western Conference. Unfortunately, that remains the closest Gagner has ever come to making the playoffs in Edmonton.

Over the following two seasons, he was elevated to the first line with Ales Hemsky and Dustin Penner. Although his average ice time went up and his quality of linemates was upgraded, Gagner’s point totals slightly dipped. By his third NHL season, it was clear the Oilers had no hope of making the playoffs and needed to commit to a full rebuild.

With the arrival of young guns like Taylor Hall, Jordan Eberle and Ryan Nugent-Hopkins around the beginning of the 2010s, Gagner made the transition from a first line player to a secondary scoring option. While it became evident he would likely never live up to his draft status, he settled in as a consistent 40-point player.

In 2011-12, he had the most memorable game of his NHL career when he scored four goals and eight points on Feb. 2 in an 8-4 win over the Chicago Blackhawks. Gagner tied Wayne Gretzky and Paul Coffey’s shared franchise record for most points in a game. He also became just the 13th player in NHL history to score eight or more points in a game, and the first since Mario Lemieux on Dec. 31, 1988.

Following the NHL lockout, Gagner was Edmonton’s best player in the first-half of the 2012-13 season. He began the season on a 10-game point streak and finished with 38 points in 48 games, which prorated to 65 points in 82 games. However, he suffered a broken jaw in an exhibition game in 2013-14, and was unable to build off his solid performance the previous season. After seven seasons with the organization, he was traded to the Tampa Bay Lightning in 2014.

The Oilers reacquired him from the Vancouver Canucks on Feb. 16, and he gave the team some offensive punch with five goals and 10 points in 25 games in 2018-19. Coming into this season, the hope was that he could pick up right where he left off. However, he was assigned to the American Hockey League’s Bakersfield Condors before the season, due to head coach Dave Tippett’s desire to have quicker skaters on the bottom two lines.

The 30-year-old used the demotion to the AHL as motivation and tallied four points in as many games, which earned him a recall to Edmonton. Since rejoining the big club, Gagner has been in and out of the lineup, but did a great job filling in for Nugent-Hopkins against the Arizona Coyotes on Sunday when he was out with a hand injury.

Now in his 13th NHL season, Gagner has evolved into a more complete player and understands that he needs to play a specific role to extend his career. Set to become an unrestricted free agent next summer, he has 56 games left this season to prove he deserves another contract. And, if the Oilers continue to play the way they have been through the first third of the season, he might finally have the opportunity to play in a playoff game in Edmonton this spring.