Everybody gets one! NBA Finals MVP Kawhi Leonard donates a million backpacks to SoCal schools 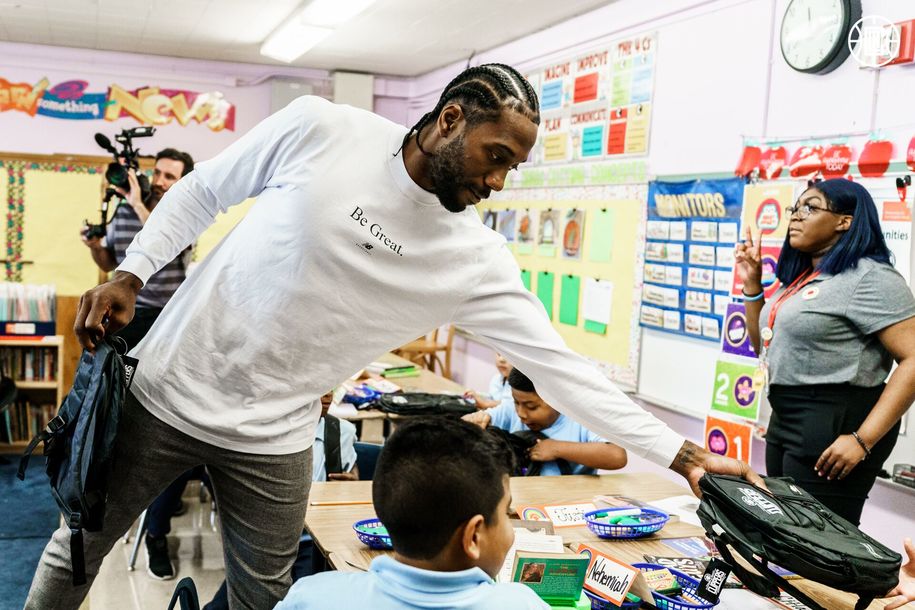 Students at K-12 schools across Southern California got a big surprise on Tuesday, courtesy of two-time NBA Finals MVP Kawhi Leonard, who also happens to be one of the newest additions to the L.A. Clippers roster. Leonard, along with the L.A. Clippers Foundation and celebrity nonprofit Baby2Baby, provided one million backpacks to students in Los Angeles, Moreno Valley, and Inglewood—meaning that every single student in those three districts received one.

Every. Single. One. Rather than bow down to common rhetoric that spends more energy wondering if people who don’t need help are getting help, Leonard’s big giveaway was for everyone. While over 80% of LAUSD’s 600,000-plus students qualified for free or reduced lunch in the 2018-2019 school year by being low-income, homeless, or in the foster care system, this “backpacks for all” decision wasn’t made with the kids whose families could afford backpacks in mind. Rather, the partners in the giveaway took this approach for the benefit of the children whose families couldn’t afford a new book bag this year.

How does giving free stuff to children of means help children in poverty? It helps combat the shame of accepting what some might call a handout.

In many cases, backpacks are not only used for school supplies and books but for clothes and toiletries, as far too often (LAUSD) students are forced to carry all of their possessions with them each day in the event where they sleep tonight is different from where they slept last night.

In addition, families are sometimes forced to decide between buying book bags and school supplies and utilities, food and even rent. The scenario is similar to that of Moreno Valley and Inglewood, which is why Leonard and the Clippers decided to supply bags for all of the students in those three districts — one to meet the need but two, so no student would be stigmatized.

A similar innovative approach is being utilized when it comes to feeding students. Take Atlanta Public Schools, where this year, every single student in 77 public and charter schools, regardless of family income, will be provided not just a free lunch, but also a free breakfast. In this case, addressing this universal basic need is essential to student success, and in districts with high need, the meals are funded by the federal government.

The U.S. Department of Agriculture provides federal reimbursements for the meals under a program Congress authorized in 2010. Supporters have touted the aid as a way to cut paperwork, lessen the stigma poor students could feel for receiving a free meal, and make sure no child goes hungry.

To qualify for the federal program, school districts must show that at least 40% of students receive food stamp benefits, homeless services, or are enrolled in pre-kindergarten Head Start programs.

Food, of course, is the fuel that makes our bodies work, and going without food can have disastrous, far-reaching consequences. The Borgen Project, a Seattle nonprofit devoted to combating global hunger, sums up some key effects of hunger quite well.

(H)unger also directly affects the brain in several ways. Due to the lack of essential nutrients, vitamins, protein and minerals, severe and continuous hunger can inhibit the brain from developing cognitively, socially and emotionally, all of which affect an individual’s ability to read, concentrate, memorize and even speak.

Other key organs are also directly affected by hunger. Impaired vision and other eyesight issues result from a lack of Vitamin A, and the gums and teeth can become damaged due to calcium deficiency. Possibly even worse is the effect that extreme hunger has on the immune system. If the immune system lacks basic vitamins, nutrients and minerals, then it cannot properly defend the body against disease, which is why developing countries are constantly battling a variety of diseases.

As mentioned above, hunger can make it difficult to study and learn, which is why extreme poverty and hunger are often related to a lack of proper education. Especially in developing countries, children who experience hunger from a very young age tend to struggle academically and have a lower IQ when compared to the academic performance of well-nourished children.

As if we needed other reasons to let schoolchildren eat, Atlanta Public Schools also reports that universal free meals cut down on administrative costs, as there’s no need to print or process applications for free or reduced lunch. There’s also no risk of going viral for chasing down lunch debt, like New Jersey’s Cherry Hill Public Schools, which is just the latest district to make headlines for proposing cruel policies for hungry children.

After the first $10 in debt: Their lunch will be a tuna fish sandwich. Those who owe $20 or more will get no lunch at all until the debt is paid.

Assistant Superintendent Lynn Shugars unveiled a proposal to tweak the district’s tuna fish sandwich policy at a school board meeting Tuesday night, citing a $14,343 meal debt incurred by about 343 students in the South Jersey school district. She said the district opted for tuna fish over peanut butter “because we know that our little ones would probably very happily eat peanut butter and jelly sandwiches until the end of time.”

You read that right. They switched to tuna salad because kids might enjoy the PB&Js enough to cause inaction by their parents. Such policies are EXACTLY why Minn. Rep. Ilhan Omar (and 20 Democrat co-sponsors) introduced the No Shame at School Act in June.

Rep. Ilhan Omar introduces the No Shame at School Act in June, with co-sponsoring Reps. Deb Haaland and Ben Ray Lujan at her side.

The bill has since attracted an additional eight Democrat sponsors, with 14 states represented in all—but not a Republican among them.

In 2013, Clayton County Public Schools became the first metro Atlanta district to offer no-cost meals to all students. Since then, more students are eating school meals. About 37% of Clayton students ate school breakfast before the program, compared to 47% now. School lunch participation increased from 82.3% to 85%. […]

Drew Charter School is among the Atlanta schools that started offering no-cost meals to all students this year. The junior and senior high school campus had previously participated in the program from 2015 to 2017.

In the first few days of this school year, the number of Drew elementary students eating school lunch nearly doubled.

Atlanta school officials are also working to find innovative ways for families of means to channel their savings toward other programs for their children’s poorer classmates.

But back to all those backpacks and basketball. Since every student in the three beneficiary districts received the stylish black backpacks filled with school supplies, there’s no shame in using them or having them. The backpacks aren’t a scarlet letter of poverty … they’re just cool as heck, just like Kawhi Leonard.

The look on this kid’s face is EVERYTHING.

At Cloverdale Elementary School in Moreno Valley—Leonard’s alma mater—the 6’7” all-star spoke to fourth graders for just under a minute.

“You all know how hard it is,” he told the students. “So I wanted to start here today by giving away a million backpacks to Southern California. That’s one of my goals this year, to help on and off the court in the right way, and I feel like this is a great way to start. And I hope you guys know that the Clippers have your back.”

Nobody seemed upset that Leonard didn’t say much. His actions spoke for him.

“To have someone like him come back and meet with the students means so much,” Moreno Valley superintendent Martinez Kedziora said, barely able to hold back his emotions. “Our kids don’t get many opportunities to meet people like this, let alone someone who actually came from this area and went on to do remarkable things. I know this is a day that will inspire so many and a day they will never forget.

“I am just so grateful he is proud of where he came from.”

From the Moreno Valley event, Leonard headed to Watts, where along with some famous folks from Baby2Baby, they presented LAUSD with the biggest gift in the school district’s history.

Leonard wasn’t the only star power on hand in Watts. Busy Phillips, Nicole Richie, and Zooey Deschanel joined the fun.

The L.A. Times’  LZ Granderson traveled from school to school with Leonard, who is better known in the NBA world for his quirky laugh, rather than his words—and the superstar opened up about his memories and his motivation to him.

Leonard told me he […] remembered the former classmates who were foster kids who helped shape his desire to give back.

“I knew kids that didn’t have money for lunch, didn’t have a back pack, didn’t have school supplies,” he said. “I was always one of those guys who would lend out a pencil or notebook paper or gave someone money for food or shared mine. This is what I’m doing now, just on a bigger level.”

And if it’s up to him, this latest good deed is just the beginning of Leonard’s generosity toward his hometown.

Leonard talked about helping high schoolers get into college, funding entrance exams, even opening a community center so kids had somewhere to go after school.

He spoke eloquently about his desire to not only give back but to be hands-on in the process and more importantly, do so where he came from.

He’s definitely off to a pretty good start when it comes to that life goal, and to students across Southern California, he just became a hero they’ll never forget.