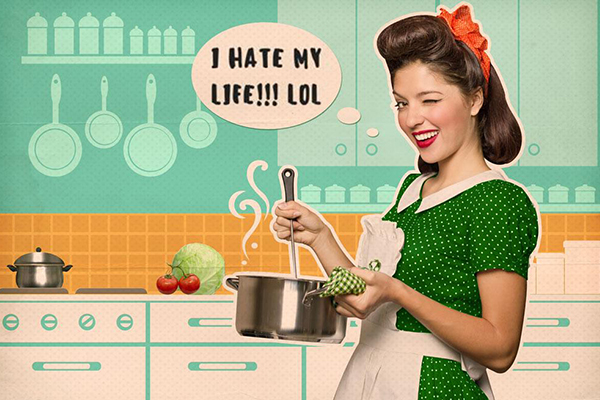 I absolutely detest housework. It’s one of those never-ending tasks that seem completely fucking useless.

I do it barely because, you know…KIDS. And, I must admit I do love it when the house is clean. I just feel like there’s no real point.

I realise there’s a difference between living in filth and a messy house. But what’s it all for? When my house is clean, it’s usually because my head is clean.

When I am proportionately in sync with my thoughts, it’s represented by an overly organised house. Let’s be honest, though. That actually hasn’t happened for years. I am completely out of my mind mad and have been for some time and it’s undeniably portrayed by the shit fight I live in.

Some people stress clean and lose weight when they’re under pressure.

Me, well, I manage to hoover only food and nap like I’m giving the cleaning fairies the best possible opportunity to visit. I mean, my house isn’t a pigsty, but it just never seems clean. I feel like all I do is move the piles of shit to different areas of the house. The kids have obtained mountains of crap and I accumulate paperwork like someday it’s gonna be worth something.

I do admire the mums who have all their shit together though. Their homes are immaculate and seem to have a place for everything. My house is always a fucking mess. The dishes manage to pile up, there’s dog hair, random loom bands and beads and for the love of god DO NOT look under the couch. I try, I really do. But aside from actually hating cleaning, the workload is never-ending. I have moments of Domestic Goddess bliss and always feel super proud of myself at the time. But anyone who knows me well will have a realistic view on my ability to maintain that standard. It’s usual course runs approximately two weeks. The downward spiral from Domestic Goddess to Lazy As Fuck will start after a night of a few too many drinks. My motivation to clean the house goes from On Point to Sloth immediately.

The four days following my awesome night of overindulging and aimless shit talking turns my house into a bomb site. Clearly, nobody picks up after themselves and obviously, I’m the only sucker who gives a shit about how the house looks.

So why do it? If nobody else cares, why the fuck should I? Apparently, it’s not ok to send your children to school in dirty clothes. It’s also a health hazard to serve new food on dirty plates. It’s inappropriate to let your dog eat out of the rubbish bin and my neighbours would complain if my yard was featured on ‘HOARDERS AUSTRALIA’.

So, I guess unless I want the council to condemn my home or manage to make enough money to employ a cleaner. I’m stuck with this bullshit job. I just want the world to know that as a woman, a mother and a partner, I did not at one time sign up to fulfill all domestic duties independently. I was under a false impression that this crap job was a joint responsibility between all parties living under the same roof.

The skid marks are NOT mine. The 16 glasses on the sink are NOT mine. The fingerprints and lick marks all over the walls and windows also are NOT mine. However, under sufferance, I will continue to clean the shit up in a half-arsed attempt to fulfill the duties assigned to me written in excruciatingly small fine print on the Adulthood Contract which I apparently agreed to (I must have signed it when I was drunk).

1. I am grateful for being a mother.

2. I am grateful I have a house to clean, and

3. I would prefer not to contract salmonella.

So today, I want to celebrate the mums who are forever picking up after every prick in the house. It’s a thankless job and one you didn’t know was actually yours until you didn’t do it one day and realised neither did anyone else. It may not be perfect but it’s enough and you’re handling that shit like a BOSS.

When you get the chance to put your feet up and have a glass of wine, do it. If there’s any complaints from the peanut gallery, I firmly suggest guzzling down that glass while raising your middle finger. We all know that housework bullshit will still be there tomorrow and there’s more to life than an immaculate home.