George Rainsford: ‘I’m working hard to get back the sweet, caring side of Ethan Hardy’ 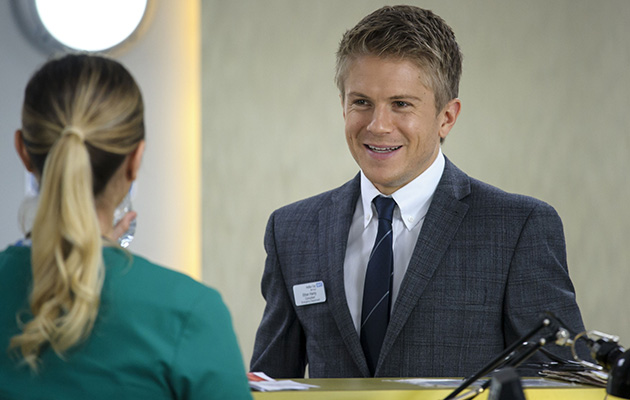 Alicia and Ethan: A new chapter?

Casualty doctors Ethan Hardy and Alicia Munroe have been through the ringer during their time on BBC1’s long-running medical drama. Major relationship moments include the ultimate sibling rivalry love triangle involving Ethan’s now-deceased brother Cal Knight, and Alicia and Ethan’s brief moment of happiness as a couple just prior to Cal’s murder by Holby thug Scott Ellisson in July 2017. Since Cal’s death, however, Ethan’s been preoccupied with his part in the death of Ellisson – he controversially allowed his brother’s killer to die instead of medically intervening, and has been haunted by his dark, twisted actions ever since. The couple were further distanced after Alicia (Chelsea Halfpenny), unknown to Ethan, was horrifically assaulted by manipulative junior doctor Eddie McAllister.

Recently the pair have tentatively been repairing their friendship and even shared a tender kiss. This week Ethan has his hopes up that they’ve turned a corner together, but when Alicia opens up about how she’s traumatised by Eddie’s sexual assault, which took place in her own bedroom, Ethan realises what Alicia really needs is a supportive friend.

We talked to George Rainsford, who plays Ethan Hardy, about the renewed connection between the unfortunate Casualty couple, and where he’d like to see them in the future…
Ethan and Alicia have a long, complicated history. How would you describe their relationship at present?

George Rainsford: “There’s a lot of history! At this stage Ethan’s turned a corner and realised that he’s been living quite selfishly and been self-centred. He pushed everyone close to him away to get through the Ellisson saga, and missed a huge life event of his best friend and former girlfriend, Alicia.” How did Ethan feel when he found out Alicia had been attacked by junior doctor Eddie McAllister?

GR: “Ethan was mortified that he’d missed the opportunity to be there for somebody that he obviously loves.”

Last week Alicia and Ethan kissed. Could this be the start of a new chapter for them?

GR: “Even though they’ve shared a kiss, at this stage Ethan’s a support to Alicia. He wants to be there for her, and he wants her to heal. That, rather than anything else, is his motivation I think. The ball is in Alicia’s court, there’s absolutely no pressure from him.”

Did you talk to Chelsea Halfpenny about Alicia and Ethan’s unexpected kiss?

GR: “Chelsea and I discussed it and both felt that at this stage it was too early to mean anything definite. For Alicia it’s more of a ‘thank you for being a support’. Obviously there are feelings there but so much has happened it’s hard to know where it might lead. Ethan understands that Alicia’s head is all over the place and is prepared to wait. The kiss was deliberately vague.”

How does Ethan feel when Alicia opens up to him this week?

Is that what why he offers to paint her bedroom? GR: “Yes, it’s a little idea he has. Ethan thinks if he’s able to give the bedroom a quick bit of DIY then perhaps Alicia might slowly be able to put this awful incident behind her. She needs somebody she trusts being close to her. Now Ethan knows Alicia’s horribly sad situation he has an empathetic quality that had been missing of late.”

Are you enjoying the return of Ethan’s caring side?

GR: “I am actually. It’s been a great year – I’ve had lots to play. But I’ve also had meetings where I articulated my worries that if we push Ethan’s dark side for too long I’m going to lose the ability to come back from that and have him redeem himself. The events with Scott Ellison were so big they made him act out of character.” So Ethan’s on the road to redemption now?

GR: “Knowing the person Ethan is, now he’ll do anything he can to make other people’s lives better in order to make amends. I’ve definitely been working hard of late to get back to the sweet, caring side of Ethan. The heart of the person and good doctor is still there, but it was really fun getting to play a completely different side to Ethan when he went off track!”

Would you eventually like to see Ethan and Alicia back together as a couple?

GR: “Yes, I think so. Chelsea and I both felt we’d invested in that story from early on, but because of the Cal incident Alicia and Ethan didn’t last very long when they finally got together. From the feedback I’ve had viewers want it [too], but obviously nobody’s interested in people just being ‘happily-ever-after’ on screen. There are things we’re trying to explore that test their relationship. Alicia and Ethan have both been through so much they’re potentially not the same people from when they first fancied each other.”

Maybe it’s too much to ask that they come through so many traumas as a couple?

GR: “Only time will tell. They’re definitely still close but it’s just in what capacity. There are more stories to tell with this relationship…”

Casualty continues on Saturday 15 September on BBC1 at 8.25pm.

The post George Rainsford: ‘I’m working hard to get back the sweet, caring side of Ethan Hardy’ appeared first on What' s on TV.