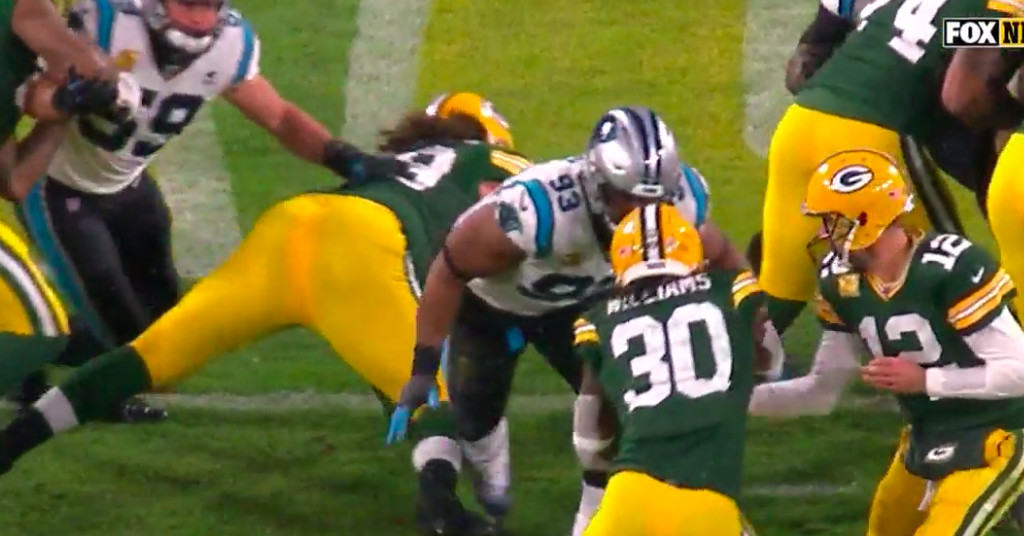 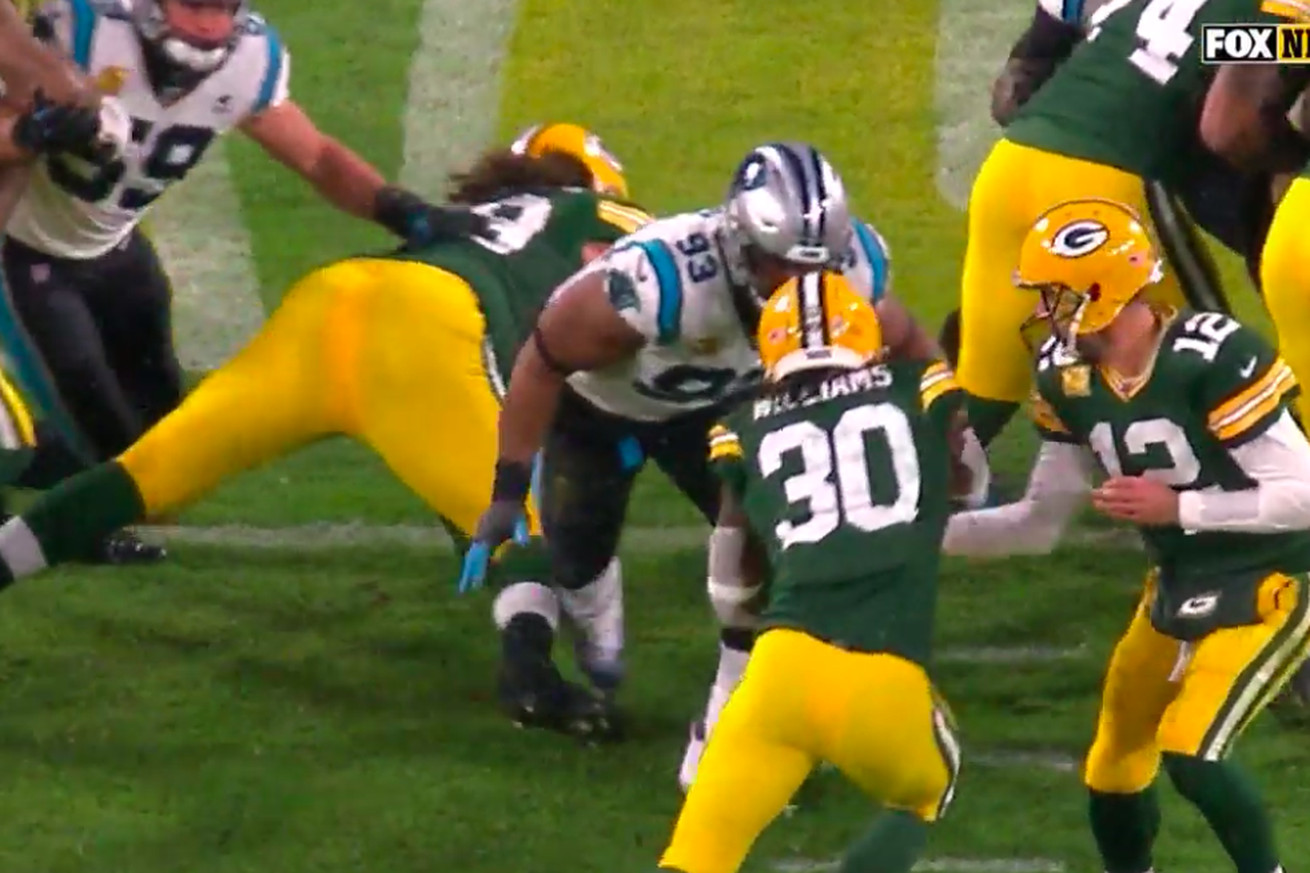 An undeserved roughing the passer penalty gave way for a massive goal-line stop.

Gerald McCoy cost the Panthers 15 yards thanks to an underserved roughing the passer penalty. He wasn’t going to let it cost his team seven points.

McCoy was the star of a three-act play about a wronged man who finds justice, all over the span of less than five minutes of game time in Week 10’s showdown with the Packers. Twelve plays after his hit on a sprawling Aaron Rodgers was deemed too brutal for a quarterback, McCoy’s eclipse-creating takedown of Jamaal Williams made sure his past mistake had no impact on the scoreboard. In one drive, McCoy sapped his team’s momentum and then brought it back, possibly even stronger than before.

So how did it happen? It started with a very familiar play for Green Bay fans.

For once, the Packers were on the right side of a questionable roughing the passer via body weight call. Rodgers was flattened in his own end zone after just barely getting off a third-and-long screen pass that fell at Williams’ feet. But McCoy’s hit saw him roll through the former MVP rather than bear down on him with the full force of his body — much like Clay Matthews had in what should have been a game-sealing hit on Kirk Cousins last fall. And just like that Matthews hit, it led to a flag that turned a change of possession into a long drive downfield:

McCoy went to the side like the league wants… and they still threw a flag for “roughing the passer”… That’s a HORRIBLE call. pic.twitter.com/bvIULMiha7

Instead of forcing Green Bay to punt from its own end zone toward the end of the second quarter, the Packers had a new set of downs. Rodgers quickly turned this second chance into big gains; Green Bay was in the Carolina red zone four plays later.

The Panthers regained their composure with their backs against the wall. Eight plays inside the red zone led to 17 yards, three first downs, and one overturned touchdown pass to Jimmy Graham. None of those plays led to points, however. With two seconds left on the clock and the ball at the one following a pass interference call in the end zone, Carolina just had to survive one more play to snuff out the Packers’ drive and keep a bad call from turning the tide of the game. Rather than settle for a field goal, Green Bay was going to make its last play of the half a shot at the end zone — and it was going to have to get through the Panthers’ defensive line to get there.

Then McCoy roared back to life

McCoy had been neutralized in the dozen plays following his roughing the passer flag. The Packers planned to dive right back into his lair facing first-and-goal from the 1-yard line with only two seconds left in the half. Rodgers handed the ball off to Williams for a dive up the middle — only to be met immediately by the defensive tackle who had a little extra motivation to keep Green Bay out of the end zone.

McCoy ran through Williams like a plow destroying a snowman, with an assist from Vernon Butler. The clock ran out on the second quarter, leaving the Packers with an 86-yard drive that ended in zero points. Minutes after kick-starting Green Bay’s offense, the veteran lineman shut off the ignition and kept his team from a two-possession deficit at the half.

McCoy didn’t exactly need redemption after a bad call cost his team, but he showed the Panthers can rely on him in big moments by being the man to ruin the Packers’ scoring hopes. With one monster charge at the goal line, the former Buccaneer wiped out nearly a full field’s length of progress and kept his team within striking distance at Lambeau Field. That’s exactly what Carolina was hoping for when it signed him this offseason.