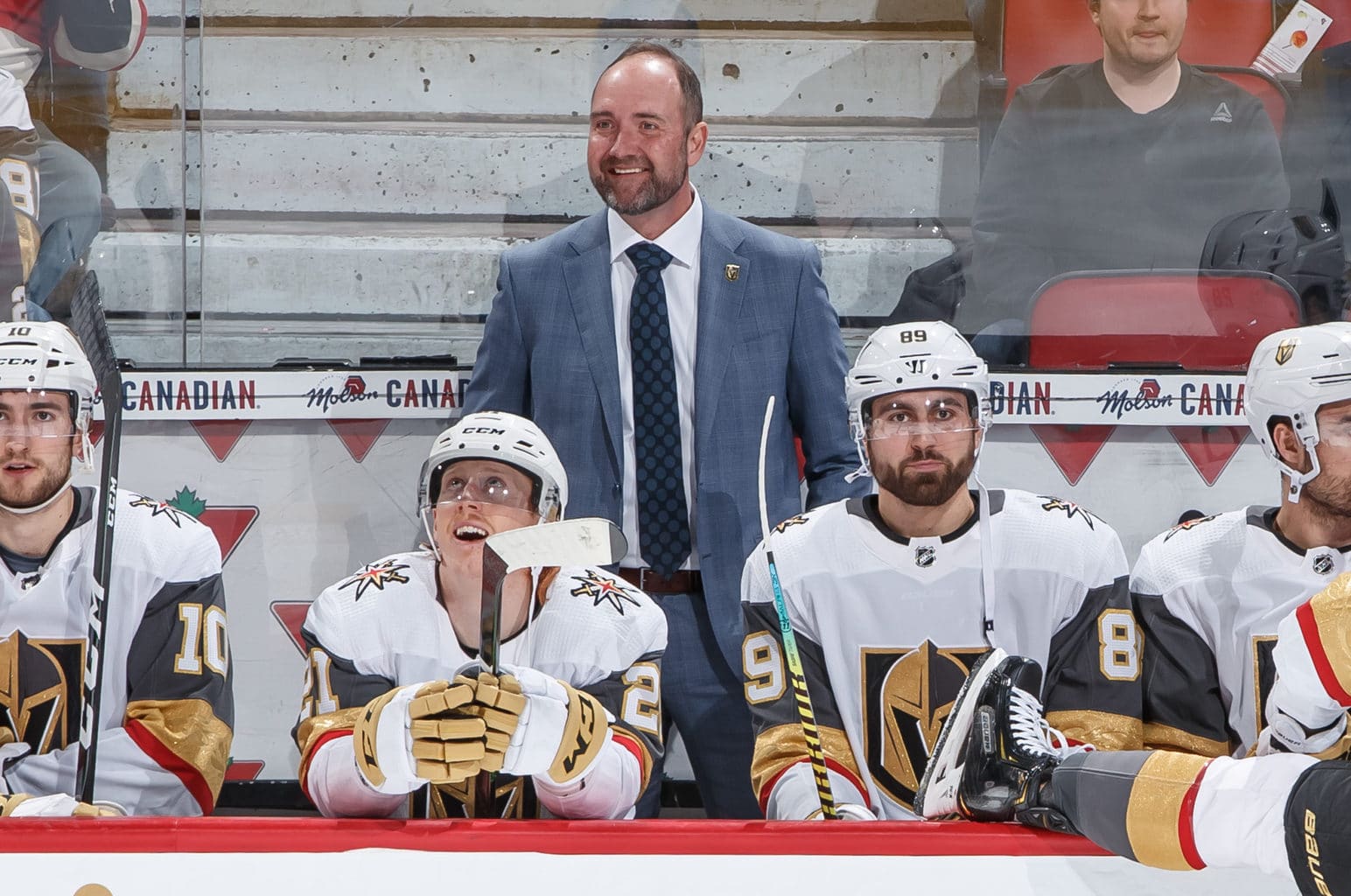 The Vegas Golden Knights emerged as the first seed in the Western Conference after going undefeated in the round-robin section of the Stanley Cup Playoffs. This new format that the NHL implemented created a whole new experience for the fans and players while keeping the same anything-can-happen feeling that comes with playoff hockey.

Vegas entered the round-robin stage without their leading scorer, but the team was able to overcome this adversity. Now, entering the first round of the playoffs, here are the five biggest takeaways from the Knights’ round-robin games as they are set to play the Chicago Blackhawks.

With the playoffs starting later than usual, it allowed Alex Tuch to fully rehab his injury. After suffering a lower-body injury on February 13 against the St. Louis Blues, Tuch did not see the ice again during the regular season. At that point in the season, Tuch was not producing at his normal rate.

Due to the extended time between the pause in the season and the start of the playoffs, Tuch was able to fully recover and work back into the lineup with ease. He became an impact player right away as he scored in the exhibition game against the Arizona Coyotes. This seemed to give the 24-year-old forward confidence heading into the round-robin. 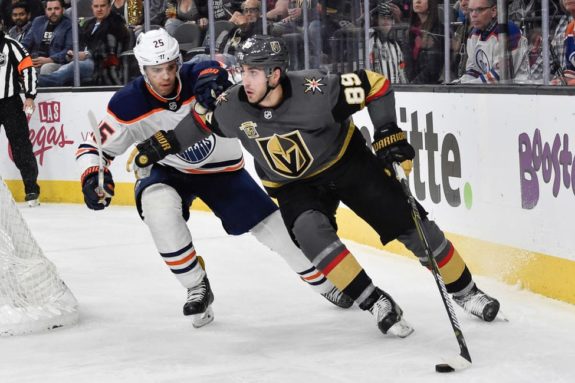 Tuch has been a welcomed addition to the lineup. (Photo by Jeff Bottari/NHLI via Getty Images)

Tuch has produced three goals, including the overtime winner to ensure Vegas received the first seed. He started the round-robin on the third line with Nicolas Roy and Nick Cousins, but during the Colorado Avalanche game, he took shifts with William Karlsson and Mark Stone on the top line. This shows that head coach Peter DeBoer has a growing sense of confidence in the forward. With Max Pacioretty still not in Edmonton, this line pairing could see the light of day once again in the first round.

The Importance of the Fourth Line

Throughout the round-robin series, Deboer has relied on his fourth line more than other coaches in the playoffs. The line of Ryan Reaves, Thomas Nosek and William Carrier has started each of the seeding games Vegas has played. Starting this line allows the Golden Knights to put the opposing team on their heels early. During the regular season, Reaves led Vegas and the NHL in hits with 316.

Carrier finished in second on the team with 213 hits. Although they are known for being a physical force on the ice, this line has been able to produce as well. During the round-robin, the fourth line produced one goal and three assists. The lone goal, scored by Carrier, was the game-winning goal against the Dallas Stars. A reason for the line’s success is how hard they forecheck. 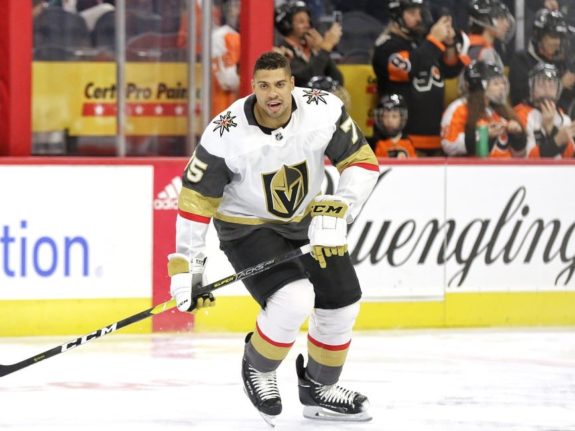 Reaves brings the energy from the opening faceoff. (Amy Irvin / The Hockey Writers)

The relentless attack on the opposing defenseman allows this trio to pin teams in their own zone. This, in turn, tires out the other team and gives Vegas the upper hand as the game goes along.

Also, Deboer is not afraid to put them out against top players. Multiple times throughout the round-robin, the fourth line has been on the ice in the final minutes with the goalie pulled. With this line being such a vital part of Vegas’ success, the Golden Knights will need these three to keep their level of play up in order to make a run at the Cup.

Improvement on the PK

During the regular season, Vegas did not have a strong penalty kill. They finished the season by killing 76.6% of their penalties which was good for 27th in the league. Throughout the round-robin games, this was something that the Golden Knights needed to fix to be successful.

Vegas ended the round-robin games with  80% of their penalties killed. They held the Blues scoreless in three attempts with the man advantage. This is more impressive knowing that the Blues held the third-best power play in the league during the regular season at 24.3%.

Looking at the first round, the Golden Knights will have to defend against another star-studded power-play unit. The Blackhawks were able to score on 22.2% of their power plays against the Edmonton Oilers. Both Jonathan Toews and Dominik Kubalik led Chicago with two power-play goals in the qualifying round.

In order to be successful against the Blackhawks, they will need to limit how much they play with a man down. Against the Avalanche, Vegas was able to kill off five of their six penalties. Although this may seem good at first glance, spending that much time in the box can cause a team to get fatigued much quicker. That will allow a younger team like Chicago to have a possible advantage at the end of the game.

The Battle Between The Pipes

The Golden Knights have a unique problem on their hands heading into the first round. They have two goalies that could both easily be named the starter. Marc-Andre Fleury and Robin Lehner have split time in the bubble so far. However, with both goalies being undefeated, it does beg the question of who will start in net for Game 1?

Lehner was able to defeat both the Stars and Avalanche. In both games, he surrendered three goals but faced a consistent attack of shots. Fleury has given up five goals in his two games, but four of them were against the Blues who only had 17 shots on goal during the game.

The Blues were the best team in the Western Conference before the break and played Vegas to high scoring games throughout the regular season with the winning team scoring at least four goals in each contest. In the exhibition game, Fleury managed to fend off 22 of 23 shots against Arizona. DeBoer has not made up his mind on who will guard the crease for the first round. 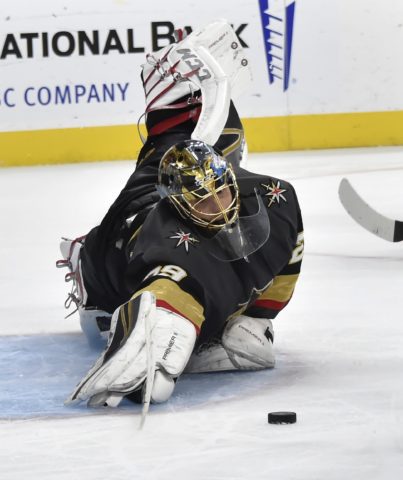 He said, “I believe we are going to need both and both guys are going to play.” As of right now, it is still anyone’s net to take, but that should not be a problem as both goalies are starting caliber. Fleury has the playoff experience and three Stanley Cups, but Lehner was nearly unbeatable for the Golden Knights since being acquired at the trade deadline.

Due to the 24 team tournament setup, the playoffs look much different than they normally would. With the surprise upset over the Oilers, Chicago is making the most of this March-Madness style set up for the playoffs. Vegas was able to clinch home-ice advantage throughout the playoffs, but that only means having the last change in the bubble.

The Blackhawks were able to beat the Oilers in their own arena as the 12 seed. They shut down the offensive monsters of Leon Draisaitl and Connor McDavid to advance to the first round. The Golden Knights cannot afford to take the Blackhawks lightly. The Hawks are the youngest team in the playoffs but are receiving high-level numbers from their rookies.

In his playoff debut, Kubalik was able to put up five points. The absence of fans could be an advantage to the Blackhawks as well. Without a hostile crowd, it has allowed their rookies to ease their way into playoff-style hockey. The Golden Knights cannot bet on the inexperience of Chicago either as they have a solid veteran core as well. With Toews, Patrick Kane and Duncan Keith all having three Stanely Cups it makes the Blackhawks that much more dangerous. 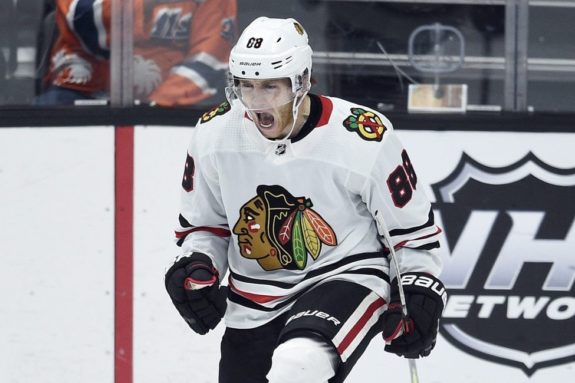 Kane is still one of the best offensive players in the game. (AP Photo/Kelvin Kuo)

Both teams play a fast-paced, high scoring style that allows for highlight-reel moments. The Golden Knights have more scoring depth than the Oilers. This will be an advantage they have over the Blackhawks. Chicago will not be able to focus on just one line in this series.

Another advantage that Vegas holds over Chicago is their fourth line. As stated earlier, Deboer is not afraid to play his fourth line throughout the game. The physical play that comes with this line could possibly intimidate a younger team.

Lastly, the Golden Knights have an advantage between the pipes. This not only comes from their stats but the fact that Vegas has split the net between Fleury and Lehner. This allows the duo to get more rest between games, unlike the Blackhawks who have had Corey Crawford play each game. Lehner was also traded from Chicago to Vegas at the deadline, so there could be some added internal motivation for him to beat his former team.

With the first seed secured, the Golden Knights seem confident heading into the first round of the Stanley Cup Playoffs. Although there are still some questions left to be answered, the team seems to have started up right where they left off when the regular season came to an end.

The post Golden Knights’ 5 Takeaways from Round-Robin appeared first on The Hockey Writers.