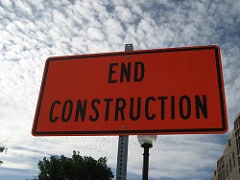 I asked my neighbor what I should write about and he referred me to an article in our local newspaper. It seems that in my town greed is marching on.

Montclair, New Jersey is the place I call home these days. It is a nice town with a combination of a country and a city feel. But since I have moved here when I got married some fourteen years ago I have seen the town lose more of its country and gain more of its city. The most noticeable of these developments consist of tall buildings along the main street called Bloomfield Avenue. Still, this part of town always had that city feel so the taller buildings are not that alarming.

On my own street, we have seen about half a dozen healthy and vibrant trees cut down. There was nothing wrong with the trees so I presume the owner didn’t want to keep up with the maintenance or feared that they would fall damaging a home in a storm. I don’ t think that they gave a thought to the birds and squirrels which called those trees home. Greed is a specific kind of selfishness, greedy people are almost always self-centered and uncaring.

So the latest assault on nature in our town is that two variances were granted to transform a wooded lot into a home. The two variances were because the property size was too small and for the parking out in front of the house. The neighbors on the street were aware that there was a proposal for the house to be constructed but weren’t aware that it was finalized. They literally became aware with the sound of the cutting down of the trees.

I am familiar with the property if not intimately. It is at the end of a dead end street and beyond the property, there is a park. So the wooded property fits in nicely with the who scenery of the block.

So what was the motivation of the township of Montclair to grant to permits? My neighbor suggests that it is because they are solely focused on money. That the government lusts for the extra income that the property will bring in by taxes. I can see no other reason why they would disturb nature to build yet another house.

There are other things that the town has down that made no sense. They put in some decorative designs embedded in the road. I’m not sure about the price of this but none of the efforts lasted. Instead, they were dug up, some rather quickly. If memory serves me right on the county road of Grove Street they lasted only several months until they were destroyed in repairs.

Another thing the town has done is that they have decided to install Belgium block curbs in the entire township. My one friend organized her neighbors to sign a letter saying they didn’t need repairs on their curbs as they were perfectly fine.

Taxes in Montclair have recently taken a sharp climb. Of course, the assessed value of houses always increases as well. As an end result, it amounts into giving more money over to the town. Unfortunately, it seems that the services aren’t increasing.

Montclair is in the greater New York area. Without traffic, one could drive into midtown Manhattan in about twenty minutes. With traffic, it could take hours. Thirty years ago I lived in Hoboken which is just over the Hudson River from Manhattan. Since I called that place home the town has begun to go through a transformation. The buildings newly constructed by the river have risen to such heights that it seems that part of Hoboken is but an extension of New York City. I fear the same thing will eventually happen to Montclair. The country will be driven out by the city.

Gentrification. It is a nice word for running the power people out of town. It is happening not only in Montclair but all around the country. As the divide between rich and poor grows we will soon live in a land where one is either rich or in abject poverty. The elimination of the ‘middle class’ is purported to be a catalyst hastening the ruin of a civilization. Greedy people in their lust for mammon grab all they can unaware that they are undermining the very foundation which supports them.

Please check out my books. My memoirs “More Than The Madness” tells my story of successfully dealing with bipolar. https://amzn.to/2KZBkDe