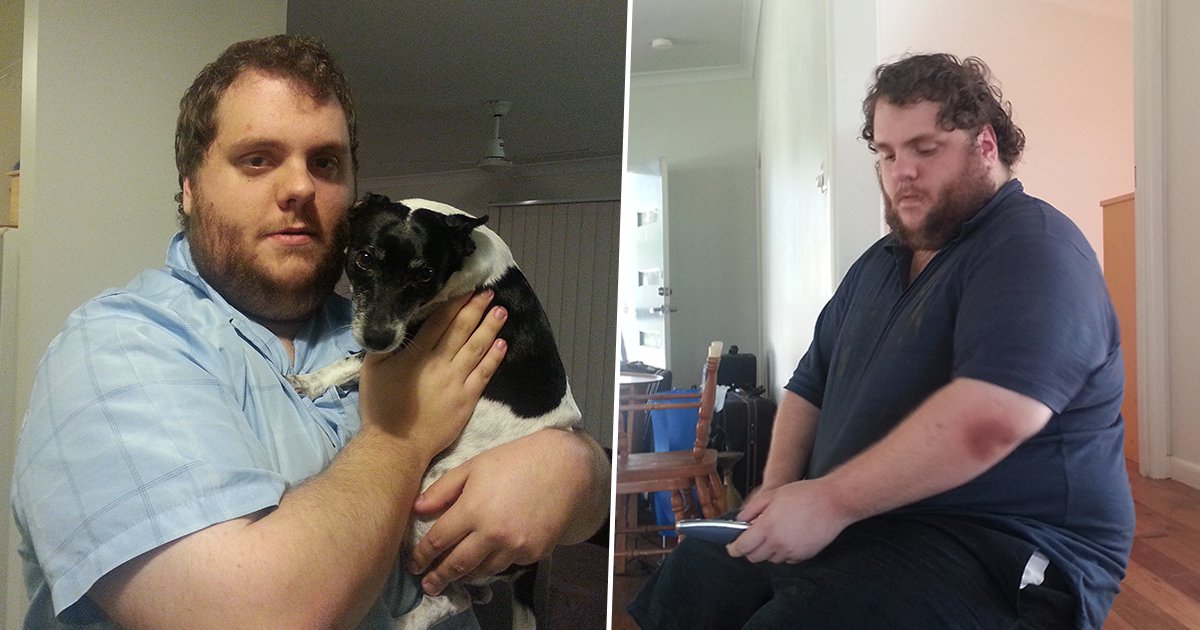 A guy has lost more than half of his body weight determined to make his mum ‘proud’ following her suicide.

27-year-old Samuel Brereton from Melbourne, Australia, lost his mother in 2014 when she took her own life leaving him heartbroken.

Knowing his weight was a concern of hers throughout life, Sam started his journey towards change in 2015. At his lightest Sam weighed 10 stone but has since got a personal trainer who has helped him build muscle and achieve a comfortable weight.

Speaking exclusively to UNILAD, Sam explained how his mother’s death motivated him to begin his weight loss mission.

I have been overweight since 2006. After my grandmother passed away in 2007, my mother became heavily depressed so she often just left me to my own devices regarding diet and exercise. From that point I just slowly ballooned and got bigger and bigger. It really just snowballed from there.

I found her and though she had already passed away I attempted CPR to no avail. We’d been living together as mother and son for the 10 or so years since her divorce in 2005, so we were incredibly close.

Mum was always worried about my weight but I never really knew how much until after she passed. I desperately searched for a suicide note, or any sort of reasoning or message from her.

Unfortunately I didn’t find anything other than her stories of regret, worry and anxiety regarding me. Pages of writings about how she was worried I would die and that people ridiculed her for my weight and doctor’s warnings that I’d die before her.

Knowing that my mother may or may not have killed herself because of me, made it click that my weight was a heartbreaking concern and must have made her life a misery due to the constant worry. Swapping McDonald’s for fruit and vegetables and fizzy drinks for water, Sam changed his whole diet and began counting calories.

Sam started doing food prep and being conscious of what he was eating, and allowed himself a treat every now and again ‘just to keep myself sane’.

Before his transformation Sam didn’t exercise at all but by initially walking 10,000 steps a day – rain or shine – he worked his way towards regularly attending a gym and working out with a personal trainer. Not only does Sam feel healthier physically, but he told UNILAD he is also feeling better ‘mentally’ and ‘more confident’ when he looks in the mirror.

Sam is delighted with himself for ‘choosing to do something positive instead of wallowing in self-pity’.

He also added he knows he has made his mum Jan proud:

I loved my mother to the moon and back, and I truly regret the bad times, but I also remember the good times.

I truly miss her, and I imagine the look on her face if she were to see me now, and I hope that she is happy where I am now. I wish I could take everything back and just hug her one last time.

I am ashamed at my old self and how it made Mum feel. Now that I’m at a comfortable weight, I honestly feel the best I’ve felt in 15 years.

No way I will go back to that, I won’t let myself. The guilt from how it affected others, especially my mother, keep me on the positive path, and probably will do for the rest of my life. Sam admitted whenever he struggled during his journey hitting a wall, he simply remembered his mum which gave him the motivation to continue.

The memory of my mother kept me going. There were times where I fell off the wagon, but I crawled back on.

I didn’t have anything to lose other than the weight. I just thought of Mum, and I didn’t need anything else to inspire me.

If you’ve been affected by any of these issues, and want to speak to someone in confidence, please don’t suffer alone. Call Samaritans for free on their anonymous 24-hour phone line on 116 123.

If you have a story you want to tell send it to UNILAD via stories@unilad.co.uk. To license this article contact licensing@unilad.co.uk