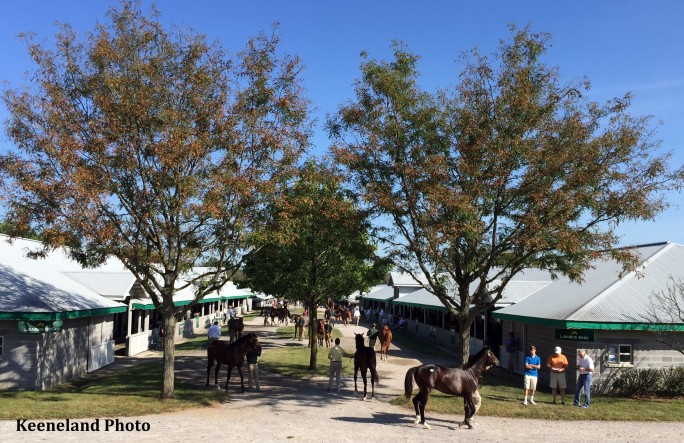 As the Kentucky Board of Veterinary Examiners (KBVE) considers what its next steps will be in the case of a dozen veterinarians who self-reported for modifying dates on radiographs, one surgeon’s testimony before the board raises questions about the practice of vetting horses at sale.

Earlier this year, 12 veterinarians at Hagyard Equine Medical Institute in Lexington, Ky. reported themselves to the Board – some for altering dates on pre-sale radiographs bound for the repository at public auction, some for being aware the misdating was happening. The misdating came to light as part of an ongoing civil lawsuit between three Hagyard field care veterinarians and Hagyard partners over a deal to buy into the company.

The KBVE conducted interviews with the veterinarians who self-reported, as well as staff members at Hagyard to learn more about whether those vets were guilty of rule violations. Transcripts of those interviews, which are part of the public record, were recently uploaded onto the Kentucky Department of Agriculture’s website.

Many veterinarians told KBVE they had not misdated radiographs since the clinic switched to digital machines roughly a decade ago. All said the misdating was done to balance busy schedules ahead of sales or for uniformity when a single view needed to be reshot. Auction companies require repository radiographs to be taken within a set range of dates prior to a horse’s sale, which veterinarians say required them to make multiple trips back to some farms ahead of longer sales.

Dr. Michael Spirito, longtime practitioner in the surgery department at Hagyard Equine Medical Institute, was interviewed by the Investigative Committee of the KBVE in May about his role in misdating. Spirito was asked to describe the reasoning and manner in which he modified dates on radiographs. He estimated 10 percent or less of the radiographs he had taken in the last decade had been subject to misdating.

Part of the reason Spirito’s workload was so heavy ahead of sales was his reputation for providing top-quality images.

“…The only thing I really had to differentiate myself from everybody else there was the fact that the images that I provided and the reports that I provided were of the highest quality and that was my goal always, to provide accurate images of the horses that I was x-raying,” he said.

According to Spirito, not all of his fellow veterinarians have the same motivation.

“You know, I don’t edit the films,” he said. “A lot of – you know, a lot of people in the industry will edit pictures. You know, they take the picture a little bit this way, a little bit that way to make the thing look a little better.”

Spirito did not elaborate on which veterinarians he suspected of editing pre-sale radiographs, when, or how frequently this may happen.

After radiographs are shot, veterinarians are asked by the consignor to read them and note any abnormalities in a radiograph report. The reports, although they are intended for viewing by the seller are often provided by the consignor to potential buyers in the barn or the back ring – which means they are read by non-veterinarians. Spirito told the KBVE committee he receives pressure from consignors to “make something sound better” in his radiograph report if sellers are worried a description will put off a customer.

“I mean that goes on—that goes on on a daily basis,” Spirito continued. “Why do you have to have that on there? Can’t you take that off? What’s my exposure if you take that off the report? And blah, blah blah. I mean it just goes on and on and it’s a massive issue for us.”

When asked whether he ever made alterations to radiograph reports at a client’s request, Spirito said, “I will make an alteration to an adjective.”

When asked to elaborate, Spirito described adding language specifying an identified issue “more than likely will not affect racing soundness.”

Joe Bilby, counsel for KBVE, asked the surgeon why he didn’t tell clients he could not alter reports at all.

“Pretty much that’s what I do, but, you know, in order to placate them I’ll change something that materially doesn’t actually change the significance of the sentence but makes them feel better because they want to have – they want their own verbiage,” Spirito explained. “I’m just rewording. I mean I still have to be responsible for the fact that if the report isn’t accurate they’re going to kick the horse back and then my butt’s going to be on the line.”

Spirito estimated he capitulated to pressure from consignors in this way in 5 percent or fewer of his cases.

In addition to shooting radiographs and writing reports for sellers, Spirito told the committee he was also employed by buyers to do pre-purchase examinations on horses at auction. Sometimes, this would result in his being asked by a buyer to vet a horse he had already examined for the seller. There was no rule against this according to Spirito, and he said he did not disclose to buyers if he or other Hagyard veterinarians had done the pre-sale work on a horse. (Spirito estimated more than half the radiographs in the repository for most sales came from Hagyard) Most of them, he said, would already be aware of this because the radiograph report in the consignor’s barn would have the author’s name on it, although he acknowledged radiograph images in the repository do not have the vet’s name on them.

When a buyer asks Spirito to examine a horse he already knows, he told the committee he conducts a physical examination and rereads the radiographs as if he didn’t know the horse. He acknowledged that when it comes to looking at radiographs “when I’m reading for a buyer, I’m a little bit more proactive than if I’m reading it for a seller.”

In rare instances, Spirito has realized, while vetting a horse for a buyer, that he may have made an error on his original report for the seller (or a colleague may notify him of a discrepancy between a set of radiographs and his report). Spirito was asked whether he modified reports to reflect updates like this.

“No, it’s too late. You can’t,” he said. “If a report’s in, it’s stamped, it’s done. You know, you’re just hoping that nobody else makes a fuss over it. You know, usually it isn’t anything big because I very rarely miss something big, but you know, just like anybody else, I miss something.”

On these rare occasions, Spirito said he notified consignors but often could not ‘call back’ a report, because there would be no way of knowing the number or identities of other veterinarians or potential buyers who had seen the erroneous report in order update them all equally.

With regard to the misdating, Spirito said he had spoken to several of his clients who sold horses at auction about the issue. Most of them were already aware some images had been misdated and were unconcerned.

Interviews with other Hagyard clinicians and staff showed at least one attempt had been made in the past to stop the practice of misdating. In 2006, Dr. Andy Clark, then-CEO at Hagyard, learned of misdating and told members of an executive committee at veterinarians “’This has to stop or this is going to bite you in the ass,’” according to his interview with the KBVE committee. Clark subsequently initiated changes to radiograph machines that would prevent users from changing dates; according to Clark, those changes were met with resistance from the surgery department.

When asked whether his colleagues had expressed any views about changes at Hagyard to address the misdating, Spirito said, “No, but I think that I brought up the point that we probably need a compliance committee.

“We probably need a compliance officer, you know.”

The KBVE has not yet decided what, if any, violations of Kentucky’s Veterinary Practice Act Hagyard veterinarians may have committed. If the Board determines violations may have taken place, it will hold an administrative hearing for each licensee.