The future looked bleak for Hawthorn fans after four rounds in 2017 where they endured seeing their team receive back-to-back 86-point drubbings at the hands of the Geelong Cats and more surprisingly, the Gold Coast Suns.

They knew their premiership window would soon close but nobody expected it to be this quickly and in such a devastating manner.

Having endured three years of premiership success, perhaps they were vindicated in expecting some sort of decline, but not one to this effect. Regardless, it occurred and there were a number of reasons attributed to this, from the departures of their A graders in Sam Mitchell and Jordan Lewis to their remaining stars reaching the twilight of their careers.

Motivation would also have been a factor as how long could a team continue to maintain their hunger for success after years upon years of glory?

Fast forward to 2018 and Alastair Clarkson has managed to rebuild his brown and gold empire with another finals campaign arriving. Nobody could have predicted such a turnaround, but could anybody really be surprised given the pedigree of the man they have leading their club?

Another shot at glory now beckons for this great club, but their path to redemption began back in the trying campaign of 2017.

On Friday the 16th of September 2016, the heavily fancied Hawks were overrun by a quicker, hungrier and more manic Bulldogs team and by the time the final siren went, Clarkson knew full well the era of this once great team had ended. 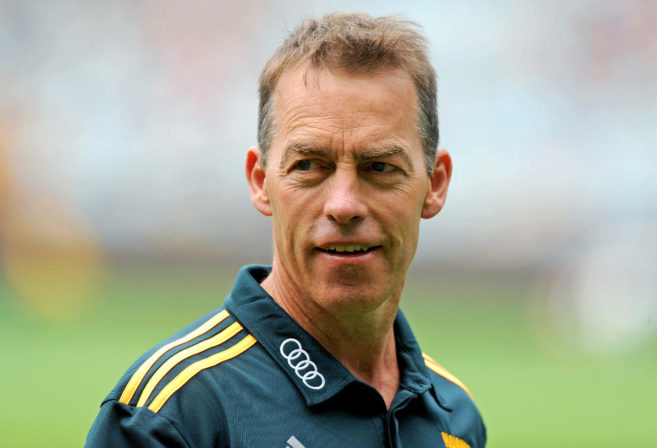 Their game plan had been exposed, teams had figured out how to play them and they were relying on star players whose time has passed both in terms of their playing style and their physical decline.

The game had moved towards a larger emphasis on contested ball which was an area Clarkson identified his team were weak in. The game plan had to be changed and the Bulldogs had seemingly set the blueprint with their contested ball and quick handball game plan to pierce through opposition defences.

Hawthorn saw a steady increase in the hand ball numbers which saw them veer away from their usual precision kicking strategy. The issue was the Bulldogs’ plan had been exposed as well which resulted in the premiers missing out on finals altogether.

Little did Clarkson know the ideas he was trying to instil were already a thing of the past. With such reliance on hand balls and playing a brand of football that was foreign to the club, the team saw their goals output dry up as the ball would constantly be turned over before reaching their forward line.

This was demonstrated in the deteriorating influences of their forwards whose marking numbers declined significantly.

This season, Clarkson has rebuilt the game plan again to incorporate a brand of football which is a mixture of contested ball, to move towards the modern game, while also maintaining the strategy that brought the Hawks so much success by instilling an attacking game plan built on kicking the ball rather than handballing.

The numbers don’t lie and are no doubt are a huge factor in the rise of this great club.

With the ball travelling faster between defence and attack, this has also presented more opportunities to their forward line again whose marking numbers have also increased, highlighted by Luke Breust’s 3.3 to 4.2 and Paul Puopolo’s 1.8 to 2.1.

In the space of 12 months, Clarkson had set the tactics in place to return his team to premiership contention. His next move was to focus on the personnel to execute his vision.

During their era of domination, many would think of names such as Sam Mitchell, Jordan Lewis, Luke Hodge, Josh Gibson, Cyril Rioli, Brian Lake and Jarryd Roughead when speaking about the team, but just as important were the batch of middle-tier players the Hawks possessed in their squad who were willing to do the one-percenters such as to lay the smother or block to get the ball into the hands of their A graders. 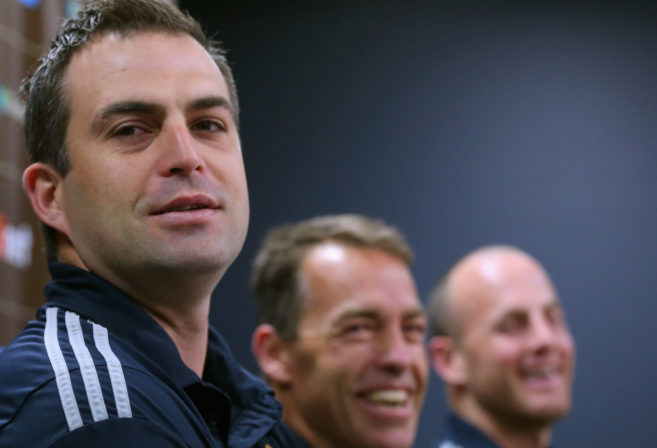 At the time, these players were the likes of Paul Puopolo, Ben Stratton, Liam Shiels, Taylor Duryea and Matt Suckling who were willing to run into space, apply pressure and provide the ball or space for their better ball users to exploit.

During 2017, an issue that arose for the Hawks were replacing these type of players, the players who formed the “gut” of the team. The departures of Mitchell and Lewis possibly minimized the priority for the need for this issue to be addressed as most of these middle-tier players were either transitioning to become the key players for the Hawks or their form was waning.

The players who were depended on to do the small things for their team were some of the likes of Ty Vickery, Billy Hartung, Taylor Duryea, Daniel Howe and Tim O’Brien, with four of those players now no longer a regular in the team as Vickery and Hartung have departed while Duryea and O’Brien are regulars in the VFL side.

A year later and the Hawks are in a far better position as Clarkson has injected a new breed of middle tier players into his squad with the likes of James Worpel, Jarman Impey, Ricky Henderson, Blake Hardwick and Harry Morrison not only bringing youthful energy but also the intensity and desperation that was missing during 2017. 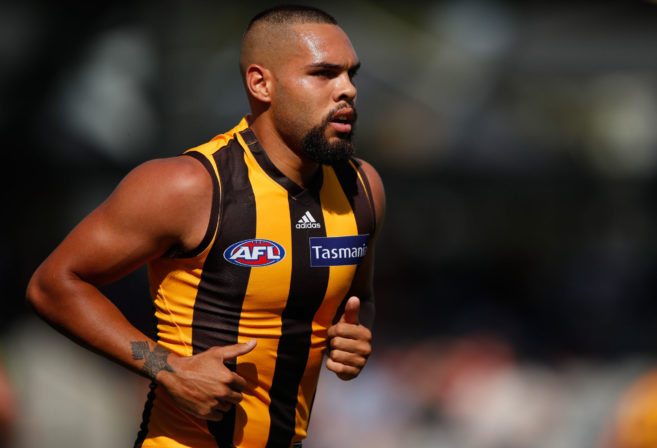 Players who do the grunt work and things off the scene are required to be desperate and hard working all the time and there is no doubt having won three premierships would surely take its toll on a player’s inner drive.

Clarkson saw this and he ruthlessly made the adjustments. Moments by these players matter. Look at Worpel’s contested ball win against Joel Selwood in the narrow win over the Cats, Henderson’s pressure goal from range that kick-started the Hawks against the Bombers, Howe’s clutch shot from range against the Cats from range in round 2 and Morrison’s relentless pressure on the opposition in every game.

All these moments came in games that were decided by less than ten points.

These players won’t necessarily always light up the stat sheet, dominate a game or kick a bag but what they do is, they make plays in moments that matter or at least influence the moments that matter and in a game of inches that is AFL, these moments could prove the difference.

The upside to this transition period was the emergence of players that were willing to step up and fill the void left by the club’s previous leaders.

The next generation had arrived in players such as Tom Mitchell, James Sicily, Liam Shiels and Jaeger O’Meara.

Perhaps, one of the more underrated and important aspects of a rebuild is time and patience. Players don’t just become guns overnight, it takes countless training hours, experience in big games and perhaps inner realisation for this to occur. With all of these factors, the common theme is time. Time is both the friend and enemy of any sporting athlete.

At the end of their era, their stalwarts who had brought them so much success were approaching the twilight of their careers. Sam Mitchell and Jordan Lewis both moved on, Hodge’s body was beginning to fail him given the brutal nature in which he plays the game and it seemed age had caught up to Gibson. There was little doubt in Clarkson’s mind that the engine room had to be rebuilt.

Into the team came contested ball machine Tom Mitchell and midfield gun Jaeger O’Meara. With a new midfield came a new blueprint for the Hawks to win the ball, while they are still largely reliant on a zonal defence when their opponents had the ball, the instructions now are to be quicker to any 50-50 balls and to be first to the ball as soon as it hits the ground. 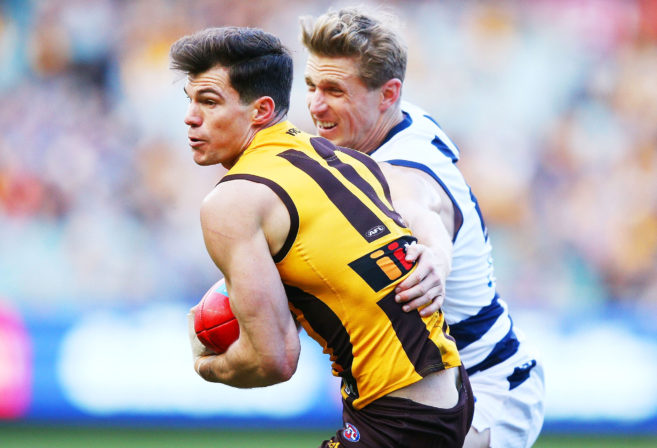 The tactics had changed as Hawthorn now possessed the contested ballplayers to do so in Morrison, Impey and Worpel who are willing to chase, hassle and close the space to try and win the ball back or put it into a scenario to be won back.

With this game plan and the players to execute, it has also seen an increase in the tackling numbers from the likes of O’Meara, who has risen his tackle average from 4 to 5.6 and Shiels who has edged up from 6.1 to 6.3 per game.

Hindsight can be a beautiful thing, and changes to the personnel and game plan like this would never have been made had the Hawks not been put through their trying times of 2017. As they say, you learn a lot more from failure.

Nobody would’ve ever thought, back at the start of 2017, the likes of Sicily would eventually become the general of the backline clunking contested marks or the likes of Hardwick and Burton, who were originally brought in as forwards to be regulars in the backline now responsible for the elite kicking that would enable their team to transition the ball from defence to attack. They’re only mistakes if you don’t learn from them and learn from them the Hawks have.

Regardless now of what happens for the remainder of the campaign, Hawks fans will surely feel a lot easier than they were 12 months ago. To go from missing the finals to not only qualifying but to qualify in the top four speaks volumes of Clarkson’s rebuilding process.

Of course, there would be many smaller factors that contributed to this including O’Meara having a full season under his belt to form one of the deadliest midfield partnerships with Mitchell to possibly needing one bad season to inject the hunger and desperation back into the side.

Having a consistently strong VFL side also aided the process in order to bring through the right players who have both the skill and drive to succeed.

After round 4 in 2017, Hawthorn were a club worryingly not only in decline but with no identity either.

Since then, Clarkson has moved swiftly to inject his team with the right balance of youth and experience to enable his team to challenge again and as tough as 2017 might have been, it has laid the foundation for the future of the brown and gold team.