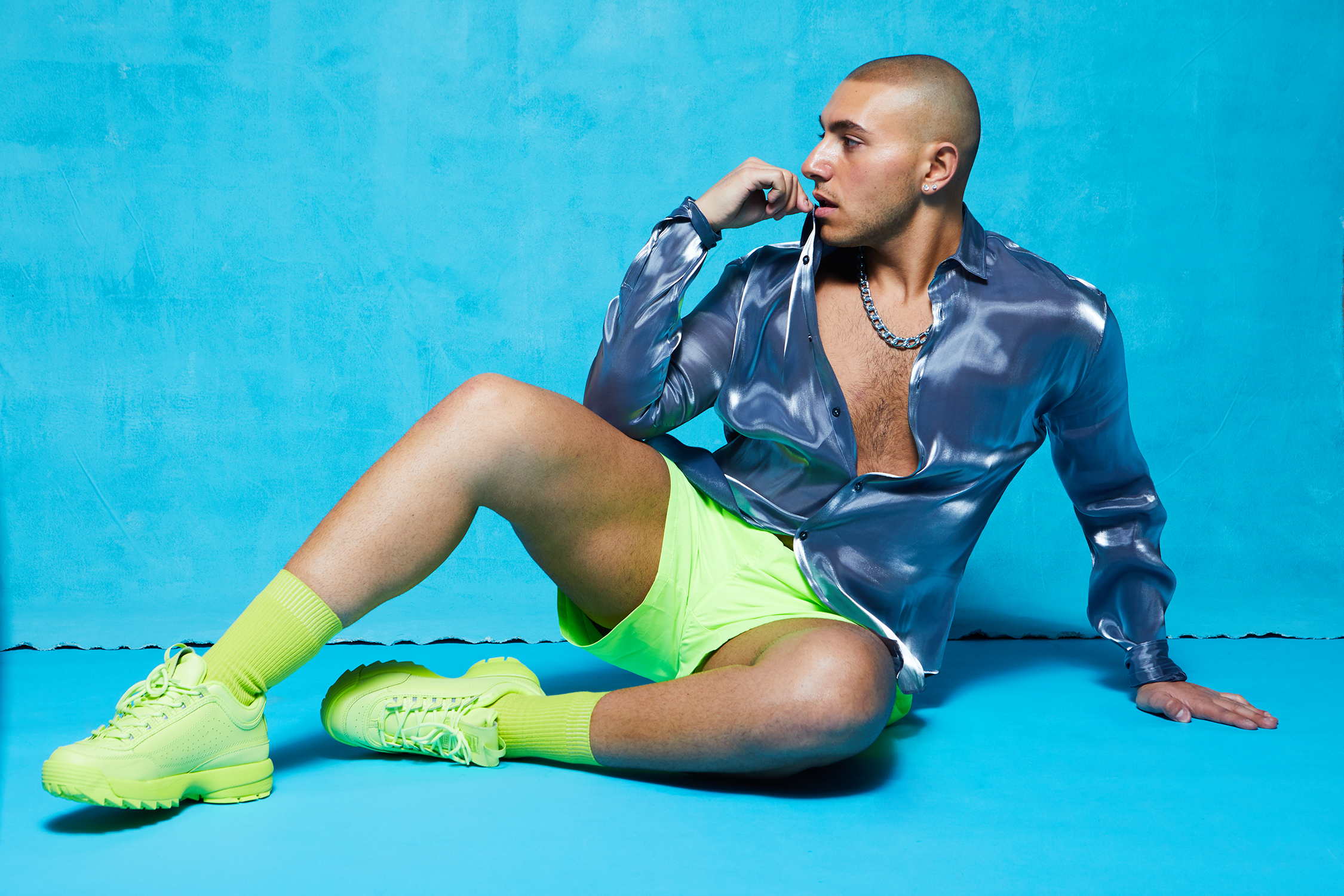 Mina Gerges has had a rollercoaster few years. Since 2015, when his elaborate Instagram recreations of celebrity red carpet looks went viral, he’s dealt with a fallout with his family, a body image battle, homophobia, and online trolls but has emerged as a body positivity champion and now, one of the faces of Sephora Canada’s new national campaign. Read on for our interview with Gerges about body diversity, LGBTQ representation and more.

Literally crying in excitement to share that I’m in Sephora’s new national campaign😭 When I was 9 years old, I’d sneak into my mom’s room and wear her red lipstick when she wasn’t home. I went to an all-boys school in Abu Dhabi and had to pretend to be someone I’m not so that I’d fit in and not get bullied more, and I always cherished these moments of joy I felt in my mom’s red lipstick. I think about my younger self, and how much he needed to know that he’d be okay. That there’s nothing wrong with him for being different. That our culture may never understand him, but that he’s so beautiful and nothing’s wrong with him. Fast forward to this monumental campaign – a gay Middle Eastern immigrant as the face of a makeup brand. I’ve been looking at this picture for a week, in awe of the confidence and power that radiate through this image. I see resilience and beauty, shining so bright and unapologetically as an openly gay Middle Eastern man despite belonging to a culture that systemically erases and persecutes our LGBTQ community. Representation matters, and I am grateful to fight for the visibility of our community and share the struggles we face, because we’re still so unrepresented in the media. To think that this can give hope to just one young queer Middle Eastern person that they matter, that they’re seen, and that there’s nothing wrong with them brings me tears. I’m beyond grateful that my first ever campaign is with a brand like Sephora that has always been a safe space for me to explore my gender expression, and that’s so unapologetic and bold about celebrating diversity. To me, beauty is reclaiming my culture from the toxic masculinity that’s so engrained within it, and creating new narratives about what it means to be LGBTQ and Middle Eastern/ North African. To that young, scared, lonely Mina who was always told there’s something wrong with him for being gay, I just want you to know that you’ll be okay, and you’re going to look so beautiful in billboards all over this country one day. Shot by the incredible @leeorwild 🌟@sephoracanada #SephoraPartner

Buzzfeed writing a post about your Instagram account is the sort of thing most teens dream about. But for Mina Gerges, then a 19-year-old student at Western University, it was a bittersweet moment. Yes, his cheeky red carpet recreations suddenly had thousands more likes, his inbox was flooded with emails and interview requests, and he’d even gotten a repost from Katy Perry but that Buzzfeed story had another consequence: it outed him to his conservative Egyptian parents.

“We somehow went eight months without talking about it,” recounts Gerges over black coffee at a Toronto cafe. But unbeknownst to him, his parents were Googling him every day, suddenly privy to the secret life that Gerges had been living for months. They’d seen the tongue-in-cheek recreations he’d been shooting in his bedroom with the help of his sisters (looks that included a dress fashioned out of a garbage bag and tinfoil to echo Jennifer Lopez’s outfit at the 2015 Vanity Fair Oscar party and curtains painstakingly painted to resemble Kim Kardashian’s look for the 2015 Met Gala), the interviews he’d been giving to various media outlets, and even the Arabic news sites that had picked up the story. Finally, several months after that first Buzzfeed post in January 2015, his parents sat him down to talk.

Yes, those are cheese slices on my head 🧀😂 #MetGala #MinaGerges #RitaOra

“The language barrier made it so difficult to communicate what I felt or to communicate even what it is [to be gay],” explains Gerges. “At the time the only Arabic word for what it means to be gay, ‘khaneeth,’ directly translated to something negative—it connotes being a pervert, effeminate, and is more commonly used as a way of saying faggot.”

Since then, fuelled by the efforts of LGBTQ activists, the terminology has expanded to include words like ‘mithli’ which translates to “same” or “homo,” but the perception of queer people as being sexually deviant is so ingrained in Middle Eastern culture that no matter how hard Gerges tried to mend the relationship with his parents, nothing worked. Hard as that was—and continues to be—it also gave him the motivation to use his social media presence to change the way the Arab community viewed LGBTQ people, and to give them positive examples to look to.

“A lot of what I do now is informed from what I learned trying to deal with my parents,” he says. “I’m educating myself on what it’s like to be queer in the Middle East and what I can do with my platform to talk about this or to create any kind of change. And I’ve found a community of kids who have felt exactly the way that I have felt. I take that back. Not just kids, but older men and younger men, queer women, trans people from the Middle East, who have found similarities in our stories.”

Gerges, who grew up between Cairo in Egypt and Abu Dhabi in the UAE, moved to Canada at the age of 12 with his mother and two sisters (his father came later). In both the countries where he grew up, being gay or even acknowledging LGBTQ people or rights was completely missing from the culture. In fact, he had no idea what the word ‘gay’ meant or even that it existed until someone called him that in high school. To be out and proud may not have been something Gerges ever saw growing up, but even after moving to Canada it was a very narrow version of “gay” that his formative understanding of the term was built on.

“The first time I Googled “gay men” all I saw was images of white, muscular, slim men,” he says. “So I thought that that was the norm.”

In trying to fit that mould as a young man grappling with his identity and sexuality, Gerges went down a spiral of eating disorders and body dysmorphia. He became anorexic in his first year of university, a time when he was not only struggling with being accepted in the gay community “as a plus-size man of colour” but also deeply unhappy studying science, something his parents had encouraged him to do. (He later switched to media studies.) When he began his celeb recreation posts in the summer of 2014, he was already suffering from anorexia.

“The people who may have followed me from the very beginning saw a Mina who was anorexic, at 150 lbs. And when I was in recovery shortly after, I started gaining back some weight and I was happy. But it was hard to find that happiness when I went on social media. I was at the height of my creativity where it wasn’t just drag, it was DIY, it was kind of like the golden age of my work. But all that people could comment about was my weight. I was like ‘I just spent eight hours painting this garbage bag so it can look like a million dollar dress and all you have to say is to call me a whale.’ It broke me. It was one of the worst things I’ve experienced in my life.”

He took eight months off social media between October 2015 and May 2016. During this hiatus, Gerges took the time to heal, using the distance from people’s hateful comments to learn how to love and accept his body. When he was finally ready to return to social media, he made a promise to himself that things were going to be different.

“I decided I wasn’t going to FaceTune my body anymore. Instead of hiding it I’m going to be so unapologetic about this body and maybe if people see confidence they will be less likely to say mean things. Honestly something as simple as not FaceTuning out stretch marks felt like such a liberating act of protest. And also reclaiming a platform that I was basically bullied off of.”

And that was the beginning of a new chapter for Gerges’ public persona. In 2018 he posted a shirtless picture of himself along with a lengthy caption about why it was “the scariest yet most empowering post I’ve ever made.”

“The feedback was unlike anything that I had ever experienced. It was a lot of people from the LGBT community, not just men, who were sharing with me very similar stories about their struggles with their body image and experiencing an eating disorder. That’s when it clicked for me. I’d felt so alone when I was 19-20 years old but here I was getting all these messages from people telling me they’d had the exact same journey but were ashamed to talk about it. That’s when I was like ‘this is my calling.’ Let’s shift this conversation.”

Last year, Gerges did a nude photo shoot with NOW Toronto for their annual Body Issue. He posted the nude photos on Instagram when the issue came out and lost 4000 followers.

“You see male models who are thin and muscular pose for pictures just like these, or even more scandalous ones, and those pictures end up in editorials and in ad campaigns for Dolce & Gabbana and Versace.” But when a body like his is nude, he says, the comments move swiftly from praise to criticism. “That double standard is why we need to talk about body positivity and the fact that bodies like mine, which don’t fit into this beauty ideal, experience the world differently and are treated differently because of it. It was crazy to get the backlash for that when thinner, more muscular guys are being praised for the exact same thing.”

“It was a voice that needed to be heard and a story that needed to be told,” says Samuel Engelking, the photographer who shot the images for the Love Your Body issue. Engelking, who has photographed the likes of Margaret Atwood, Ai Weiwei and MIA, says of working with Gerges, “When we first met on set I was immediately taken by his positive spirit and confidence despite the unusual circumstances of the shoot.”

This newfound confidence is what Gerges’ followers are responding to, and he’s seen a shift in the way they interact with him online, even though the negative and hurtful comments about him, his body and his Middle Eastern identity—even from others in the Arab world—do still keep rolling in.

“Giving up my culture as these, for lack of a better word, these haters would want me to, is not an option,” he says. “I refuse to be shamed out of my culture. It is mine just as much as it is yours. Nothing that you can do will prevent me from embracing being Egyptian and being North African. You cannot take that away from me.”

The post How Mina Gerges Went From Being a Viral Meme to a Body Positivity Champion appeared first on FASHION Magazine.