How Queen and Slim‘s Filmmakers Captured the Past, Present and Future of Black Music 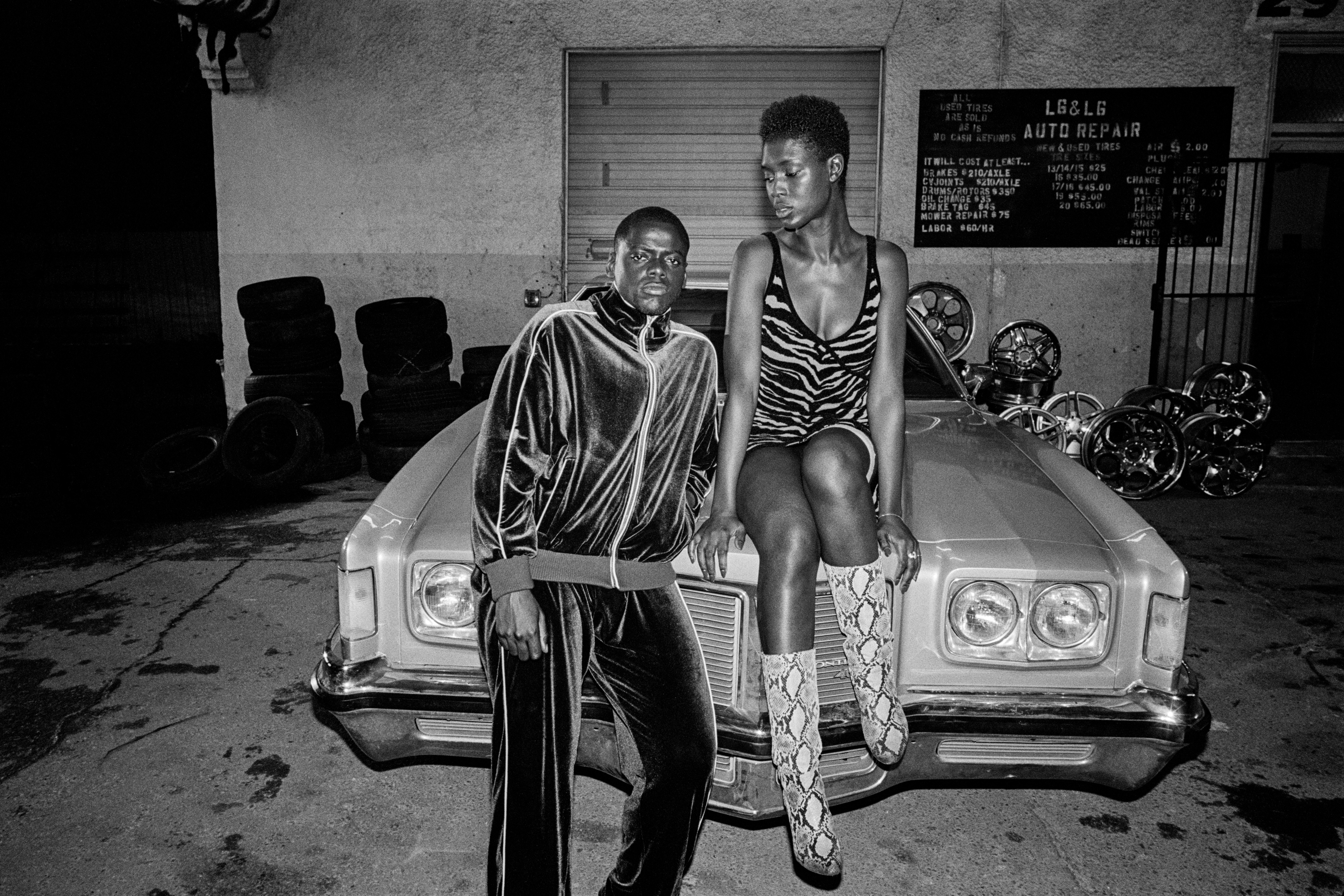 This article contains mild spoilers for the movie Queen & Slim.

Melina Matsoukas has directed some of the most influential music videos of the past decade. She placed Beyoncé atop a flooded car in “Formation” and built heaven and dystopia in Rihanna’s “We Found Love.” She introduced Lady Gaga’s zany theatricality to the world in “Just Dance.” Through her many conceptually ambitious and uniquely stylized works, Matsoukas shifted the modern ambition and aesthetic of the music video, bringing it closer to those of a feature film.

So it’s no surprise that her directorial feature debut, Queen & Slim, is deeply indebted to music. The film has been called a modern-day Bonnie & Clyde: it follows the two eponymous characters (played by Jodie Turner-Smith and Daniel Kaluuya) who flee south after Slim kills a police officer in self-defense. The pair spends much of their time alone on the road—but according to Matsoukas, music “becomes another character on their journey.” It seeps out of car radios, New Orleans homes and Mississippi juke joints, serving as a romantic spark, a chaotic agent and a soothing balm.

Matsoukas’ musical ambitions for the film, however, went beyond simply providing aural backdrops. She hoped to connect Queen & Slim with a history of black protest music; to pay homage to her favorite soundtracks while also giving a platform to rising black musicians. The result is an astounding collage of sound: the movie is packed with old and young talent, from Lauryn Hill to Roy Ayers to Lil Baby, and also propelled forward by a haunting score written and performed by Devonté Hynes.

Putting all of these pieces together was a disorderly and multilayered process, full of frantic creative bursts, missed deadlines, countless revisions and contributions from some of the biggest names in the music world. Here’s how Matsoukas and her team created an ode to the past, present and future of black music.

‘I wanted to show our roots’

Black music was a key component of Queen & Slim from the start. When Matsoukas read Lena Waithe’s script—based off an original idea by James Frey—it already contained a scene in which Queen and Slim argue over Luther Vandross, as well one in which Slim listens to gospel music in order to calm down. Music was going to inform the differences between their characters—and eventually provide a bridge for them to fall in love.

But many of the musical cues were unspecified, and Matsoukas hoped to fill them in with pinpoint zeal in order to create a classic soundtrack like the ones that she and Waithe grew up with—from movies like Love Jones, Love & Basketball and The Nutty Professor, which were filled with elite artists of their eras. “We wanted to bring the soundtrack back,” Matsoukas said. “I wanted to introduce the new generation to a lot of older black artists; to honor the legacy of black music and the diversity within it, and to show our roots and the blues and soul music up to now.”

It was also important that the songs reflect the geographical journey of Queen and Slim as they travel south. So in a moment in which the pair settles into their southern surroundings and regains some of their swagger, she inserted Mike Jones’ Texas anthem “Still Tippin’.” When they stop at a Mississippi juke joint for their second date, the renowned bluesman Little Freddie King is there to perform, representing a much older black tradition.

Matsoukas followed her own instincts for some choices, but she also turned to high-profile friends for guidance—including her close friend and collaborator, Solange. (Matsoukas directed the music videos for Solange’s “Losing You” and “I Decided.”) “I trust her musical taste immensely,” Matsoukas said. Several of Solange’s suggestions ended up in the film: Herbie Hancock’s “Come Running To Me” sets the tone for the black-owned diner where Queen and Slim first meet, while Roy Ayers’ “Searching” lulls Queen to sleep in the car.

‘We’re trying to continue the legacy’

As Matsoukas looked into the past, she also was intent on reflecting a new, politically-active black vanguard. “We talk about this film as a commentary on the black experience in which we live today,” Matsoukas says. “We’re trying to continue the legacy of those that have used their art as activism in the past: people like Nina Simone, Fela Kuti, James Brown, Public Enemy.”

To find the new wave of artists, Matsoukas cut a deal with Ethiopia Habtemariam, the president of Motown Records. The partnership was natural: the pair have been friends for years, and Motown has a storied history of championing black protest music since the 1960s. Motown’s current relationship with the dominant Atlanta label Quality Control Music would also allow Matsoukas to access some of the biggest names in hip-hop today.

Matsoukas and Habtemariam assembled a scouting team that included Fam Udeorji, Childish Gambino’s manager, and Kier Lehman, the music supervisor of Issa Rae’s HBO series Insecure. Together, they worked to identify artists that they felt would be appropriate for various scenes in the film, and asked them to write new songs in response to clips. To put even more pressure on the artists, they were only given two weeks to watch, write and record. “Oh my god, it was a quick turnaround, Habtemariam tells TIME, laughing. “I don’t think that’s normal.”

Despite the challenges, the contributions rolled in: “As people learned about the film, there was no artist that didn’t want to be a part of it,” Habtemariam says. Megan Thee Stallion collaborated with New Orleans bounce artist VickeeLo on the authoritative “Ride Or Die.” The rappers Vince Staples and Earthgang and the singers Syd and Moses Sumney, all of whom have grappled with injustice in their music, all sent in songs. Even Lil Baby, the popular Atlanta rapper who has so far mostly dealt in machismo, was inspired to deliver an introspective song about injustice: “I’ll let you decide or come up with some repeated lies/ I’m just tired of my kind gotta be the one to die,” he sings dejectedly on “Catch the Sun.”

One of the last songs to arrive was perhaps the most pivotal. Matsoukas had been in touch with Lauryn Hill, who expressed interest in writing for the film and even shared a demo of a song she had been playing live for years, “Guarding the Gates.” But Hill is notorious for taking her time—she hadn’t released new music since 2014—and the filmmakers weren’t holding their collective breath.

“Melina was in editing and finalizing the film—and probably three days after her deadline, Ms. Hill sent in this beautiful record,” Habtemariam says. “I think it’s a testament to her respect for Melina and Lena to allow to allow this soundtrack to be the vessel for the first new music from her in over five years.”

‘Who would be our current Quincy Jones?’

As Matsoukas filled out the film’s soundtrack, she also searched for the perfect fit for a score composer. “I wanted a black composer that could live between classical, hip-hop, and pop that’s current,” Matsoukas says. “I was like, ‘Who would be our current Quincy Jones?’”

When Matsoukas turned to Solange for advice on this nearly impossible task, Solange suggested her frequent collaborator Dev Hynes, the prolific British musician who records as Blood Orange. Matsoukas sent him an early cut of the movie, which he watched twice and then immediately agreed to score. “It was intense—it was a lot to take in,” Hynes says of his viewing experience. “I thought it was a really important movie.”

Hynes began composing to “seconds and moments” of the film, working to incorporate elements from a disparate set of influences that included Debussy, Alice and John Coltrane, and Coleridge-Taylor Perkinson. (He also had several conversations with Daniel Lopatin, also known as Oneohtrix Point Never, who composed the soundtracks to the Safdie brothers’ Good Time and Uncut Gems.) Hynes hoped to weave Blood Orange’s R&B-oriented synth and drum sounds with more traditional scoring tropes like tense string arrangements and disconcerting harmonies. “I don’t want to say I treated it like a horror film, but there’s horror in the film. That was something I kept thinking about,” Hynes says.

Hynes was also aware of the diegetic music inside the film, and worked to integrate his score with the songs Queen and Slim listened to on the radio: “There are certain times where I intentionally shift into the same key as the next piece of music,” he says.

All of these elements coalesced in his piece “Runnin’ Away,” which plays during a climactic split scene in which a violent anti-police protest breaks out while Queen and Slim have sex for the first time. It’s a jarring and tonally-fragmented moment of the film, and Hynes says that he went through many drafts before Matsoukas was satisfied with the result. Eventually, Matsoukas gave Hynes the idea to sample The Pharcyde’s 1995 song “Runnin’,” which she had been trying to place in the movie but couldn’t find a spot for. Hynes mixed the song’s chorus into his own piano playing, cyclical bursts from saxophonist Jason Arce and anguished vocalizing from Ian Isiah; the parts build in a stressful stream-of-consciousness of waves and shards. “It’s one of the hardest, most intense pieces of music I’ve ever worked on,” Hynes says.

“Runnin’ Away” sounds nothing like “Still Tippin’” blasting out of car speakers; “Still Tippin’” sounds nothing like Little Freddie King’s bluesy guitar licks. But for Matsoukas, all these elements represent the diversity and depth of black musical creativity; they are all songs that Queen and Slim might have encountered over the years, and clung to for motivation or solace. And she hopes that the Queen & Slim soundtrack will join those touchstones to become a part of the black experience for years to come. “I hope people will appreciate it for generations,” she says, “Just like the soundtracks that I grew up on, that really influenced my musical and cinematic taste.”