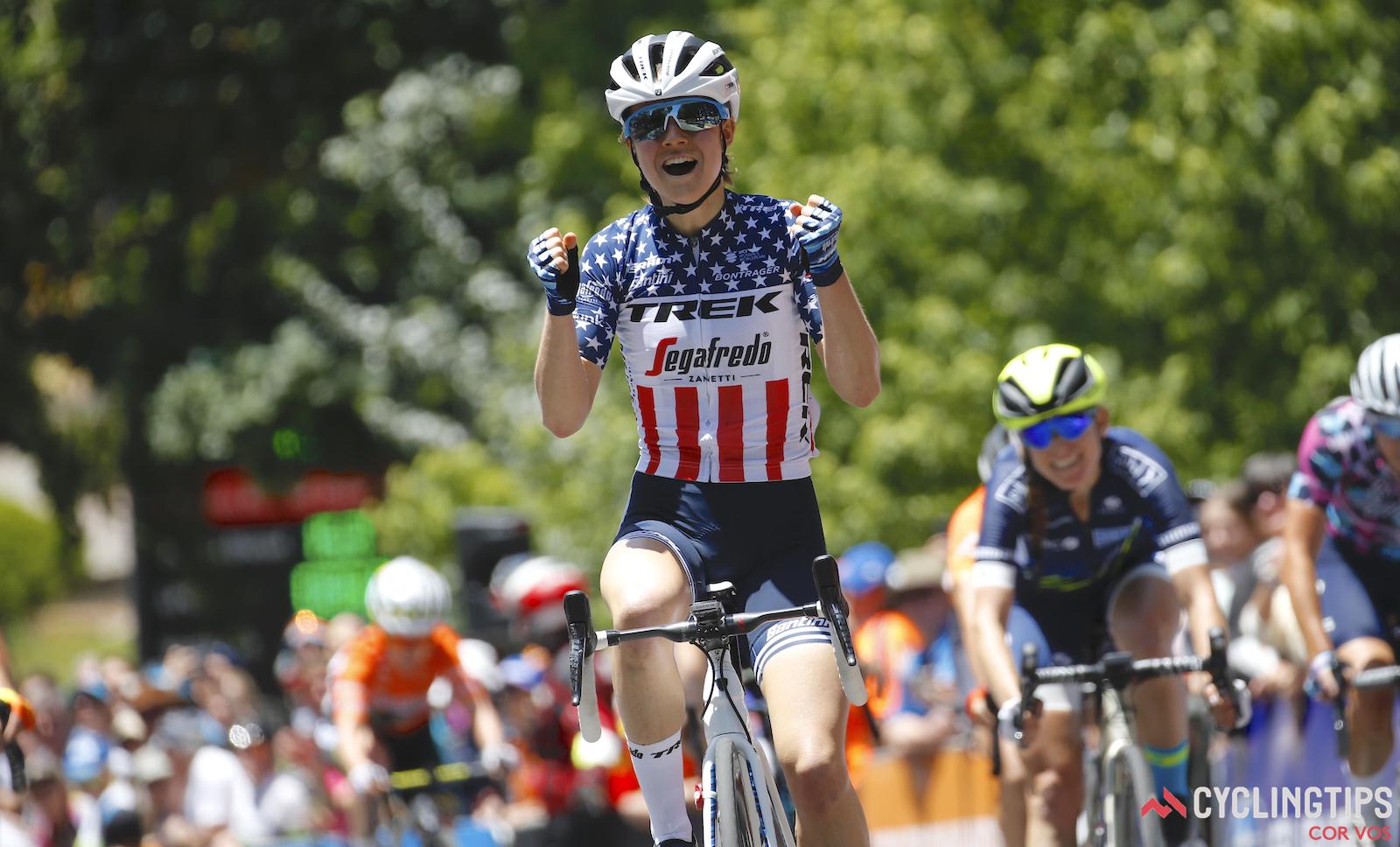 She was right on all three counts.

On today’s stage 3 into Stirling, in a tough uphill sprint, Winder punched away from a heavily reduced peloton, across the finish line, and into the ochre leader’s jersey.

We have a new race leader!

It was the second time in the stage Winder had led the bunch across the finish line in Stirling. At 35 km to go, at the second intermediate sprint, she’d kicked hard to beat Spratt. It cost her some energy but ultimately brought her one second closer to Spratt’s overall lead — from four seconds adrift to three.

The American champion was clearly keen to take time wherever possible.

“We were hoping for a somewhat aggressive race — that really suits us and the style of riders that we have on our team,” said Winder, who finished second into Stirling last year. “We knew it was a really hard finishing circuit, so setting myself up well to go for the bonus sprints was really important. And [I] didn’t want to kill myself totally for that because it is such a hard finale but I managed to just take it [the intermediate sprint].”

The bunch thinned down considerably after that sprint, as the riders battled their way around another two laps of the Stirling circuit. Leigh-Anne Ganzer (Rally) took a flyer with 12 km to go and looked briefly like she might hold on, but with Sunweb, Trek-Segafredo and Mitchelton-Scott all chasing hard, the American was destined to be caught.

Meanwhile, in the ever-thinning peloton, Winder was biding her time and giving instructions.

“My teammate Tayler Wiles had been trying to set a good pace at the base of the climb, with like seven, eight k’s to go,” she said. “And then also Lucy Kennedy from Mitchelton-Scott had been setting a pretty hard pace, which kept it kind of strung out up the climb. And then on the descent Taylor was really good.

“I was just right behind her and she was just listening to everything I had to tell her and just not to go too soon. She just set me up really well.”

Wiles ensured that Winder was well positioned when the tough uphill sprint began.

“I saw 300 meters to go and I was like, ‘Do not go yet, Ruth!’” Winder said. “And then I looked up and saw the finish line and I was like ‘now or never’, because I feel like once you get ahead and you just get some motivation for that, it’s a little bit easier than if someone jumps first.”

Winder held her lead to the line. German youngster Liane Lippert (Sunweb) backed up her third place from yesterday with an impressive second place. Lauren Stephens (Tibco) sailed through for third.

Winder leads the dash for the line as Lippert (right) and Stephens (centre-left) battle for the podium.

It’s been an impressive tour for Trek-Segafredo. Lotta Henttala was second on the opening stage, Winder was second on stage 2, and today they didn’t just achieve their pre-race goal of a stage win, they exceeded all expectations.

“We knew this [stage finish] suits Ruth from last year, but I mean, now winning the stage and taking over the leader’s jersey?” said sports director Ina-Yoko Teutenberg. “I mean, it’s really hard to beat, especially against a strong Mitchelton team. Like Amanda [Spratt], knowing how much she wants to win this race — I think that it’s just really amazing.”

For Spratt, losing the ochre jersey is cause for obvious disappointment. But that feeling is tempered somewhat by the knowledge that she and her team did all they could.

“Honestly I don’t know we could have done too much more,” Spratt said. “We had a good plan and the girls committed 100%. It all came down to the end to that final sprint.

“I was behind Arlenis Sierra and the sprint started to open up and she started dropping the wheel. So I had to go around her. Then I was maybe positioned third or fourth wheel before we got to that final kick and that’s when Ruth went and my legs just kind of exploded.

“I mean, I finished totally empty — I couldn’t have given anything more.”

While Mitchelton-Scott dominated yesterday, and while they looked strong throughout today’s stage, they lacked numbers towards the end. With 15 km to go, with the bunch thinned to around 30 riders, Spratt had just Lucy Kennedy for company — a far cry from the team’s three in the leading five 24 hours earlier.

In the end, Spratt found herself out of position in a key moment.

“I was a little bit far back, a couple of k out,” Spratt said. “I used some energy to get up [towards the front] but even so, I think you saw how punchy Ruth was in the finish there. She had a really, really incredible ride.”

Spratt crossed the line in 10th, well outside the time bonuses. It would seem that, after three straight overall victories, Spratt’s impressive reign at the Women’s Tour Down Under is over.

Tough day out. Proud of the way the team rode fighting to keep the Ochre Jersey but my legs just didn’t have enough in the end. Of course I’m really disappointed I couldn’t keep it for my team but big kudos to @RuthWinder and @TrekSegafredo for the classy win. https://t.co/ALDAq2lMHh

With one stage remaining Winder sits seven seconds clear atop the general classification. Lippert sits in second while Spratt is third, also at seven seconds (the total of Lippert’s stage placings is lower than Spratt’s).

At just 42.5 km, tomorrow’s circuit race around Adelaide will be a rapid affair. It should end in a bunch sprint, but with three intermediate sprints offering time bonuses (three, two and one seconds), and more time available at the finish (10, six and four seconds) there’s still room for movement on GC.

Spratt might be tempted to seek out some time — a single second over Lippert will move the Australian into second. Lippert and her Sunweb team will surely feature too, not just in the battle to hold (or perhaps improve?) Lippert’s GC position, but with a potential stage win on offer for sprinter Leah Kirchmann.

And Trek-Segafredo will surely play a starring role. They won’t just be looking for the stage win with Finnish sprinter Lotta Henttala; they’ll also need to fight for time bonuses throughout, to prevent others from unseating Winder.

In all likelihood, Winder will win the 2020 Women’s Santos Tour Down Under. But with her lead just seven seconds, and with 38 bonus seconds available throughout tomorrow’s stage, you just never know.

The post How Ruth Winder dethroned Amanda Spratt to lead the Women’s Tour Down Under appeared first on CyclingTips.