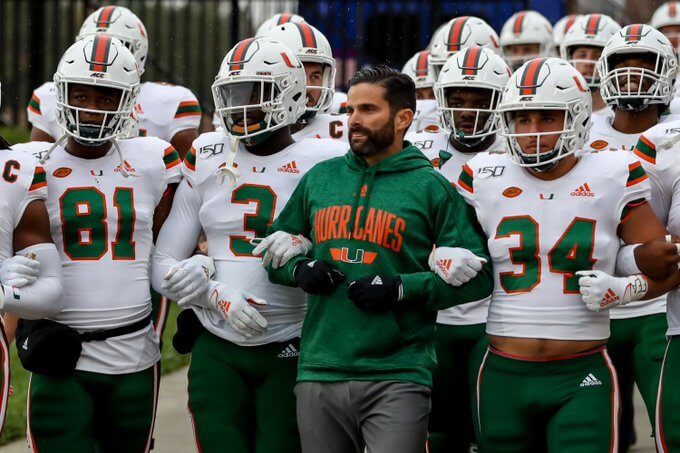 Miami (FL) is a 6.5-point favorite against Louisiana Tech in the Independence Bowl December 26
The Hurricanes were 6-4 before dropping their last two games to Florida International and Duke
The Bulldogs are vying for their first 10-win season in program history

The Miami (FL) Hurricanes are 6.5-point favorites against the Louisiana Tech Bulldogs in the Independence Bowl, which is set for a 4:00 pm EST kickoff December 26. The Hurricanes were 6-4 before dropping their last two games to Florida International and Duke. Meanwhile, the Bulldogs are vying for their first 10-win season in program history.

Upon further review of the Louisiana Tech vs Miami (FL) odds, there are several plays I like. Can the ‘Canes rebound from a disappointing finish to the season with a victory? Will La Tech make it six bowl wins in a row under Skip Holtz? Let’s dive in and analyze the Independence Bowl.

Am I Missing Something?

When you look at the data, trends, and intangibles, you might figure Louisiana Tech would be the near-touchdown favorite in Shreveport on the day after Christmas. First of all, it’s a virtual home game.

Also, the Bulldogs feature an offense that put up over 445 yards of total offense per game in 2019, good for 30th-best in the NCAA. Holtz has it going in Ruston, winning five straight bowl games. And there’s that motivation factor: the program’s first 10-win season is on the line here. All these factors have me leaning toward Louisiana Tech.

2020 UEFA Champions League Odds TrackerRead More
‘Cane They Do It?

On the flip side, Miami will be motivated too. Closing out the 2019 campaign with losses to FIU and Duke wasn’t a good look for a team that beat then-No. 20 Virginia and had bigger bowl aspirations. That win against the Cavaliers was clearly the highlight of the season.

Manny Diaz’s crew has a strong defense which was on display in the 17-9 win over UVa. The ‘Canes rank No. 13 in total defense, allowing opponents just under 308 yards per game. It’s also important to note that in their six losses, five have come by one possession or less (including one in overtime). The once-proud program might rally.

Smith is a Difference-Maker

At the end of the day though, I’m fading the Hurricanes because of two words: J’Mar Smith. After being suspended two games for violating athletic department policy, La Tech’s senior signal-caller returned with a vengeance against UTSA to close out the regular season, going 25-of-35 for 331 yards and three touchdowns through the air.

The Bulldogs are 9-1 this season with Smith under center (and 24-13 overall with Smith as the starting quarterback)  and average over 277 yards per game passing, good for No. 31  in the NCAA ranks. Oh, and he was named the Conference USA Offensive Player of the Year.

Bowl games often boil down to which team wants it more. Louisiana Tech is a program that has proven it loves the bowl experience. Miami (FL) has proven to be the opposite, dropping eight of its last nine (including a 35-3 embarrassment in the Pinstripe Bowl against Wisconsin). I’m all over the Bulldogs in this spot. The over is a solid play too, but take the points and bet La Tech to get that double-digit win total and make a little program history in the process.