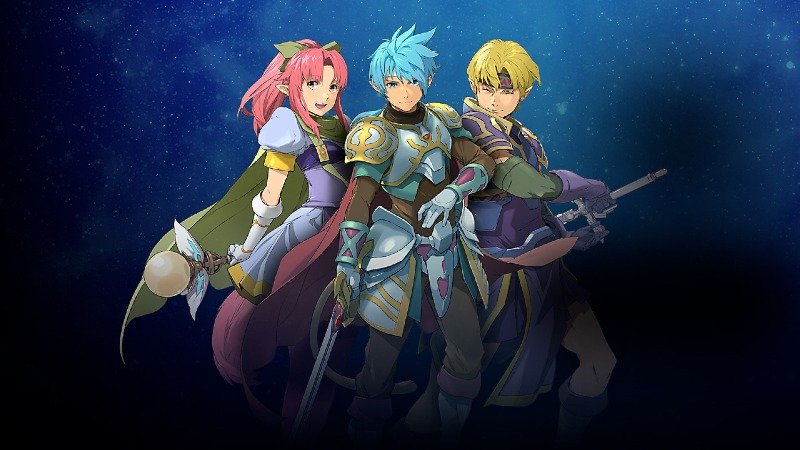 The original Star Ocean is back, once again! Star Ocean, (formerly) Enix’s sci-fi action RPG series, never made it to North America in its original 1996 Super Famicom form. But roughly ten years later, the first game would appear on the PSP as Star Ocean: First Departure. This year, Square Enix is bringing that version to modern platforms as Star Ocean First Departure R. While this port is largely based on the PSP version, which had new art from Production I.G., Square Enix brought on freelance artist Katsumi Enami to provide new character design work.

Enami, who has made his name doing art for series like Baccano! eventually landed a gig with Square Enix for Star Ocean: The Last Hope. As part of the series’ DNA, Enami also contributed illustrations for mobile game Star Ocean Anamnesis. A fan of the series himself, Enami has found himself in the position of not only putting hands on the original game but also on character designs he didn’t create.

We got the chance to shoot Enami some questions, and as the resident PlayStation Lifestyle JRPG Nerdface, I was glad to take on the opportunity. As always I’m curious about the process, but I also wanted to get a video game artist’s perspective on ownership. Any IP-based project like this can seem like mercenary work in some ways, and as a writer, I often wonder if artists struggle with validation when illustrating for properties they don’t have true control over. Enami’s answer was fascinating and helped me develop a more rounded perspective on this workspace.

Also, the other questions are pretty good too. Please read them!

PSLS: Were you familiar with Star Ocean before you were professionally involved with it? If so, what does the series mean to you?

Katsumi Enami: At the time of Star Ocean’s original release, I spent my days delving into games, so I had played the title as well. Thereafter, I left the video game company I had been working for to become an illustrator, and never in my wildest dreams did I think that I would be involved in the series with my work on Star Ocean: The Last Hope. This title also served as an impetus for many people coming to know me as a character designer on games, so personally, it’s also an important title that I hold close to my heart.

PSLS: What would you say stands out the most about Star Ocean when it comes to how the characters are created or designed?

Enami: It depends on the content of the game, but perhaps I’d say the fact that fantasy and sci-fi elements are always intermixed across the series, but that each individual game has its own unique designs that suit that particular title.

PSLS: How does doing design work for video games differ from other mediums, if at all?

Enami: Nowadays, unlike the past, games are not so different from videos, so I don’t think there’s much of a difference in the design work required for both mediums. That said, in games, sometimes we need to emphasize (perhaps even over-emphasize) the character’s unique qualities in consideration of the game’s specifications.

PSLS: When creating art for characters that aren’t your intellectual property, how would you describe your sense of ownership for that work, if any?

Enami: For illustrators, I think the majority of work entails just that, but even so, seeing a character you have personally designed move and speak is one of the joys of this work, and also builds quite a sense of attachment. If a project I am involved with becomes famous, I consider it to also be an evaluation of myself, and for someone who makes a living out of this profession, opening new opportunities for yourself is one objective, so there’s quite a sense of ownership there.

PSLS: Are there any unique challenges associated with illustrating characters for an update of a previous work, as is the case with Star Ocean: First Departure R?

Enami: There are quite a few challenges and pressure associated with finding a blend that would be considered acceptable to fans to maintain the image a title has built over the years while also incorporating my own style, which was the reason I was asked to come on board as the illustrator in the first place.

PSLS: Do you have any practices or routines when doing illustration work that help you focus and achieve your desired quality?

Enami: Nothing in particular, but I always have a movie or anime that I like from a visual standpoint continuously playing in the background while I work. My focus doesn’t last very long, so a quick glance at an anime or video I enjoy helps revive my motivation.

PSLS: Do you have any advice for aspiring artists?

Enami: If you intend on making this a profession, I think it’s important to have the desire to draw something that brings joy to others, in addition to knowing what you want to draw.

I feel like if you can enjoy artwork in the same way that consumers viewing it do and can also understand why that artwork is desired/in demand and enjoy drawing that subject matter yourself, then you could make this a lasting profession for yourself.

PSLS: What’s your favorite part of working on video games, and is that different compared to working on other mediums?

Enami: It’s close to anime, but I think it comes down to how enjoyable it is to see the characters you design move and speak. Moreover, you can control the characters in video games, so from an illustrator’s standpoint, perhaps it may even be more enjoyable than anime.

Thank you to Katsumi Enami for taking the time to answer our questions!