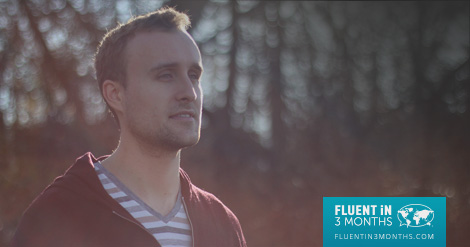 “Everything that seems impossible now will seem trivial with enough patience and practice. Don’t give up.” – Scott H. Young
As a slow-cook learner, I’m fascinated by people who take the bullet train to language learning. That’s why I was intrigued to peer inside the mind of Scott H. Young.

Scott rose to autodidact stardom when he learned MIT’s 4-year computer science curriculum in less than twelve months. Next he taught himself four new languages in a year. He speaks English, Spanish, Mandarin Chinese, French, Portuguese, Korean and some Macedonian.

Such extreme self-improvement projects may seem outside the realm of most of our capabilities, but Scott believes that the principles and methods that he and other ultralearners employ are essential tools for anyone who wants a competitive edge in the fast-changing, aggressive workplace.

In his book ULTRALEARNING: Master Hard Skills, Outsmart the Competition, and Accelerate Your Career, Scott shares how basic strategies that he and other ultralearners embrace can give anyone the edge in organizing and executing a plan to learn something new deeply and quickly—and without teachers or tuition.

You can learn more about Scott and his ultralearning tips on his website. Let’s dive in and find out the language learning secrets of a fella who learned four languages in 12 months.

Scott chatting in Spanish with Benny Lewis, founder of Fluent in 3 Months.
Language Mentors: Learn a New Language in 90 Days
Language Mentors is our popular series where we interview polyglots, language teachers, language learners and even folks from outside the field of language learning. We’re getting straight to the point, asking for their top tips on language acquisition, steadfast motivation, and rapid learning.

We want to give you the inside scoop on what it takes to learn a new language, fast (in as little as 90 days).

We’ve actually seen hundreds of people learn a new language to conversational level in just 90 days. You can do it too by putting what you learn from our Language Mentors into practice.

And if you need extra support, then join us in the Fluent in 3 Months Challenge where you’ll make lots of new friends who share your goal of learning a new language fast (plus you’ll have a 15-minute conversation in your new language after 90 days — we guarantee it).

Read on to learn some of Scott’s language learning hacks. And get to know some fun facts about a creative polyglot at the same time.
The goal of the Fluent in 3 Months Challenge is to have a 15-minute conversation in a new target language in 90 days. What are the top three activities you would advise to accomplish this goal?

Find a good tutor online through italki.com or another service. Set up intro lessons with 3-5 people and pick the person you feel the most comfortable with. Having a good person to practice with is essential, and if you enjoy chatting with someone and feel supported it can go a lot further than just 15 minutes.
Learn how to pronounce the language when you see it written down, romanized if necessary for languages where reading the alphabet/symbols are difficult. This will allow you to use Google Translate and dictionaries to fill gaps in your understanding.
Write out 10-20 sentences that you’d like to be able to actually say. This should be enough with Google Translate to have your conversation a lot earlier than ninety days, if you’re willing to take it super slow and be okay with pausing while you look things up. Good sentences are introductions, a few questions, “where do you live?” “what is your work?” and a few common answers in the affirmative. Realistically, if you’re prepared to take it slow, this can probably be done after a few hours of prep. Then you can use that foothold to figure out what sentences and words you need that you don’t already know, which can be better than trying to memorize vocabulary from a list.

What’s your favorite place for studying a new language?

If we’re talking about studying, with a book, app or course, then I like going to the coffee shop to study.
A great thing to do is to practice with people during your daily life. If you do get the opportunity to travel to learn a language, you can use it everywhere.
I highly recommend finding a partner who will practice with you (they don’t need to be a native speaker) and then you can try chatting to each other while you do other, fun things. This will give you exposure to more vocabulary and situations than you would if you just sat in a room all day.

Scott practises his Chinese over lunch.
Your best memories of a language win?
Going on dates in Spain and giving a live talk to a room full of reporters in Beijing would definitely be up there. I can also remember arriving in Seoul and checking in with the caretaker at our Korean dormitory, struggling to communicate in Korean (she didn’t know any English). It was only after a couple of months that I learned enough to talk to her that I realized she was actually born in the Korean part of China, and knew Mandarin fluently, which we could have used to talk to each other except neither of us thought the other could speak it!
What are your favorite activities to do in one of your target languages?
Skype conversations are one of my favorites, just because it gives me a glimpse into what’s happening in other parts of the world without having to travel. It always feels a bit like a vacation to hear about what’s happening in Korea or Brazil over the computer. Otherwise, I like going to restaurants, hanging out and watching movies.

Scott during a lesson with his Chinese tutor.
What are the top three roadblocks you see learners face?

Fear is the biggest one. It’s really difficult at first to face down the awkwardness of suddenly losing all of your language abilities. Add to this that some people can be discouraging when you try to speak and it can really psych people out. I think if you can overcome the fear it can make a big difference in your learning progress.
The second problem is insufficient opportunities to use the language. This isn’t an issue if you travel to a place that speaks it, but it can plague at-home learners because using the language is rarely “necessary” and it’s often not efficient for a communication situation in the beginning.
A final problem is that some languages have a large set of cultural and linguistic knowledge that departs from English and it can make the memory burden of learning a new language more difficult.

And what are your tips for dealing with those roadblocks?
My favorite suggestion is simply to use the No-English rule, either completely (if you’re traveling) or for specific contexts. Yes, it does make it scary, but once you memorize the words for “I have a project where I’m trying not to speak English” and you tell that to people, the vast majority are supportive of you. This can be a little scary at first, but it’s much, much easier in the long-run because people adapt to you and then you get to practice all the time with less friction. If you can’t do it 100%, at least define it for certain situations. You and your spouse, for instance, could have a No-English rule at home, to practice a language, even if you use English for work or with other friends.

For the second problem, it’s all about creating opportunities to use your target language. I like Skype, because it’s convenient, but also language meetups since those tend to be fun and casual.

For the final problem, I suggest investing in applications like Anki to help you build up that foundation in the other language if you feel overwhelmed with the memory burdens.

Scott reading a Spanish book.
What are your favorite TV shows for practicing a language?
If I’m beginning a language, I really like to watch shows I’ve already watched in English dubbed into the language I’m learning. It takes a lot of the pressure off since you already know the plot, so you never get lost if you misunderstood something. I watched reruns of Star Trek: The Next Generation when learning Spanish. This can be harder in other languages (Chinese, for instance, rarely does dubbing unless it’s for children, so I ended up practicing on Dragonball Z).
What are the most challenging things you do in your target language?
Funny story, when I was in China, I was doing a bit of work with the publisher of my book there and I was going back from their offices to my AirBnB. They had gotten me the cab and were being quite protective of me (making sure I didn’t get lost or confused with things), so when I got a telephone call I immediately assumed it was someone from the office and after hearing a few sentences replied, “Yeah yeah, it’s okay, I’m almost home, don’t worry.” The person asked me to repeat, so I did, and after a bit of confused back and for the person said, “Wait are you a foreigner?” and I suddenly realized it wasn’t my publisher at all, but a telemarketer trying to sell me on mortgage payments! So yeah, phone calls can be tricky.

I would say movies and television are also difficult. I can converse, but then when I try to watch a movie it feels like everyone is mumbling all of a sudden.
What are your top three pearls of wisdom for language learners?

Speaking is a habit, the more you can make it automatic to use the language, the faster you’ll improve.
Everything that seems impossible now will seem trivial with enough patience and practice. Don’t give up.
Maintenance matters more in the long-run than learning. Find ways to keep practicing, long after you’re “done.”

What about You?
Which of Scott’s tips resonate most with you? We’d love to hear about it in the comments section.

A big thank you for Scott for sharing his thoughts and winning strategies with us.

To learn more about Scott, you can visit his website.

Want to learn a new language in 90 days? Come join us in the Fluent in 3 Months Challenge.