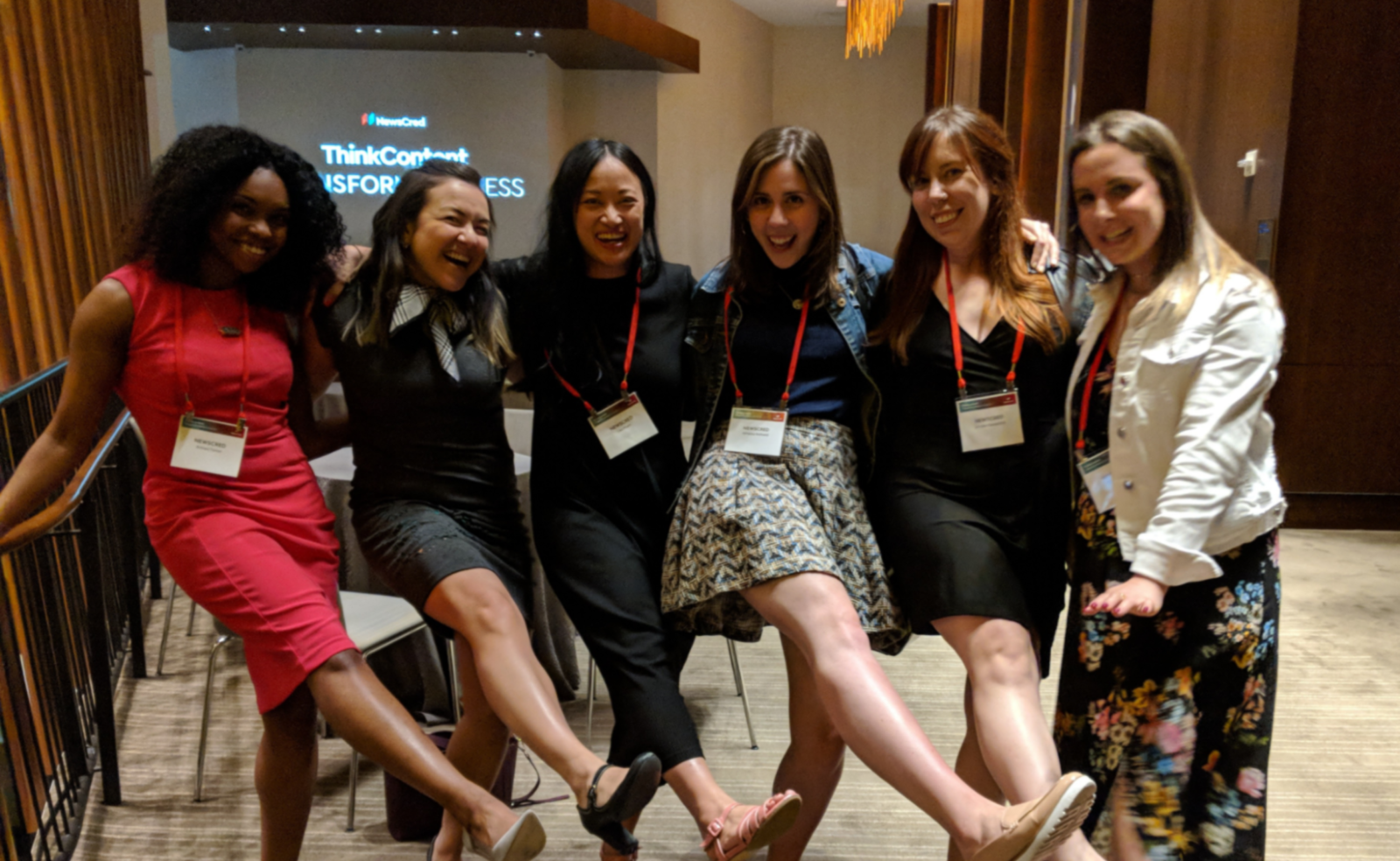 One of my first conversations at NewsCred was about pay equity.

I joined NewsCred in July 2016 as Head of People Operations and made a point of having a cup of coffee with every leader at the company to find out what they thought was great and what needed fixing. Our VP of Marketing and I took a walk through nearby Madison Square Park. She told me that everyone means well, but we might be paying some men and women different amounts for the same role. And if that were true, that was just plain wrong.

I brought this up to our CEO, Shafqat Islam. If you have ever met Shaf, you can predict his reaction. Shaf gets fired up about a lot of issues and regularly wears a “The Future is Female” t-shirt. NewsCred has strong values because Shaf has strong values. So he was shocked and frustrated, saying that he’d personally approved every salary and wouldn’t let that happen intentionally. He then quickly became motivated that if we had this problem, we couldn’t let it stand.

I walked away with two questions:

How could we actually figure out if we had a problem across the board? It’s not just a matter of averaging what men and women make and then compensating the lower party with the difference.
If we did have a problem, what should we do about it? I joined NewsCred because people here give a damn and want to make it a great place to work. Paying people fairly for their work is a pretty bedrock aspect of that.

The Causes of the Gender Pay Gap
Shaf, our COO Charles Hough, and our Head of Talent Acquisition Josh Graber started by exploring the causes of unintentional gender pay inequity, but it’s an odd situation to have a group of men trying to address pay inequity. We were particularly dependent on the research and insights shared by our incredible diversity council (particularly agile coach Cara Lemon). We definitely had blind spots. Here’s what we learned.

Startups live and die based on two things: their talent and the precious money they have left in the bank. Our (excellent!) recruiting team is charged with getting the best talent we can, at a price that the talent and the company will both be happy with. While we don’t focus on salary history in negotiation, our experience is that it often plays a role in setting the candidate’s own expectations of what they are “worth.” This is the first place where pay equity gaps can get imported into your company, without you yourself necessarily having bias. Statistically, a male recruit’s salary expectations are going to be significantly higher than a female recruit’s. If pay equity is not top of mind for hiring managers, then it becomes all too easy to let those expectations drive inequity.

Men then are more likely to push for a raise, in part because they statistically have a higher perception of the quality of their work. The organization’s leadership then evaluates that particular raise request in isolation, which means that more requests are being considered from men than women. And thus, even leaving aside any potential bias or nefarious intent, you can very easily get to a place where men and women are paid significantly different amounts for the same role.

Knowing all this information, we needed to set guard rails against the possibility of structural inequities. Note that if these things are true at NewsCred — which I think is on the high end of the people-focused spectrum — then they have to be much more so elsewhere. I think this is especially going to be true for startups, where processes may not be in place to catch you.
What We Did
The solution, we believe, is to ignore gender and pay everyone the right salary. That should take care of pay equity by itself (I’ll come back to this, as there’s one really important caveat). But then, of course, what is the right salary? To some extent the right salary is whatever everyone will be happy with. The problem with that is what I described above. If you’re not thinking systematically, then you can’t help but get it wrong.

To get the right salary, you need two things.

The first is data about what the market pays for a role. This is trickier than you’d imagine. Employees will sometimes come to you saying that they are underpaid because they have a friend who’s had a similar role at a Fortune 500 company for ten years and makes 50% more. But we’re not a Fortune 500 company, and don’t want to be. NewsCred’s competition for talent is other marketing tech startups in NYC that are around 150-200 people in size. You can easily move average salary by 20% or more by changing the company size, the vertical, the funding and annual revenue, or changing the role or required experience slightly.

We chose PayScale as our source of market data (and then do a sanity check) because of its flexibility, especially around some of the more hybrid roles that we have here. Inventing a new vertical means that you end up with some non-standard roles, like Content Strategist — a hybrid strategist/project manager/editor/superhero. We also set a goal of paying above our market (at the 75th percentile for most roles, 90th percentile for engineers) in order to take salary off the table as a major consideration for why we’d lose someone great.

The second thing you need is the right assessment of each employee’s skill. We believe absolutely in disproportionate rewards. Every team will have its newbies that require training and frequent check-ins, its solid performers that can be trusted to do great work autonomously, and the rare irreplaceable, super-productive 10xers that raise the bar and the culture. The goal is not to pay everyone equally but pay them appropriately according to their ability and performance.

At annual review time, before we’ve even begun to talk about salary, we gather ability information from managers, department heads, and our exec team. Gathering info from a large group minimizes bias, and we try to minimize groupthink by getting that info from people separately. Is there still potential to get this wrong? Yep. But we do our best and challenge our thinking by looking for dissenting voices on the consensus.

We then assemble a giant spreadsheet with everyone’s salary and all of the PayScale data to surface where people are not currently being paid according to their performance. One year is a long time at a startup like NewsCred. Even someone who was paid appropriately the previous year might have grown so much that they deserve a large raise or promotion now. We then sit down with this information and make the hard decisions about how to allocate our available dollars. If we’ve done our job, everyone is paid according to role, performance, and ability, and gender is not a factor.

We also make special effort to ensure that new people entering NewsCred don’t throw off internal pay equity. We have had cases where the salary we are ready to commit to with a new person is greatly higher or lower than someone in a similar role internally. We have some hard questions then. Is the new person significantly different in current ability? Has the market changed for the role and we should adjust the existing salaries internally (always up, never down)? Should we increase the salary beyond what the candidate thought was fair? Should we not make the offer? All of this takes judgement and serious consideration.

Can I guarantee that everyone at NewsCred feels they’ve gotten everything they want? No. There may be differences of opinion about performance (in which case we owe feedback) or what the right salary would be for particular performance (in which case we have to communicate what we can). But do I feel comfortable that we do our best towards this goal? Yes. And have our market corrections trended heavily towards women? Also yes.
Pay Equity Is Not Just About Pay Equity
I said before that there’s one big caveat where you can’t just ignore gender. That’s in the area of who is in what roles.

Our diversity council did an anonymous survey recently using the transparency and analytics company Pluto. Some of the data it analyzes is whether pay inequities exist, across multiple dimensions including not just gender but also race, background, education, and parental status. The data showed that the median salary for NewsCred women overall is still materially below the median salary for NewsCred men.

It was my turn to be shocked, frustrated, and ultimately motivated. Was this a selection issue with who responded to the survey? Were the responders giving biased data to fit a conclusion? And then when I’d found my bearings: How the heck could we do all this work and still so completely miss the mark?

We investigated further and found that we’d done the job I’d thought on pay equities for each role. But the Pluto finding was real. In the NewsCred US office, there is a non-insignificant difference in median salaries. The difference is explained almost entirely by greater proportion of men vs. women in specific functions. As such, comparing the aggregate is not truly apples to apple. However, it gives us motivation to make sure each functional area has equal representation. At NewsCred, for example, we have more male engineers than female. For our content strategists, it’s the opposite. If you take the aggregate median pay, you will find differences in some comparisons between groups. Thus, we still have work to do.

We are proud of what we’ve done so far. But if we want to be a company where the median salary for men and women is equal, recruiting is the key. We are a year into a major effort to increase the diversity of our pipeline, and it has already paid off in our engineering department. But there’s more to do. If you’re interested in being part of a company that works this hard and transparently towards equity, we have a number of roles open.

The post Lessons for Startups from NewsCred’s Battle with the Gender Pay Gap appeared first on Insights.