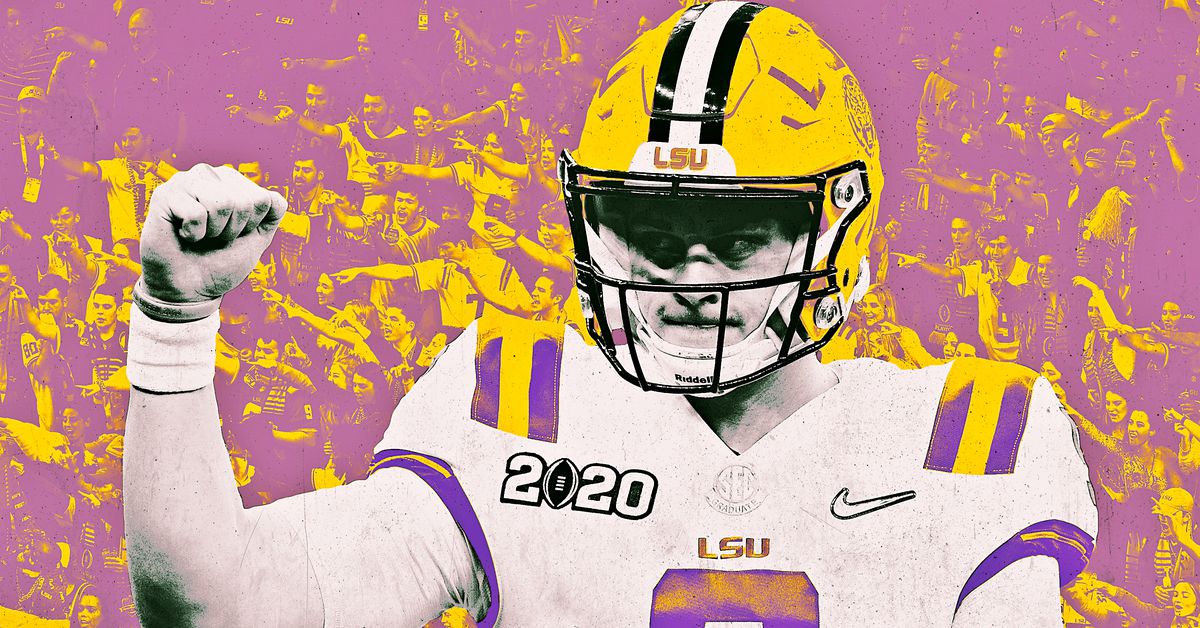 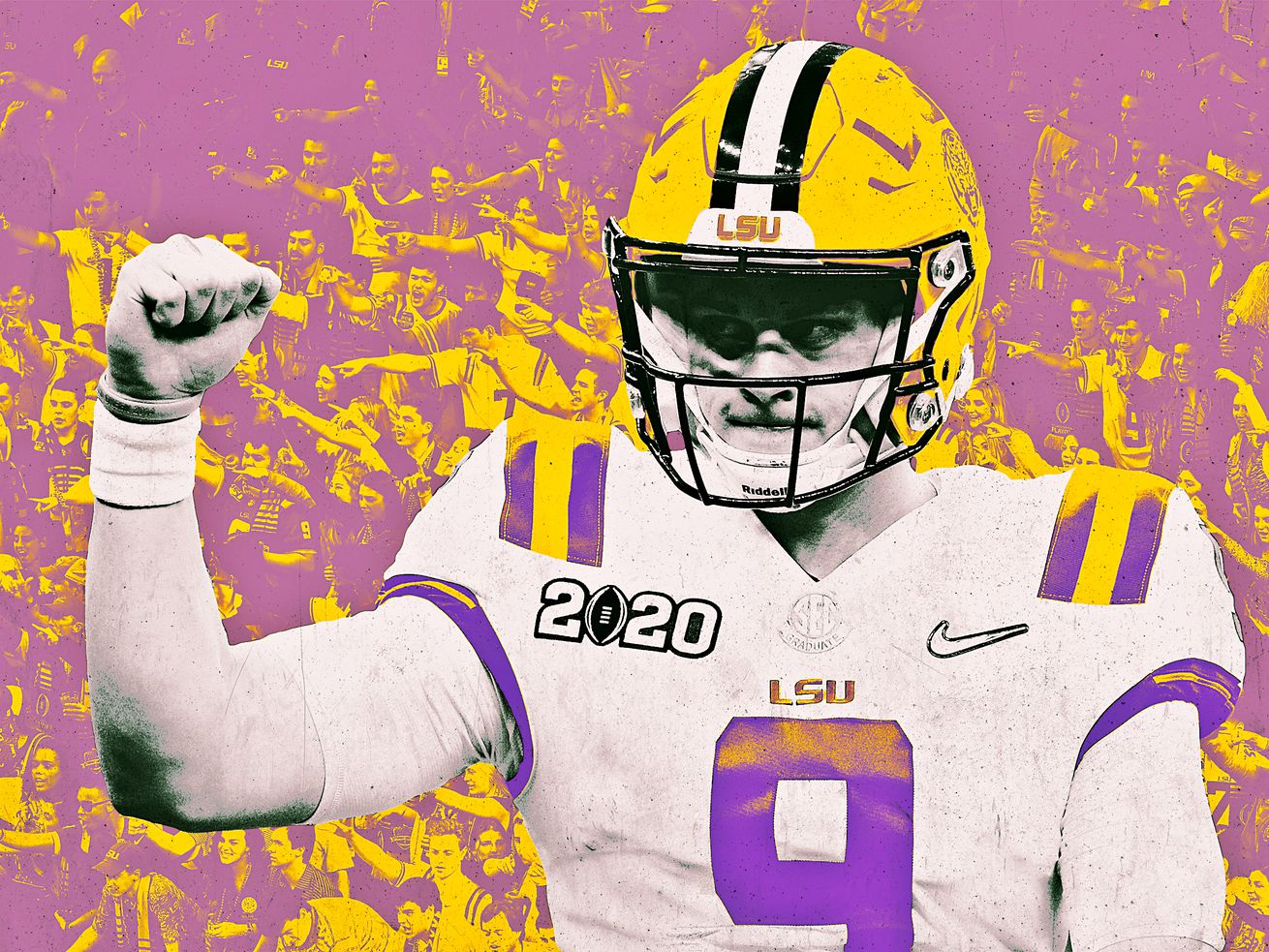 The Tigers quarterback won the Heisman Trophy, set the all-time single-season record in touchdown passes, and finished his career with a 15-0 record and a national championship

LSU’s dominant 42-25 victory over Clemson seemed unlikely in the early moments of Monday’s national championship game, but it made perfect sense given the long and winding road it took to reach it.

The Tigers overcame a slow start to take home a title thanks to a coach who became beloved for being continuously overlooked, and a quarterback who transferred halfway through his career after being consistently told by coaches he wasn’t good enough. Those two men—Ed Orgeron and Joe Burrow—combined to lead the Tigers on one of the best seasons in college football history. In Burrow’s case, it was one of the best individual seasons ever. One year after looking like every other quarterback to suit up in Baton Rouge for the past decade—mediocre, inaccurate, and undeserving of the receivers, running backs, and defenses on the roster—Burrow blossomed in 2019 and delivered the best statistical season for a passer of all time. He threw the most touchdowns, tied for the third-most passing yards, did it more efficiently than anyone before him, and won the Heisman Trophy. Not bad for a kid whose last head coach once said he threw “like a girl.”

Orgeron, passed over for the biggest jobs for so long, finally had his moment to shine. USC didn’t promote him to head coach because higher-ups reportedly disliked his voice. He wasn’t the first-choice candidate for his current position after steering LSU to stability in the wake of Les Miles’s firing. He was almost fired early in his own tenure when a group of unhappy boosters wanted his ouster. And now he’s the head coach of a 15-0 national champion, with one of the most dominant campaigns ever under his belt.

After Clemson barely escaped Ohio State in its semifinal, and LSU obliterated Oklahoma in theirs, common wisdom suggested the Tigers (the Louisiana ones; it’s confusing, I know) would do as they had all season and open a can of whoop-ass on all who dared to challenge them. But on Monday, the typically hot starts that have defined LSU’s games all season were replaced by futility.

Burrow looked lost early on, starting each of his first two drives in the shadow of his own end zone, and struggling to shake off a pestering Clemson pass rush—most notably from Isaiah Simmons. A big gain on his first play from scrimmage was negated by a penalty. His completions on his first three drives combined for 25 yards, his historically accurate arm seemed to have faltered, and LSU found itself in an early hole. But Clemson, which once held a 127-20 total yard advantage, could muster only seven points in its first four drives, opting to punt from LSU territory rather than trying for a field goal. Even when Clemson climbed out to a 17-7 lead—LSU’s first double-digit deficit of the season—it seemed as if it’d left too many points on the field. Those concerns soon proved true.

Burrow, who uncorked a 52-yard bomb to open the scoring for LSU, found Ja’Marr Chase for a big gain two drives later that set up another touchdown, and then found him once more on their next drive to pull ahead, 21-17. Minutes later, Burrow had tied former Hawaii quarterback Colt Brennan’s NCAA record for the most passing touchdowns in a season and LSU, once subdued by the insurgent Clemson, entered halftime with an 11-point lead. By game’s end, the margin would grow to 17. Burrow threw for five touchdowns for the sixth time this season, and this was in a game when you’d have been forgiven for thinking he just didn’t quite have his best stuff.

Before this season, asking 10 college football fans which quarterback they thought had the most dominant season in NCAA history would’ve probably resulted in 10 “Cam Newton” responses. What Burrow did in Baton Rouge this season surpassed even Newton’s lone year at Auburn in 2010. Burrow finished his season with more passing touchdowns and a higher passer rating in a season than anyone in history. He threw with more accuracy and for more yards in a single campaign than all but one other player before him. And he did so on almost 200 fewer attempts. His team was just the second to finish 15-0 after last year’s Clemson team, besting seven squads ranked in the top 10, and four in the top five at the time of the game. His margin of victory for the Heisman Trophy was the largest of all time, and he nearly broke O.J. Simpson’s record for the most first-place votes despite garnering those ballots from a pool of nearly 300 fewer voters.

Joe Burrow now with as many TD passes in 2019 as LSU had in the previous four seasons combined.

The improbability of Burrow’s evolution from caterpillar to butterfly in the past 24 months cannot be overstated. Last season—his first at LSU—he was fine, if unspectacular, throwing for 2,894 yards, 16 touchdowns, and five interceptions on 57.8 percent passing. Before that, in two years on the field at Ohio State, he completed just 29 passes for 287 yards and two scores—the latter two numbers he eclipsed in the first half against Clemson. He finished this season completing 76.2 percent of his passes for 5,671 yards, 60 touchdowns, and six interceptions. His 463 passing yards and six total touchdowns on Monday were the most in the history of a BCS or College Football Playoff title game. On the biggest stage, he delivered, just as he had all season.

Burrow’s career started in suburban Ohio, and now, with the closest any player has ever come to a perfect season behind him, it’s likely he’ll end up back there, as the Cincinnati Bengals’ selection to open April’s NFL draft. There will be combine measurements and pro days and comparisons to his SEC West compatriot Tua Tagovaiola, himself of enviable skill. But the truth is, Joe Burrow never really belonged in Ohio, the same way Ed Orgeron never belonged anywhere but Baton Rouge. He was born for Louisiana, and to be a Tiger. And with Monday’s coronation, after years of being doubted and overlooked, he’ll never have to be anything but.