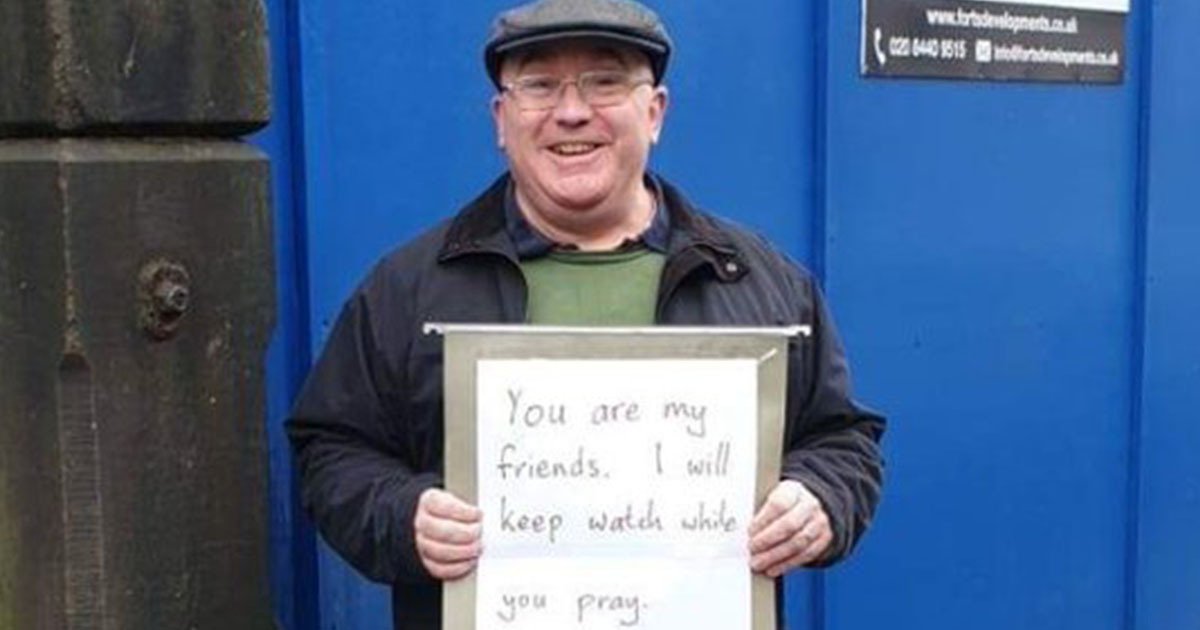 In the wake of the New Zealand terror attack which left 50 dead and 50 more wounded, messages of hope and love have abounded.

In particular, one man from Manchester took it upon himself to support the Muslim community in his local area by standing outside his local mosque to make those inside feel safe.

Andrew Graystone from Levenshulme, Manchester, stood outside the Madina mosque on Friday (March 15), shortly after hearing about the terror attacks in which two mosques were targeted in Christchurch, New Zealand.

What a beautiful gesture outside a Mosque in Manchester today!

His name is Andew Graystone, from Levenshulme, Manchester

The 57-year-old stood outside the mosque for the entirety of Friday prayers, holding a sign with a heartwarming handwritten message.

You are my friends. I will keep watch while you pray.

Graystone’s kind gesture soon went viral, with many thanking him for standing in solidarity with his local Muslim community at a time when they needed it the most.

A man outside a Mosque in Manchester, UK

With a sign that said "You are my friends. I will keep watch while you pray"

This mans was willing to be a human sheild so muslims can pray.

The 57-year-old told The Guardian about his motivation for standing outside the mosque, saying he wanted people to feel safe enough to attend prayers.

I thought, what would it feel like as a Muslim going to prayers today? I would feel a mixture of enmity and even fear.

I picked up a card, wrote my message, went down to my local mosque at Barlow Road and stood outside.

Graystone, who is a writer, soon went viral on social media after a picture of him smiling warmly began to circulate. With no one knowing the man’s name, his daughter soon identified him and said how proud she was of her dad.

Dear world. This is my Dad @AndrewGraystone and I am SO proud, in every way, to be his daughter! pic.twitter.com/N0YZx45MpS

The writer explained how initially, some worshippers were suspicious of him because of his handwritten sign and thought he might be there to cause trouble.

They thought I was a protester. But when they saw what was written on the board, people warmed to me.

Once prayers had finished, Graystone explained how ‘hundreds of people’ surrounded him, thanking him for his support and kindness.

So I was deeply honoured to meet @AndrewGraystone at the BBC who stood outside a Mosque on Friday in #manchester with this sign. I give him a hug, thanked him and made a friend. #OneLove #ChristchurchMosqueShooting #NewZealandTerroristAttack pic.twitter.com/M7hEwwVr8u

Unaware that the imam had commended his actions during the service, the 57-year-old couldn’t believe it when prayers ended and he was quickly surrounded by people thanking him.

When people came out, I was surrounded by hundreds of people. People were thanking me, blessing me. Some people said their faith in humanity was restored.

I have received around 100,000 messages in the last 24 hours – and hardly any negative messages. That shows the power of choosing friendship over fear.

It isn’t really about religion… It is about friendship and community – and you have to take the first step sometimes and build bridges.

The man’s actions have been praised by many, and for good reason. Now more than ever, we have to stand together in solidarity despite attempts to divide us.

If you’re concerned and need to contact a friend or relative please visit the International Committee of the Red Cross, who have set up a website by which you can restore links and register your own safety.

If you have a story you want to tell, send it to stories@unilad.co.uk.