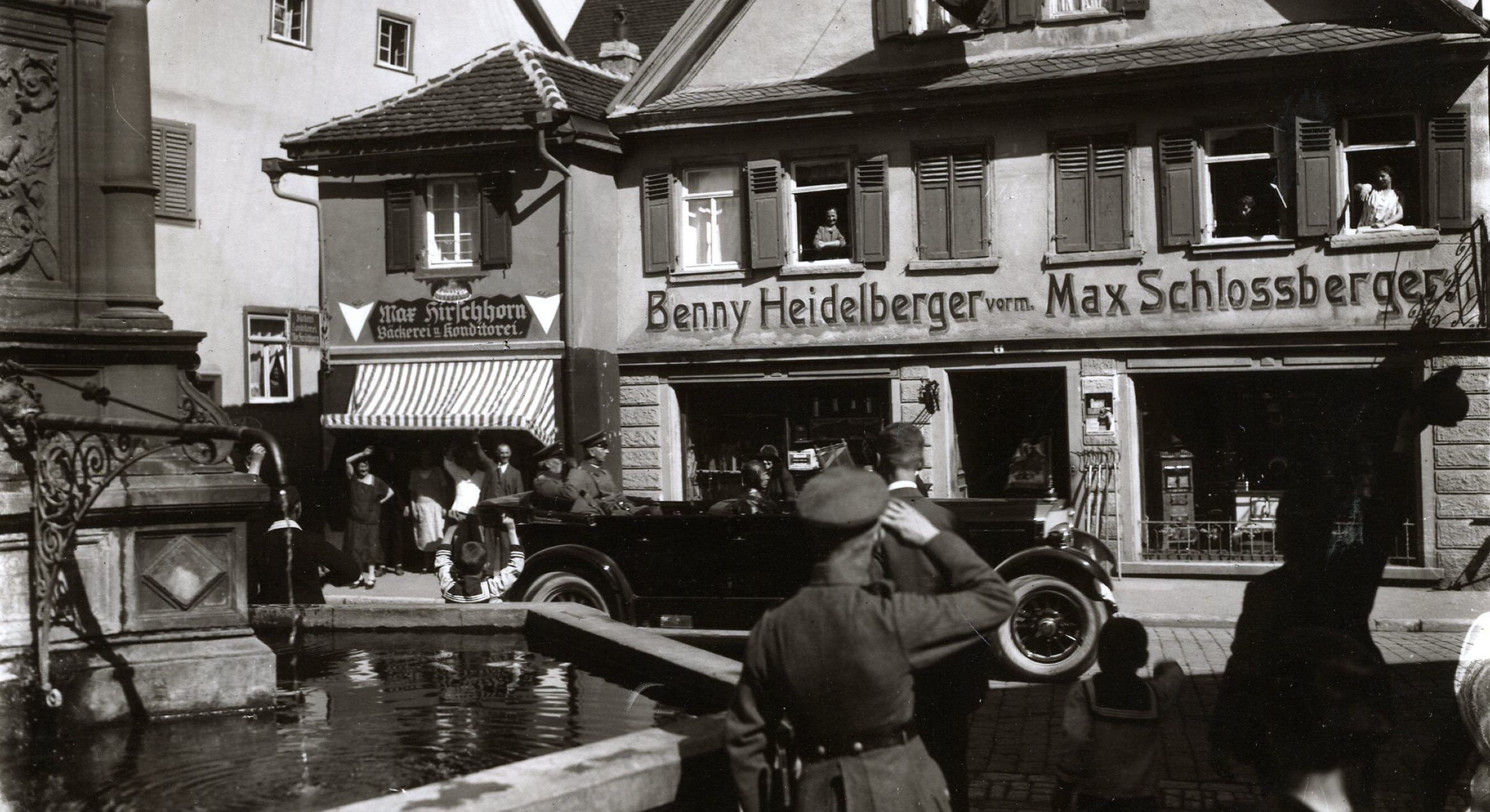 MyHeritage enables millions of users to discover their past and empower their future, and we have played a part in many incredible stories. Recently, a German MyHeritage user, Thomas Edelmann, spoke with us and requested help. His motive? To make a long-overdue apology. Today, we’ll be sharing Edelmann’s story, a moving tale that was recently featured on CNN.

Born in Germany over 25 years after the Allies defeated Hitler, Thomas Edelmann found himself on MyHeritage in search of someone he had never met and that he never knew existed. He was in search of someone connected to a story dating all the way back to 1930s Nazi Germany. Upon contacting MyHeritage, Edelmann explained that his grandfather, a man named Wilhelm Edelmann, was the owner of a hardware store that had been located near Northern Bavaria in Bad Mergentheim. As a retiree, Edelmann had found himself interested in genealogy and used MyHeritage on a regular basis to build his own family tree. Growing up, Edelmann had always heard rumors about the family business. He had suspicions that the business may have been Jewish founded before being confiscated by the Germans during WWII. Uncovering Nazi Gestapo tax records, Edelmann was able to recently confirm this fact. As it turns out, the Jewish founders had been forced to sell the business back in 1938, following the Nuremberg Laws. In these same records, Edelmann was able to find the name of the original owner, a man by the name of Benjamin Heidelberger. Upon making this discovery, Edelmann became determined to track down this man’s descendants to make a long-overdue apology, resulting in him reaching out to MyHeritage for help.

In recent years, MyHeritage has played an important role in a series of genealogy breakthroughs. When a member of our support team was on the phone with Edelmann, Edelmann mentioned his search. Captivated, that sales member then relayed the story to our company’s research team. Upon hearing the story for themselves, our researchers became determined to help Edelmann on his search for the descendants of Benjamin Heidelberger.

Setting out to find any information about Heidelberger and his family, MyHeritage’s researchers were able to unearth two very important records: Heidelberger’s gravestone located in northern Israel, as well as Heidelberger’s naturalization record from British Mandatory Palestine. Using these records, our research team set out to do what they do best: build a family tree. Gravestone image for Benjamin and his wife

After building Heidelberger’s family tree using the platform, our researchers were then able to locate his living descendants. This was no small task, as the MyHeritage research team only had the name “Benjamin Heidelberger” to work with.

Still, with 12.7 billion records available on MyHeritage, the team was hopeful. With a little hard work and ingenuity, they were able to discover that Heidelberger had a living granddaughter, a woman in her 80s named Hanna, who was living near Haifa, Northern Israel.

Reaching out to the descendant Hanna

After locating Hanna, MyHeritage reached out to her on Edelmann’s behalf. Initially suspicious, Hanna became excited when she was made aware of the reason she was being reached out to. As it turns out, Hanna had visited her grandfather’s original shop in Bad Mergentheim in the 1980s and even had a photo of herself standing outside. anna outside the shop during a 1980s visit to Germany (Hanna center) (Hanna Ehrereich credit).

She also had a photograph of her grandfather’s shop framed on her wall to remind her, she said, of her family’s heritage on a daily basis. Benjamin and his wife, Emma

After speaking to the MyHeritage team, Hanna said she was aware that her grandfather, Benjamin Heidelberger, had been forced to sell the property by the Nazis and that the money he received from the sale had been used to purchase German exit visas for Benjamin, his wife Emma, and their son (Hanna’s father).

Edelmann was anxious to speak to Hanna and asked MyHeritage to facilitate a call. Before the call, Thomas wrote the following to Hanna:

“I believe that if my family supported the injustice your grandparents experienced, it is our duty to take this into account and take over responsibility at least in getting in touch with you to listen and learn.

As I am part of the Edelmann family I want to take the first step and listen to you. I do understand that you might not see any benefit for yourself personally in talking to me. But with me understanding and being able to teach my children and possibly other family members about the impact of particular historical decisions, this might help them to make better decisions in their lives.

Currently, the political climate in our country is poisoned. There is a new antisemitism upcoming. I want to make sure that at least my family will never again be responsible for injustice experienced by others, but stand up to take part for the weak”.

After receiving this letter from Edelmann, Hanna agreed to speak with him and, soon after, the pair talked for over 90 minutes. On this telephone call, they discussed their families’ stories in German. The conversation was moving, according to Hanna, who told MyHeritage, “He was very moved and said he was so happy to hear the story from my side — he was almost crying.” Edelmann was able to make his own apology for the injustice that Hanna’s family faced in Nazi Germany, an apology that he felt he was responsible for making for so very long. This motivation to make this apology was what fueled his desire to use MyHeritage to track down Hanna and it is simultaneously what fueled our team to help in the search. Edelmann shares that he was deeply moved by the call and that the two continue to stay in touch —he even plans to travel to Israel in the future.

Uncover Your Past With MyHeritage

This story is but one of many when it comes to our users using MyHeritage to uncover their past and form a greater appreciation for history’s events.

We’re happy to have helped Edelmann make contact with someone he searched for so tirelessly, forming a friendship that they can remember forever. It is our honor to have played such a crucial role.

We hope that you will be inspired to uncover your own family history, forming an appreciation of your ancestors and the hard times that they faced. What stories will you discover on MyHeritage? What doors will you open? We’re here to help you find out!

The post MyHeritage Helps Man Track Down a Family’s Descendant to Discuss the Past appeared first on MyHeritage Blog.