Now THIS is the Browns team we’ve been waiting for 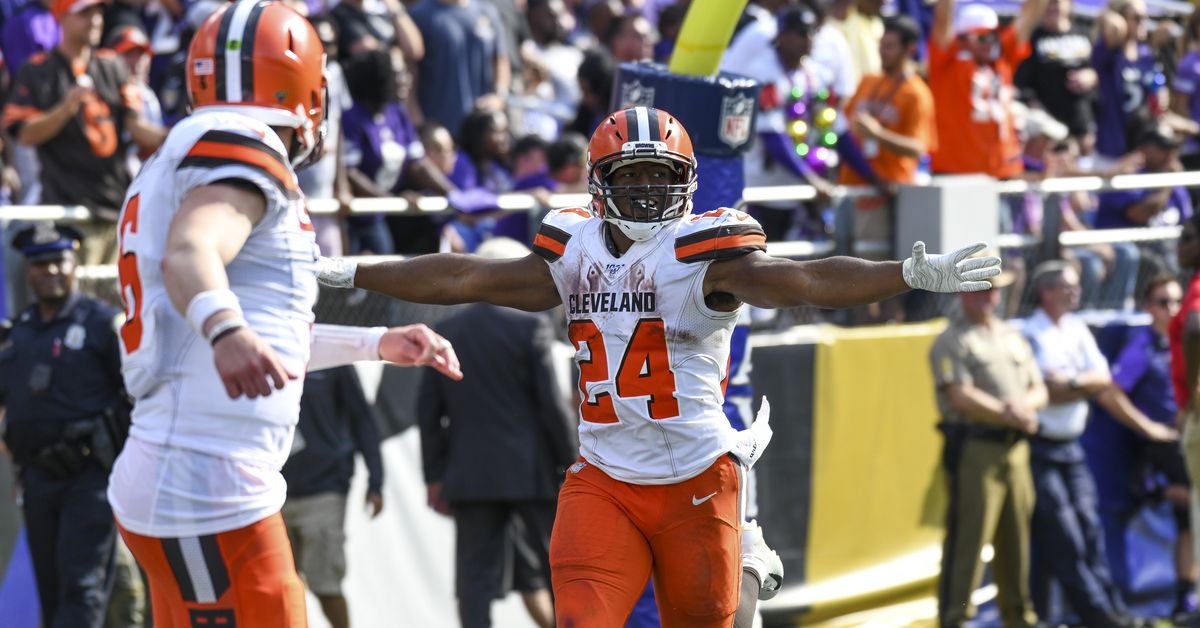 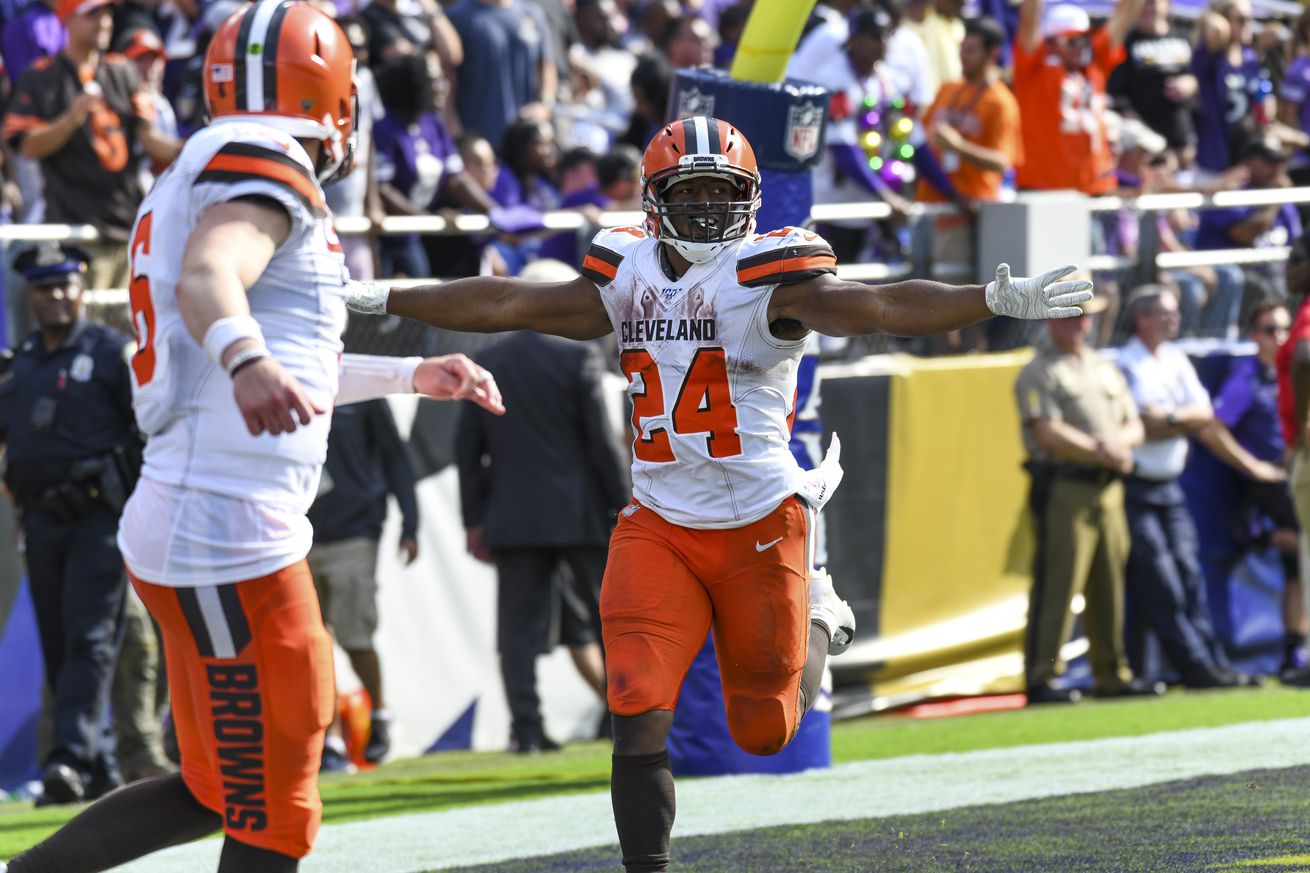 With Cleveland’s 40-25 win over Baltimore, the Browns are finally starting to live up to their hype.

The Cleveland Browns got a big win on Sunday by going into Baltimore and knocking off Lamar Jackson and the Ravens 40-25. The W moves Cleveland to 2-2 and atop the AFC North. More importantly though, this Browns team finally gave us the performance that we’ve been waiting for pretty much all offseason long.

Early in the season, we’ve seen Cleveland’s offense look out of sync, Baker Mayfield try to force throws when he didn’t need to, and a ton of costly mistakes from the Browns.

With just one win over the Jets on the season, the Browns had a big test in front of them against the defending division champs, and they passed with flying colors. After being tied with Baltimore at 10-all early in the third quarter, Cleveland scored another 30 points to put the game on ice.

The strong performance started with Baker Mayfield, who had his best game of the season against the Ravens.

He finished 20-of-30 passing for 342 yards, a touchdown, and an interception, while getting sacked just once. His receivers did a good job of extending plays in the open field, too — like when tight end Ricky Seals-Jones had a nice 59-yard catch that set up the Browns touchdown to go up 17-10.

Mayfield’s favorite target Sunday was Jarvis Landry, who caught eight passes for 167 yards, a career high for him. Landry stepping up was big for Cleveland since Odell Beckham Jr. had a quiet game. Beckham was flagged for a scuffle with Marlon Humphrey late in the game and had just two catches. Letting defenses key in on Beckham to open up the passing game for other wideouts was part of Cleveland’s game plan, too.

“I think formatting stuff and just finding the one-on-ones and taking advantage of it,” Mayfield said earlier in the week. “We are having to adjust on how teams are playing us because of him and some of our other pieces, but we are figuring it out.”

The Browns are better when OBJ has a big day, but having other guys to rely on when defenses pick on him is crucial to the offense’s success.

Mayfield looked more comfortable behind his offensive line, too — Cleveland being able to provide a strong pass protection against the Ravens certainly helped:

The @Browns are on the board in Baltimore!@BakerMayfield throws the 9-yard TD to @RickySealsJones #Browns : CBS : NFL app // Yahoo Sports appWatch free on mobile: https://t.co/lm0vvtP8ei pic.twitter.com/Cfp5QM2jCX

Mayfield getting sacked a season-low one time was a positive step for him in trusting his offensive line. Heading into Sunday, Mayfield had been sacked 11 times in three games, making his OL look worse than it actually is. Geoff Schwartz broke it down:

In Week 1, the Titans beat the Browns, 43-13. And yes, the Titans got after the Browns offensive line and their quarterback. That first game has affected how Mayfield operates in the pocket. Here are a few examples.

In the following week’s game against the Jets, the Browns were near the goal line facing a third down. The Jets only sent three pass rushers. The protection was outstanding and there was a Browns wide receiver running open on the bottom of the formation. But rather than sticking in the pocket, Mayfield ran away. He doesn’t trust the protection to give him time to make the throw.

The performance also helped Mayfield silence some critics he’s gained following a shaky start to 2019, most notably ESPN’s Rex Ryan. Earlier in the week, Ryan called Mayfield “overrated as hell,” though Mayfield said Ryan’s comments didn’t have much impact on him leading up to the game:

Then again, Mayfield is often motivated by his detractors.

Mayfield thrived because the Browns’ playcalling obliterated the Ravens’ plans

Baltimore came into Week 4 with a well-thought-out plan. The Ravens were going to shut down Odell Beckham Jr. with a long list of double-teams and test Cleveland’s embattled offensive line by sending pressure they hoped would disrupt the second-year QB.

Unfortunately for John Harbaugh, this was what the Browns were expecting. Browns head coach Freddie Kitchens rope-a-doped Baltimore early, parrying away from its blitzes with a combination of play-action passes, quick strikes on short routes, and screen passes out of the backfield. This nullified the Ravens’ push up front — they had only one QB hit on the afternoon — while taxing the secondary. While OBJ stretched the field vertically, these screens and quick outs stretched it horizontally.

Baltimore adjusted to that, leaving a soft middle loaded with single coverage and outright holes, most of which were barreled through by Landry:

Mayfield’s second-half breakout in 2018 was predicated on moving away from former OC Todd Haley’s Landry-heavy passing scheme and spreading the ball out to new targets, particularly out of the backfield. Sunday’s game held on to some of those elements — Nick Chubb and Dontrell Hilliard made up 23 percent of the Mayfield’s targets — but it also proved this team can still thrive when opponents fail to properly account for Landry.

Of course, none of this would have been possible if Mayfield weren’t able to step up in the pocket and make the right decisions downfield. He chalked the win up to better execution, and it’s tough to argue that; the Cleveland quarterback rebounded from a poor Week 3 outing to push his team to the top of the AFC North. He wasn’t the only one to rise up in Week 4, either.

Nick Chubb had the best game of his season so far, too.

During last week’s game against the Los Angeles Rams, Kitchens got heat for not running Chubb in the red zone late in a 20-13 game. The Browns made the proper adjustments this week though, and fed Chubb when the Browns were in scoring territory.

Cleveland’s run game got a huge boost from Chubb overall. On Sunday, the second-year running back had three touchdowns and 165 yards, including an 88-yard score that he turned on the jets for.

It also marked the first game this season where he rushed for more than 100 yards. Browns blog Dawgs By Nature gives credit to the coaching staff’s second-half adjustments for Sunday’s numbers:

Whatever the coaches adjusted at intermission worked because the first half was a bust with the rushing attack. A whooping 30 yards on the ground was gained in the first half with 10 gained on one play. A total of three running plays resulted in negative yardage. After halftime, the Browns ended the game with 193 yards rushing and four rushing touchdowns, but the first half was a joke.

If Cleveland’s offense can be this balanced and efficient moving forward, opposing defenses will have their hands full.

Against the Ravens, a big key to victory was capitalizing on turnovers.

In Week 1, Cleveland didn’t force any turnovers, and failed to capitalize off a fumble against the Jets in Week 2. Last week against the Rams, Cleveland got just three points off three LA turnovers. This week, the Ravens turned the ball over three times, and the Browns were able score 14 points off of them. It’s even more impressive considering the fact that Baltimore hadn’t turned the ball over all season before facing Cleveland.

But Cleveland still didn’t clean up one of its biggest issues: penalties. Ahead of Sunday, Cleveland had a whopping 35 penalties for 327 yards. The Browns still had six penalties for 41 yards on Sunday, though the majority happened in the second half as Cleveland started to pull away.

The Browns still need to get the penalties under control, because it’s a lot easier to win games when you aren’t beating yourself as a team. At least against the Ravens, those mistakes didn’t cost them.

Cleveland’s win was big for the team’s confidence, but perhaps more importantly for its playoff hopes.

The Browns being 2-2 after Week 4 as opposed to 1-3 gives them a much better shot of contending for the divisional title and making it to the postseason come January. Since the current playoff format in 1990, 36.8 percent of teams that started 2-2 have made the playoffs — for 1-3 teams, it drops to 14.4 percent.

Looking ahead, the Browns’ schedule sets up pretty favorable for them. After road games against San Francisco next week and New England on Oct. 27, and a home game against the Seahawks sandwiched in between, six of Cleveland’s last nine opponents currently don’t have a win.

There’s still a lot of season left, but with the Steelers and Bengals at the bottom of the division, the AFC North looks like it will probably come down to Cleveland and Baltimore. The Browns will play the Ravens again at home on Dec. 22 in a game that might decide the division winner. If Cleveland continues to play like this, the Browns could end up with their first divisional championship since 1989.

After a whole offseason of anticipation, the Browns are finally living up to their hype in 2019, even if it’s a bit later in the year than we expected. The real test for them moving forward will be keeping this type of performance up week in and week out.