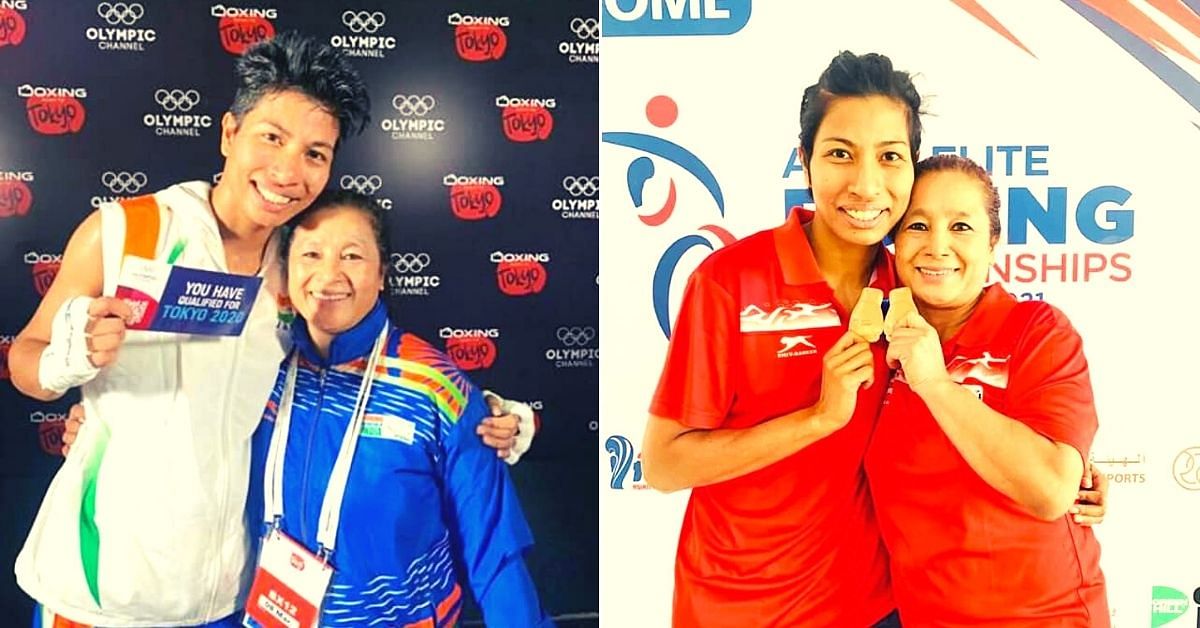 On 30 July, Lovlina Borgohain, the 23-year-old pugilist from Golaghat district in Assam, guaranteed herself a Bronze Olympic medal when she qualified for the semi-finals of the Women’s welterweight division, defeating Chen Nien-chin from Chinese Taipei in their quarterfinal bout.
(Image above of boxing coach Sandhya Gurung and her pupil Lovlina Borgohain courtesy Facebook.)

While Lovlina battles it out in Tokyo, someone in the Burtuk area of Gangtok will closely follow the outcome of her sensational run in the Olympics.

That someone is her coach Sandhya Gurung. Sandhya helped turn Lovlina from someone who would crumble under pressure fighting tough opponents into a lion in the ring.

Before her quarterfinal bout, you can see Lovlina say to herself, “Tum sherni nahi ho, tum sher ho. (You aren’t a lioness, you are a lion).”

This is something Sandhya would say into Lovlina’s ear before her past bouts.

“She was a tall, shy girl, but the height advantage got her the attention from Assam in sub-junior camp. She was a bit reluctant in sparring, but we pushed her to fight that fear. Her target was always on the Olympics, ever since she went for the sub-junior world championship in 2013. She was initially playing in the 75 kg category. Later, she came down to 69 kg eyeing for the Olympics,” Gurung told EastMojo, who first met the future Olympic medalist at a sub-junior camp in 2012. They would go on to strike a real bond in 2016 at the National Camp in Delhi. Gurung, however, has her own tale to tell. A former boxer from Sikkim, she suffered paralysis following a road accident and remained bed-ridden for three years before she even got into the sport.

Overcoming her paralysis, she began competing in the sport in 2000 onwards in the 68 kg category. Sandhya would go on to become a national-level boxer winning a bronze medal in the National Championships and finishing up her career in 2008 before getting into coaching.

After her last in-ring performance, she was offered a job by the state’s sports department and given the option of either becoming an official or a coach. The current chief minister of Sikkim, Prem Singh Golay, who was the sports minister at the time, nudged her towards becoming a coach. By 2010, she obtained her coach’s diploma and has been training fighters ever since.

When she first began coaching Lovlina, Sandhya tells ESPN, “She had everything, but she was scared. It was okay against weaker opponents. She’d still win against them. But the moment you put her in the ring with a real threat – in an actual pressure situation, she would panic.”

Things began to turn at the National Camp in 2016 after the Rio Olympics. She told Lovlina that she had to try for the next Olympics given her physical attributes and ability.

As she goes on to tell ESPN, “She [Lovlina] had this beautiful waist-length hair. And she had chopped it all off to a short crop. She said the hair got in the way when she boxed,, so that was it.”

In fact, Lovlina would shave her hair off entirely in 2018 but maintained a short-crop length thereafter. This was when Sandhya began telling Lovlina that she was a lion in the ring.

Of course, it was not the length of her hair or pep talk that would turn Lovlina into a champion boxer. Sandhya began working on her jab, which is Lovlina’s number one weapon in the ring. A weak jab allows opponents to get in and do damage. However, Sandhya helped Lovlina develop a hard and accurate jab.

Beyond technique, it was helping Lovlina not to forget the fear in the ring because, after all, it’s natural to get scared when someone punches you from a few feet away. What Sandhya taught Lovlina was to deal with her fear.

Despite being unable to get on the plane to Tokyo, she keeps in touch with her student via video call, discussing opponents, potential strategies and offering motivation.

While she divides her time between Sikkim and the National Camp in Delhi, where she coaches champion boxers like Lovlina, she wants to bring forward real talent from her own state into the boxing ring, particularly women.