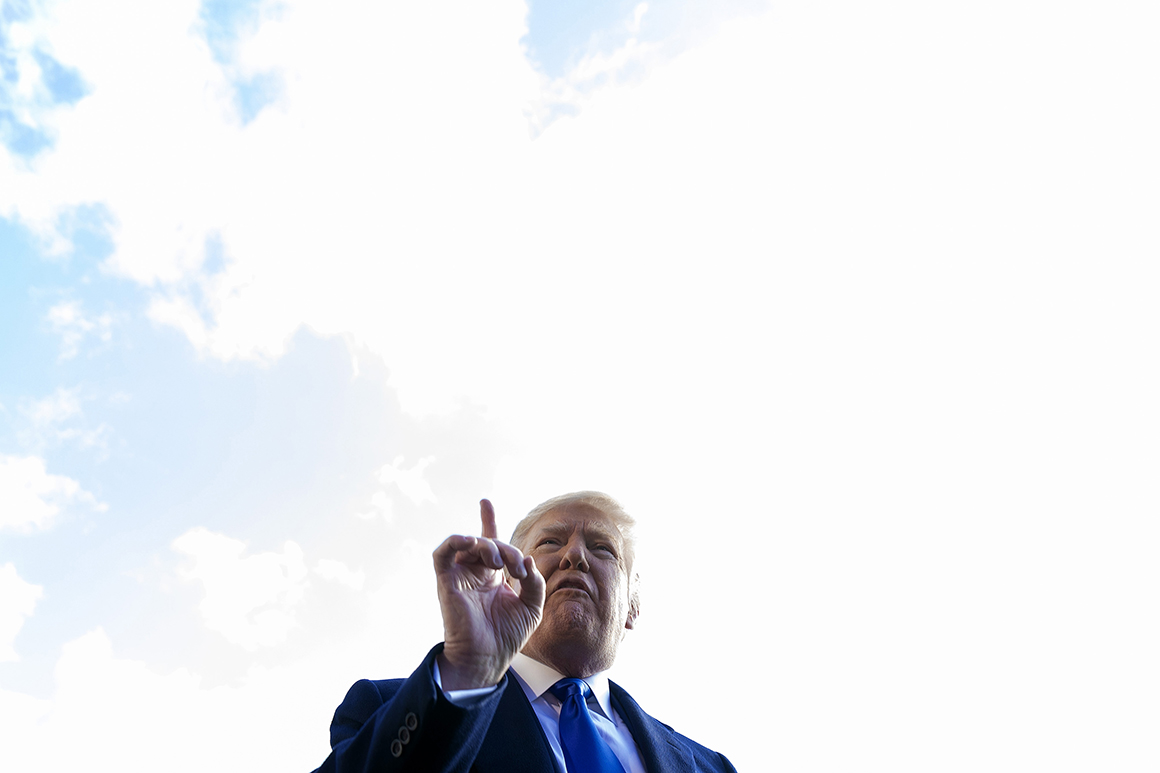 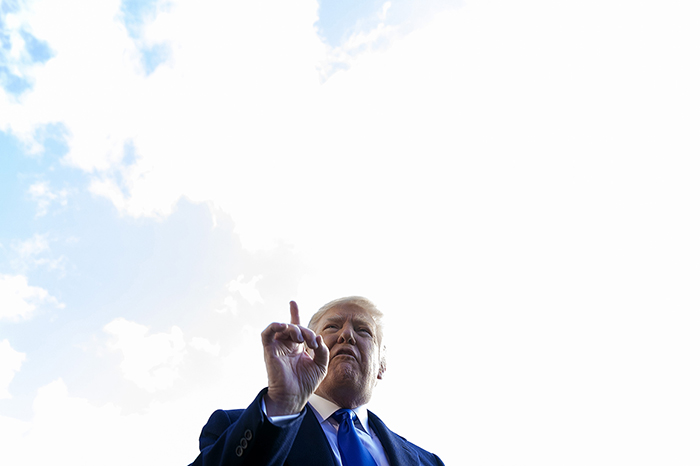 YOUR AFTERNOON READING … TRANSCRIPTS from the depositions of Fiona Hill (466 pages) and Alexander Vindman (340 pages). SEE PAGES 7 through 10 of the Hill testimony for a dustup between Rep. MATT GAETZ (R-Fla.) and House Intel Chairman ADAM SCHIFF (D-Calif.).

PRESIDENT DONALD TRUMP spoke to reporters on the South Lawn before leaving for Georgia this morning, hitting on everything from Ukraine to vaping.

— ON ANOTHER ZELENSKY CALL: “So I had a second call with [Ukrainian President Volodymyr Zelensky], which actually came before this one and now they all want that one. And if they want it, I’ll give it to them. … I had a call. I’m sure it was fine. You know, I make a lot of calls. I have no problem releasing it. I’m very transparent. Nobody is more transparent than I am.” Trump mentioned the second call at a Senate GOP fundraiser Thursday night.

— ON GORDON SONDLAND: “Let me just tell you, I hardly know the gentleman. But this is the man who said there was no quid pro quo, and he still said that. And he said that I said that. And he hasn’t changed that testimony.”

… BUT, BUT, BUT, exactly one month ago, on Oct. 8, @realDonaldTrump tweeted that Sondland, who donated $1 million to his inaugural fund, was “a really good man and great American.” The tweet

— ON SIGNING PHASE ONE OF THE TRADE DEAL: “Assuming we get it — I don’t like to talk about things until we have them. But it could be Iowa or farm country or someplace else like that. But it will be in our country.”

— ON CHINA TARIFFS: “They’d like to have a rollback. I haven’t agreed to anything. China would like to get somewhat of a rollback, not a complete rollback, because they know I won’t do it. But we’re getting along very well with China. They want to make a deal. Frankly, they want to make a deal a lot more than I do. I’m very happy right now. We’re taking in billions of dollars.”

— ON VLADIMIR PUTIN’S INVITATION TO VISIT RUSSIA NEXT YEAR: “It is right in the middle of political season, so I’ll see if I can do it. But I would love to go if I could.”

— ON MICHAEL BLOOMBERG: “He’s not going to do well, but he’s going to hurt [Joe] Biden, actually. … There’s nobody I’d rather run against than little Michael.” A photo of Rudy Giuliani, Trump, Bill Clinton and Bloomberg, via NYT’s Mike Grynbaum

ABOUT LAST NIGHT — WAPO’S JOSH DAWSEY: “[Trump] asked if Sen. Lisa Murkowski was there and she wasn’t. ‘She hates me. I kind of like her but she really doesn’t like me. We do so much for Alaska you’d think we’d get her vote for something one of these days,’ POTUS said.”

SHUTDOWN WATCH … CAITLIN EMMA: “House plans vote to stave off shutdown this month”: “The House will pass a stopgap spending measure the week of Nov. 18, hoping to thwart a government shutdown later that week, House Majority Leader Steny Hoyer said this morning. The leader did not say how long that next patch would last.” POLITICO … Hoyer’s Dear Colleague letter

IVANKA GOES TO MOROCCO … AND OFF MESSAGE! … FROM AP’S DARLENE SUPERVILLE in Rabat: “‘The whistleblower shouldn’t be a substantive part of the conversation,’ she told the AP, saying the person ‘did not have firsthand information.’ Of the individual’s identity, she added that, ‘to me, it’s not particularly relevant aside from what the motivation behind all of this was.’

“In a wide-ranging, 25-minute interview, Ivanka Trump also addressed her family’s criticism of Democrat Joe Biden and his son Hunter, whether she wants four more years in the White House and the possible future sale of her family’s landmark Washington hotel. … In the AP interview, Ivanka Trump said she had yet to decide on what role she will play in her father’s re-election campaign. On the question of whether she also wants another four more at the White House, the mother of three said the answer would largely depend on the needs of her children.” With video: AP

— THE IDENTITY OF THE WHISTLEBLOWER is, perhaps, one of the central issues for many Republicans at the moment. That the president’s daughter is scooting away from that is quite noteworthy.

FORGOT ABOUT THIS ONE … FLAGGING AHEAD OF LSU-ALABAMA … ALABAMA REP. BRADLEY BYRNE on DONALD TRUMP post-“Access Hollywood” in 2016: “Donald Trump’s comments regarding women were disgraceful and appalling. There are absolutely no circumstances under which it would ever be appropriate to speak of women in such a way. It is now clear Donald Trump is not fit to be President of the United States and cannot defeat Hillary Clinton. I believe he should step aside and allow Governor Pence to lead the Republican ticket.” PBS

— TRUMP told reporters this morning that he won’t campaign against Sessions. “We’ll see what happens. He’s got tough competition.”

— BURGESS EVERETT: “11 GOP senators support Jeff Sessions’ comeback bid for Senate”: “The letter is signed by GOP Sens. Richard Shelby of Alabama, Jim Inhofe of Oklahoma, Pat Roberts of Kansas, Mike Enzi of Wyoming, Mike Crapo of Idaho, Johnny Isakson of Georgia, John Barrasso of Wyoming, Roy Blunt of Missouri, John Boozman of Arkansas, Ron Johnson of Wisconsin and Deb Fischer of Nebraska. Roberts, Enzi and Isakson are all retiring this year or next. Barrasso and Blunt are the Nos. 3 and 4 GOP leaders, respectively, in the Senate GOP. …

“‘Jeff Sessions was unflinching ‘America First’ before it was cool. As a U.S. Senator, Jeff helped lead a conservative revolution back to ‘America First’ principles,’ Barrasso said.” POLITICO … The letter

HIS SIGNATURE ISSUE … “Trump’s immigration policy is in disarray,” by Anita Kumar: “Nearly three years into office, Trump’s attempts to match the lofty campaign promises he made on immigration are in disarray — the wall remains largely unbuilt, so-called sanctuary cities are still receiving federal money and birthright citizenship remains intact. And over at the sprawling Department of Homeland Security, a bitter dispute recently erupted over who should head the agency tasked with enacting Trump’s immigration policies, leading some frustrated aides to plot ways to circumvent federal law and push for the leader of their choice. …

“[T]he Senate is expected to confirm [Chad] Wolf to his current job — acting undersecretary of Homeland Security for Strategy, Policy and Plans — as soon as next week, allowing him to become acting secretary … The White House has been speaking to reluctant GOP senators, including Mike Lee of Utah and Chuck Grassley of Iowa, to ensure they have the necessary votes … Now, some immigration hawks are worried Trump will never nominate a permanent secretary, leaving Wolf as acting secretary. Or, worse yet, they fear Trump will eventually nominate Wolf to run the agency full time.” POLITICO

HMM … “Referee says he told Rep. Jim Jordan that Ohio State doctor performed sex act in shower,” by NBC’s Corky Siemaszko: “A professional referee says in a lawsuit filed Thursday that disgraced doctor Richard Strauss masturbated in front of him in a shower after a wrestling match at Ohio State University, and he reported the encounter directly to Rep. Jim Jordan, R-Ohio, who was then the assistant coach.

“‘Yeah, that’s Strauss,’ Jordan and then-head coach Russ Hellickson replied, according to the lawsuit, when the referee, identified in court papers as John Doe 42, told them about the incident. The lawsuit, filed in federal court in Ohio, implies that Jordan’s response to the incident, which the referee said happened in 1994, was essentially a shrug. John Doe 42 is the second person to say he told Jordan directly about either being approached or molested by Strauss. … [Jordan] has repeatedly denied knowing anything about what Strauss did.” NBC

BATTLE FOR THE SENATE — “GOP senators hit by early wave of outside money ahead of 2020,” by James Arkin: “Democrats spent years sounding the alarm on ‘dark money’ as groups pummeled their senators. Now, the left is the side delivering the early blow. … Outside groups in Arizona, Colorado, Maine and Iowa have already spent or booked over $1 million in each state — and in some cases much more, according to Advertising Analytics — on advertising criticizing the senators, more than doubling the spending from Republican-aligned groups trying to respond. …

“[T]he top spenders are a band of nonprofit organizations that formed just this year, which can raise and spend unlimited amounts of money and do not have to disclose information about their donors.” POLITICO

“Activists are hoping to harness that anxiety and use it to urge 2020 Democratic candidates to take more ambitious positions on climate issues. Then, they want young people to show up at the polls and vote for the candidate willing to be most aggressive.” WSJ

SNAPSHOT OF AMERICA — “Two versions of Texas collide over gun measures and mass shootings,” by WaPo’s Jenna Johnson in Austin: “Republicans who control the state are under pressure to implement gun-control measures that they’ve long spurned, ones conservatives in other states embraced following mass shootings. Continuing to ignore those calls could mean losing political power as rapid growth and accelerated diversity are defining a New Texas. Acceding to them, however, means angering what’s left of Old Texas, and the powerful gun supporters it has long accommodated.” WaPo

WHAT SCOTT BROWN IS UP TO — BOSTON GLOBE’S JOSHUA MILLER: “Scott Brown, the Wrentham selectman turned state representative turned state senator turned US senator turned US ambassador to New Zealand and Samoa, will have a new title at the end next year: law school dean. Brown and New England Law Boston announced Friday that Brown will become president and dean of the law school in December 2020 after completing his time as ambassador.” Boston Globe