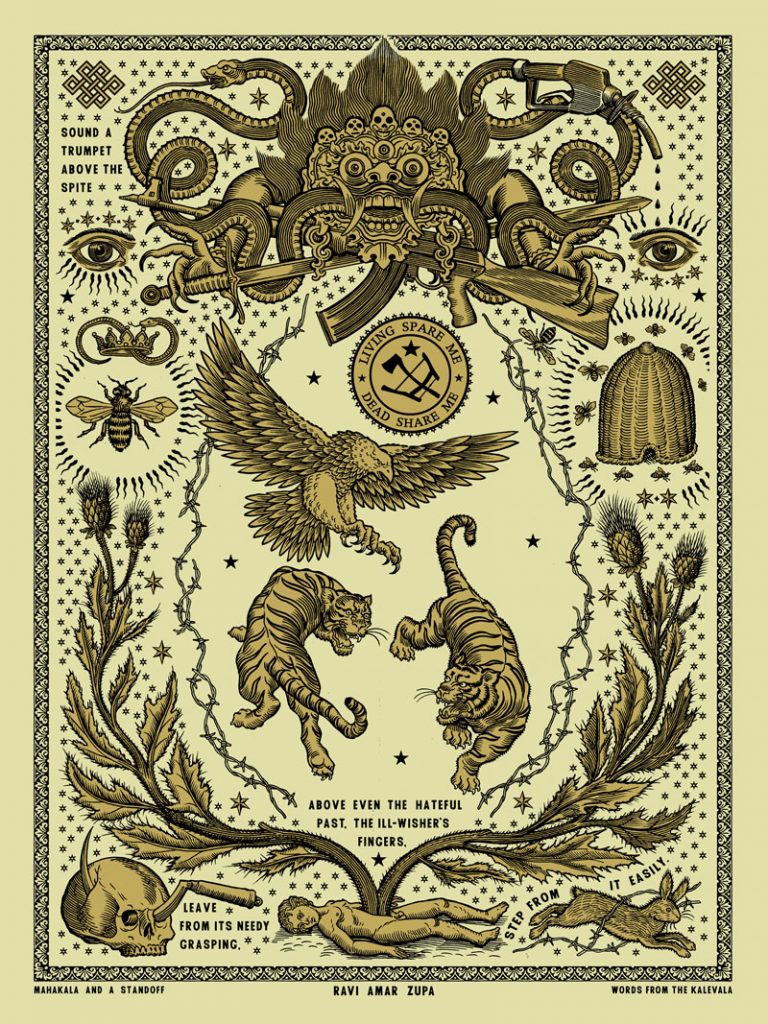 Self-taught artist Ravi Zupa, is showing his gratitude to anyone who has decorated their body with his art. He has created a specially designed poster which he will give to anyone who wears or has made a tattoo of his work.

It seems to me that most tattoos are a symbolic means by which significant people or events are marked. It’s a ritual of passage. I like this about tattoos. I like that human beings can’t help but be symbolic and artistic.

We spoke to Ravi about the process behind the intricate work he makes, what inspires his pieces and his own tattoo collection… How did you begin to teach yourself how to create art? Were there any artists that inspired or helped you along the way? When I was growing up, creating art was like eating breakfast in my house. The most ordinary everyday activity. Both of my parents and all of my siblings did one form or another. My mother is by far the most inspiring and influential artist and thinker in my life.

What inspires the pieces you create? Can you tell us about the process behind each piece? I mostly get inspired by other art. Usually I dig around in books and look at art on the internet and something hits me very hard. My motivation is to create images that will hit someone else with the same force. I usually find something in a piece of art that excites me and then I draw some rough drawings, pulling something from that piece. It might be a particular face, a piece of clothing, a scene, a pose or anything really. I then usually draw the whole thing and about as often as not I dislike it and start over. In many cases I draw the image three or four times to near completion before I get one that works.

Is there a certain subject or animal that you particularly love turning into art? Mythology and historical cultures are the most compelling subject for me. I like to find lateral connections between traditions, religions, characters, rituals, stories and so on. Art is so interesting because it grows and evolves the way that life does and it becomes more sophisticated as it develops. Each culture on earth has an entirely unique form of art but if we look at them carefully we find that there are threads that connect all of them.

What is your favourite medium to create in? I could never choose. I am most skilled at drawing with a pencil or pen but there are so many kinds of ideas and experiences that are begging to be created or depicted and they all have different needs. You can’t run a stitch with a hammer and you can’t drive a nail with a needle and thread.

Lots of people have tattoos of your artwork, do you have any tattoos? Yes. I have a Shrivasta on my arm with a dark animal type glyph that I drew and the word Ahimsa on my chest which is a form of combative non-violence. I got my first tattoos in 1999 at a San Fransisco shop called Black + Blue Tattoo. I had only lived there for a few months and had very little money so I went around to different shops and asked if they would trade art for a tattoo. Black + Blue was the only all woman owned and operated shop in the city at the time and they were the only shop that agreed to a trade. I got two tattoos from two different artists in exchange for drawings. The shop is now legendary in San Fransisco because of that remarkable history.

I don’t care much about my tattoos now. I don’t like or dislike them. They’re like moles to me.

Do you have any new projects coming up? I’m constantly working on new projects. This month I’m releasing the first poster in a new series called “Marvelous Adventures” which depicts Hindu gods and goddesses as comic book heroes. I’m also getting going on a solo show at Hashimoto Contemporary in New York city which opens in August.

If you’re an owner of a Ravi inspired tattoo or perhaps you have tattooed one on someone else, head to his website to get your hands on a copy of his limited edition poster.