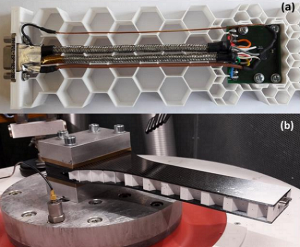 [Image: Tomsk Polytechnic University]As the world works to find faster, more cost-effective ways to get to space, it’s necessary to test out innovative, modern technologies, such as 3D printing, rather than stick to the more conventional but expensive methods. Most current 3D printed thermoplastic satellites are developed as part of academic projects that have a low budget, such as the small Tomsk-TPU-120, and it’s very important to achieve fast, flexible, and automated serial production of reliable satellites for less money.

This is the subject of a paper, titled “Material Characterization of Additively Manufactured PA12 and Design of Multifunctional Satellite Structures,” that was written by a collaborative group of researchers from the the German Aerospace Center (DLR), the Fraunhofer Institute for Manufacturing Engineering and Automation (IPA), and the University of Stuttgart Institute of Space Systems (IRS). Exploded view of the technology demonstrator with GPS receiver unit.

The abstract reads, “Increasing cost pressure on satellite builders and their suppliers push the motivation to open up for new designs and processes. This paper investigates the applicability of thermoplastic additive manufacturing for mass production of satellites. First, the potential of the cost-effective 3D-printing material Polyamide 12 for space structures is examined. Tests include mechanical and thermal-vacuum properties. In the second step, a multifunctional technology demonstrator is designed and a first qualification test is performed. This demonstrator integrates electronic and thermal management components and shows considerable volume savings. Additionally, the automatable processes used for manufacturing enable further cost reductions in series production.”

The researchers worked to demonstrate the potential of their multifunctional, inexpensive, 3D printed satellite, first by testing how usable PA 12 – an easily processed thermoplastic material – is for mass-produced aerospace applications like satellites, and then by designing and testing a multifunctional demonstrator, which is basically a “sandwich with a 3D-printed honeycomb core.”

“On the one hand, this makes so far unusable design space available,” the researchers said about their demonstrator’s structure. “On the other hand, it can be manufactured by highly automatable and flexible processes, for example by a combination of FFF printing and automated fiber placement (AFP). The demonstrator structure is used to show the possible solutions for integrating functions into the structure by 3D-printing. Furthermore, it demonstrates the potential of multifunctional structures for future satellites. To demonstrate the applied integration concepts, an additional shaker specimen is designed and tested.”

In order to test out both FDM and SLS 3D printing, the team used Stratasys’ carbon fiber-reinforced polymer Nylon 12CF and PA 2200 from EOS for their research, and performed mechanical, outgassing, and thermal vacuum tests on specimens produced in three different orientations in order to measure the Young’s Modulus and tensile strength. In regards to the thermal vacuum cycling test, the mechanical properties of the 3D printed specimens were slightly improved, though elongation at break decreased. “The SLS processed pure PA shows mechanical properties very similar to the manufacturer specifications. It also does not show significant anisotropy with respect to the printing orientation. The carbon fiber reinforced PA, on the other hand, shows a strong anisotropy,” the researchers explained. “Regarding the in plane and sideways specimens, tensile strength is drastically increased by the reinforcement. The standing specimens, on the other hand, show reduced strength. Similar behavior can be observed regarding the Young’s Modulus. Young’s Modulus of the reinforced material, however, is always above the pure PA. Furthermore, it can be noted, that the standard deviation off all tests is less than 5 %.” Test component for vibration testing; (a) theprinted honeycomb core with integrated electronics; (b) test component mounted on the shaker.

The team concluded that the PA materials do show good potential for inexpensive space applications, though an elaborate test program will be necessary for a true qualification process.

A technology demonstrator, which includes 3D printed cable ducts that integrate coaxial cables and cable bundles, was used to verify both the functionality and feasibility of the 3D printed satellites’ function-integration for electronic, propulsion, and thermal management components, and the researchers determined that, at least in this project, an integration of propulsion components was not feasible.

The researchers produced and submitted a test component, complete with a gyroscope sensor, connector, ultrasonic embedded wire, and other planned functions, to vibration testing. The component was made with a PETG honeycomb core, in order to “ensure that results on the functionality of the concept are available before the optimization of the printing process for the PEI honeycomb core.”

After the vibration test, the team detected no visible damage or change to natural frequency, and could verify the electronic system’s total functionality.

“The technology demonstrator points out the capability of multifunctional sandwich structures for satellites. The concept makes so far unusable design space accessible and can generate considerable volume savings. A First successful vibration test confirms the design,” the team concluded. “A weight reduction, on the other hand, is unlikely since printed honeycomb is not lighter than standard aluminum honeycombs. However, the multifunctional structure offers further cost saving by an automated production suitable for mass production and reduced assembling costs.”

The researchers determined that several additional steps, such as a comprehensive cost analysis, are required in order to present a “holistic evaluation of the presented concept”

Discuss this research and other 3D printing topics at 3DPrintBoard.com or share your thoughts below.