Rigoberto Urán is a businessman with a racing plan 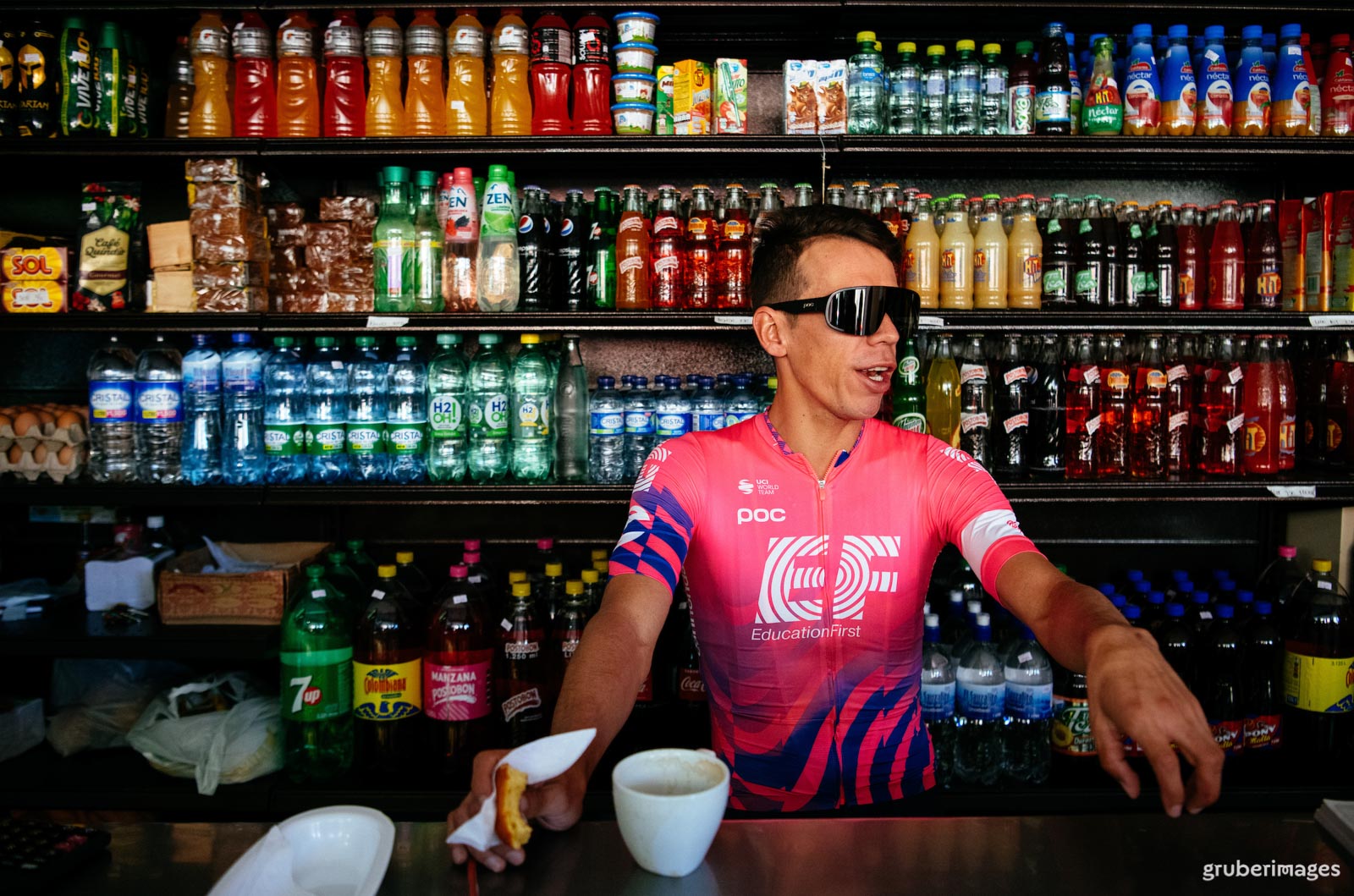 It is a truth universally acknowledged that pro bike racers asked to discuss what’s ahead are always just taking things “day-by-day.”

From Julian Alaphilippe to John Degenkolb, from Peter Sagan to Primoz Roglic, the mantra rings out in interview after interview, because what do riders really have to gain from putting their cards on the table for all to see?

Known far and wide for his muy tranquilo approach to life, Rigoberto Urán is a particularly distinguished member of the day-by-day club. With a well-documented commitment to calm, Urán is a standard bearer for the movement. As CyclingTips reported back in 2018, “No stress!” was his constant refrain at the team dinner table during the Tour the year after his runner-up ride.

But beneath the tranquilo exterior, Urán may have more up his sleeve than he is letting on. You don’t find your way onto a Grand Tour podium three different times without at least thinking at least a little bit past the day-by-day.

RIgoberto Uran on stage 6 of the Vuelta a España. Photo: ©kramon

This year, Urán is staring down challenges that will test him in new ways. At 33, and now three years removed from his runner-up ride at the Tour de France, he still has his sights set on GC contention in the sport’s biggest race—despite spending months off the bike this offseason.

It’s a tall order for sure, perhaps even taller when you consider some massive projects that are keeping Urán busy in his spare time. We’ll get to that. In any case, don’t expect him to back down. Rigoberto Urán is a man with a plan. Lots of plans, actually.

Urán got his 2020 campaign underway at the Tour Colombia this week, and the race start marked a major step in a lengthy recovery process. A few short months ago, it wasn’t entirely clear what Urán’s racing future would look like. On stage 6 of last year’s Vuelta a España, he went down in a crash and sustained a laundry list of injuries that included fractures to his shoulder blade, ribs, and collarbone and a punctured lung.

He spent nearly three weeks in the hospital, and said the doctor told him he was lucky to be alive.

“It was a very serious blow,” Urán said, speaking to CyclingTips at EF’s offseason training camp. “It was a lot of time spent in operations. It was really difficult.”

Nevertheless, Urán’s time spent on a hospital bed brought perspective, and while he emphasizes that he did not walk out of there some kind of dramatically reformed man, he is still able to paint a positive picture of at least one aspect of the experience.

“We never value what we have,” Urán said. “When you’re in a 24-hour clinic, you start to value things differently. The truth is, not much changed, I just learned how to value things more.”

Indeed, during that tough period and then a lengthy stretch at home but still off the bike only cultivated Urán’s drive to get back on the road with more determination.

“Like when you have a rest day and it gives you that desire to get back to racing, when you spend two or three months away from the bike, you come back with a lot of motivation,” he said.

Armed with that motivation and a refreshed perspective, Urán dove back into training once he was cleared to get back on the bike. Returning to competition at the Tour Colombia was the first goal. After putting in quite a bit of work over the offseason, he rolled off the start ramp in Tunja on Monday for the opening team time trial as planned.

Rigoberto Urán throws a jersey to the crowd at the Tour Colombia. Photo: Gruber Images

Urán may have finished a few minutes behind the EF quartet that hit the line together—but the team took the win.

The road ahead remains challenging, but straightforward just the same.

“The plan is to start in Colombia, go to Europe, build for the Tour which is the primary goal, and then the Olympics.”

The fact that Urán did indeed get back to racing shape in time for the Tour Colombia is a great sign that his plan is going smoothly so far. With races later in the year as Urán’s main focus, though, the burning question is whether he can actually get back to the level he had in 2017, when he finished second behind Chris Froome in the Tour de France.

Asked about his own expectations, he steers back toward “day-by-day” territory (without actually saying those words), but he also explains why he has confidence in his plans.

For starters, he really did look strong at last year’s Tour. After a tricky day in the crosswinds left his team making up ground in the early goings, he ultimately finished seventh overall and closing out with some solid rides in the mountains.

“Last year, going into the race, I was on a great level,” Urán said. “We made some mistakes, we lost time in the wind, there was the stage that was canceled in the last few days when I was feeling really strong. Despite a crash at Paris-Nice, I got back to be at a level where I was with the top contenders.”

Rigoberto Uran on the Tourmalet at the 2019 Tour de France. Photo: ©kramon

Those who watched the race may recall seeing an especially frustrated Urán initially refusing to stop when stage 19 was cut short in the face of extreme weather. He feels now, as he did then, that his form was enough to propel him at least a bit higher in the overall standings had things played out normally.

That’s a starting place for his confidence as he faces the objectives ahead. From there, he will be hard at work trying to build his form in time for the race. He knows that won’t be easy, but a little perspective goes a long way towards making his plans come to fruition. After all, “putting in the work” means he gets to spend hours and hours out on the road.

“It’s a gamble I’m making to return to that level. What keeps me calm about it is that I enjoy everything I’m doing,” he said. “I like being on my bike, being with the team.”

At the end of the day, there’s no telling in February how things will play out come June and July, but Urán does has bona fide reasons for optimism as he looks beyond simply the day ahead towards his big objectives of the year. Then again, he has big objectives even beyond that on his mind as well.

Even for those who know how to reman cool, calm, and collected in the face of challenges, there are no guarantees in cycling. Maybe Urán will get back onto the Tour podium, maybe he won’t. Fear not: He has a contingency plan in place.

Urán, who has over a million followers on Twitter and Instagram, is a bona fide celebrity in Colombia. EF teammate Alex Howes puts it succinctly: “You know how Tom Brady is in the States? That’s basically Rigo there.”

In 2014, Urán decided to put his fame – and ample marketing instincts – to work in the form of a new brand selling apparel and more. It’s not hard to understand why.

“I saw athletes who made lots of money in their careers, but then when they finished with sports, they had problems because they didn’t know how to do anything,” Urán said.

“Cycling is growing a lot in Colombia at the moment, with pro cyclists, but also amateur cyclists, who drive the money and the industry. We pros don’t spend the money. The fans are the ones that buy things. So I saw an opportunity and started up a brand in 2014, Go Rigo Go. And it was something to keep me entertained after I leave pro cycling.”

As of 2020, Go Rigo Go has grown to be just a bit bigger than your average side hustle.

Urán says his company now has a whopping 80 employees. Selling clothing from head to toe, Cannondale bikes, accessories, and more, Go Rigo Go has a web store and several brick-and-mortar locations in Colombia. Urán says there are plans for possibly expanding to Mexico and even Miami.

All told, it’s quite an operation, particularly for someone without much of a background in marketing who also happens to be a full-time pro cyclist of Tour podium caliber.

“I have a really good team, I have my wife Michelle who helps run things. If I didn’t have someone to help, it would be impossible,” Urán said. “I don’t have much free time, I’m always training, sometimes on vacation. You have to have someone who supports you, who believes in you, and who has the same dream.”

In addition to the retail side of his enterprise, Urán also puts on a massive gran fondo, the Giro de Rigo. Thousands participate. He says the chance to experience riding with the pros sets it apart from the countless other gran fondos out there, which makes sense when you consider the guest stars that he has been able to draw so far. Chris Froome was among those out on the road last year, along with plenty of big Colombian names.

When Urán is not managing either of those operations, you might also find him sharing his advice on teamwork to businesses seeking to glean his perspective—he also happens to be a motivational speaker. It’s something he is particularly excited to continue doing more of in the future.

For Urán, the smorgasbord of side hustles is more than just an investment in his own future. He says it gives him a “different way of connecting with people,” and that’s a big deal for the veteran racer.

After more than a decade in the pro peloton, it is not so much his palmares that brings Urán the most pride. As he puts it: “Podiums in the Grand Tours are important but the really important thing for me is the love from the fans.” Across all the things that keep him busy, he is working hard to find ways to connect with people. Whatever the future holds, in his racing life and beyond, you can expect Urán to continue working towards that plan above all.

“If I earn fans, it’s not just for the results,” he said. “I enjoy the racing. I’m realistic. I have admiration for my rivals. I don’t make excuses. When I’m beaten, I give credit to the better rider. I’ve won over a lot of people, in Colombia and South America, because I’m original.”

The post Rigoberto Urán is a businessman with a racing plan appeared first on CyclingTips.