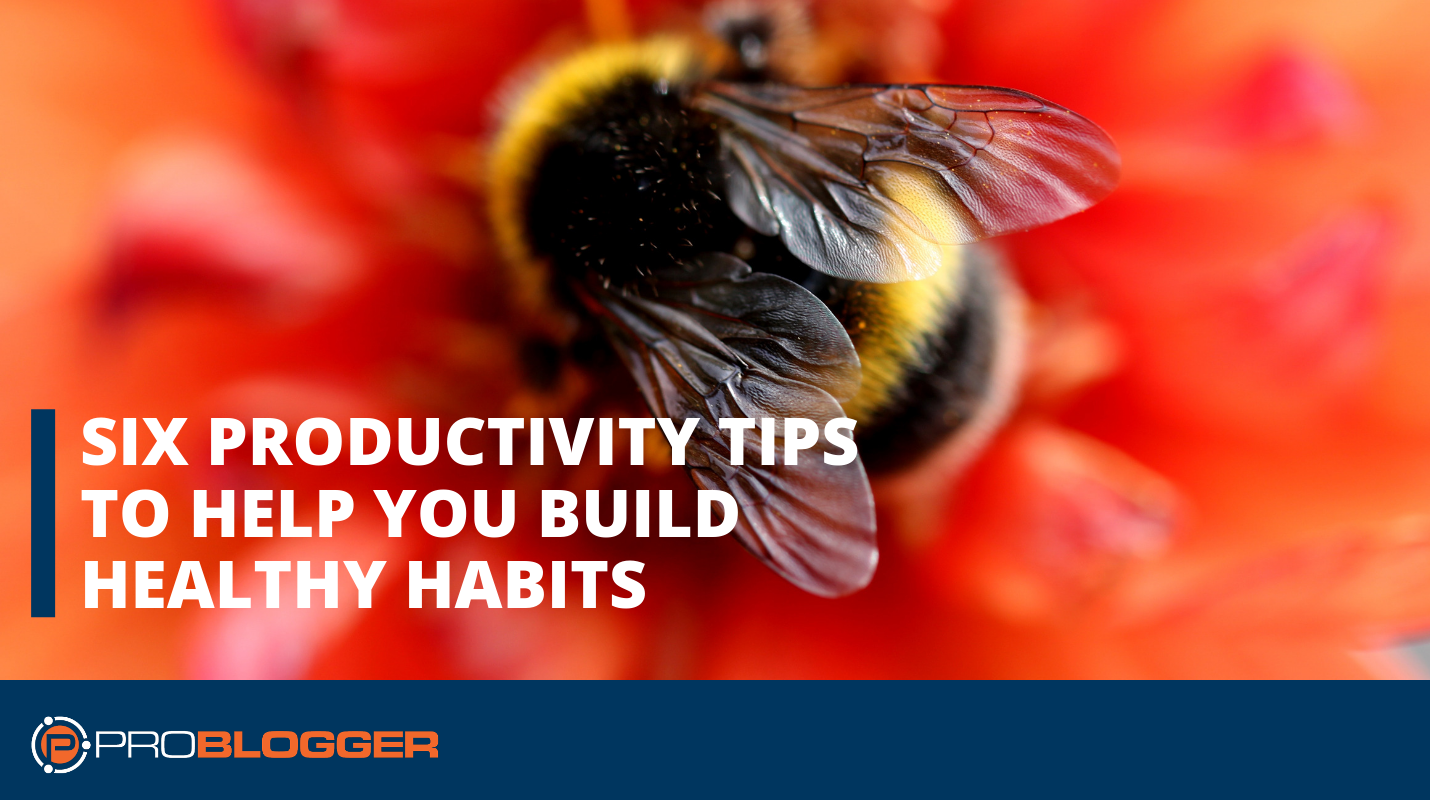 Do you struggle with managing your time?

As an online entrepreneur it’s easy to slip into bad habits
– moving frantically from one urgent thing to another, or
responding to other people’s agendas without much thought about
what we need to get done.

In this post, I’m sharing six things that have helped me form
good habits in my blogging, my business, and many aspects of my
life.

What if you’re not naturally organised?

I’m not a naturally organized person.

I’m quite impulsive and don’t like to be pigeon-holed. The
rest of my team are the opposite: they love spreadsheets, things
being organised, and so on.

But despite not being naturally organised, over the years I’ve
managed to build certain systems, habits, and routines to help me
get things done.

Because without these these types of routines I knew my business
would always be limited.

Six productivity tips that will help, no matter how disorganised
you are #1: Start with your goals and your “why”

There’s no point building good habits unless you have a clear
“why” – your motivation to making those habits stick.

A good example is my health journey over the past few years. At
various points I’ve tried to build better habits around diet,
exercise, sleep, and so on. But I never kept them going for long. I
understood what I was doing on a “head” level, but didn’t
really have a “heart” connection to them.

But for several years now I’ve been walking 10,000 steps
almost every day. I’ve also been eating healthier, and
consistently going to the gym.

What changed? At the beginning of 2015 I realised I was in a
slump. I wasn’t as healthy as I wanted to be physically,
emotionally, socially or spiritually.

Some of my early goals were about losing weight and increasing
my movement. So as well as having the “why”, I took specific
steps toward my goals.

I don’t remember where I got this mantra from. But I’ve
found it really helpful when I’m trying to build a new habit.

Building good habits often meets with resistance for me when
I’m tempted to eat something unhealthy or skip my walk. But one
thing I do when I come up against that resistance is to say
“It’s just what I do”.

“Eating healthy. It’s just what I do.”

In the early days of a goal that doesn’t come easily. Your
mantra might not sound convincing at all. But the longer u stick
with your habit, the more the mantra becomes true. The first day I
walked 10,000 steps I’d only done it once. A week later I’d
done it seven days in a row, and my mantra of “It’s just what I
do” had far more truth to it.

When I started walking every day I put it in my diary. I set an
alarm for each weekday at 12.30pm that said “Walk”.

Making an appointment with myself helped make walking a normal
part of my day.

I started arranging my workday around the walk because it was in
my diary. And then after a while I no longer needed the alarm
because my body started anticipating the walk. And if I
didn’t go for a walk, I’d start feeling a bit edgy.

#4: Start with small things and level up

Most of my good habits started off small.

For instance, when I started making health changes I began by
eating healthily. Then I added in walking, and later working at a
standing desk.

With the standing desk, I decided that to begin with I’d just
spend the first hour of each work day standing, then I’d sit
down.

If your goal is to write a daily blog post, going from no posts
at all to writing a post every day might be too much. Perhaps you
could do one post a week, then two, then three, and so on. The same
goes for other goals, such as running a podcast or even using
social media.

Earlier I mentioned my mantra of “it’s just what I do”.
Another mantra I have is “Never miss two in a row”.

That means that if something gets in the way of one of my habits
(or I just need a break) I give myself permission to have time away
from my routine. But I try not to miss two in a row.

For instance, if I miss walking one day I try hard not to miss
the second day. With going to the gym, which I normally do twice a
week, I’ll just do it once if I’m away.

With my blog, I might write half a post while travelling when
I’d normally write a full one.

The key here is to find ways to keep my habits going, even if
not at the frequency I’d normally aim for.

The times when I run into trouble is when I have an extended
break away from things.

Make sure you schedule time to do things for fun. For me that
might be reading a novel, watching something on Netflix, going to a
movie or a cafe, or just having a nap.

I do some of this at the end of the day. But I also set aside
Monday afternoons for it.

I think most of us need time in our weekly schedule for rest,
play, dreaming and imagining. It gives us a chance to get more
energy and new ideas. So if you want to be productive, you need to
build these things in as well.

So if you’re looking to build healthy habit, in your blogging
or your life, I suggest you:

Has something on this list worked well for you? Do you have
another tip to add? Share your thoughts with us in the
comments.