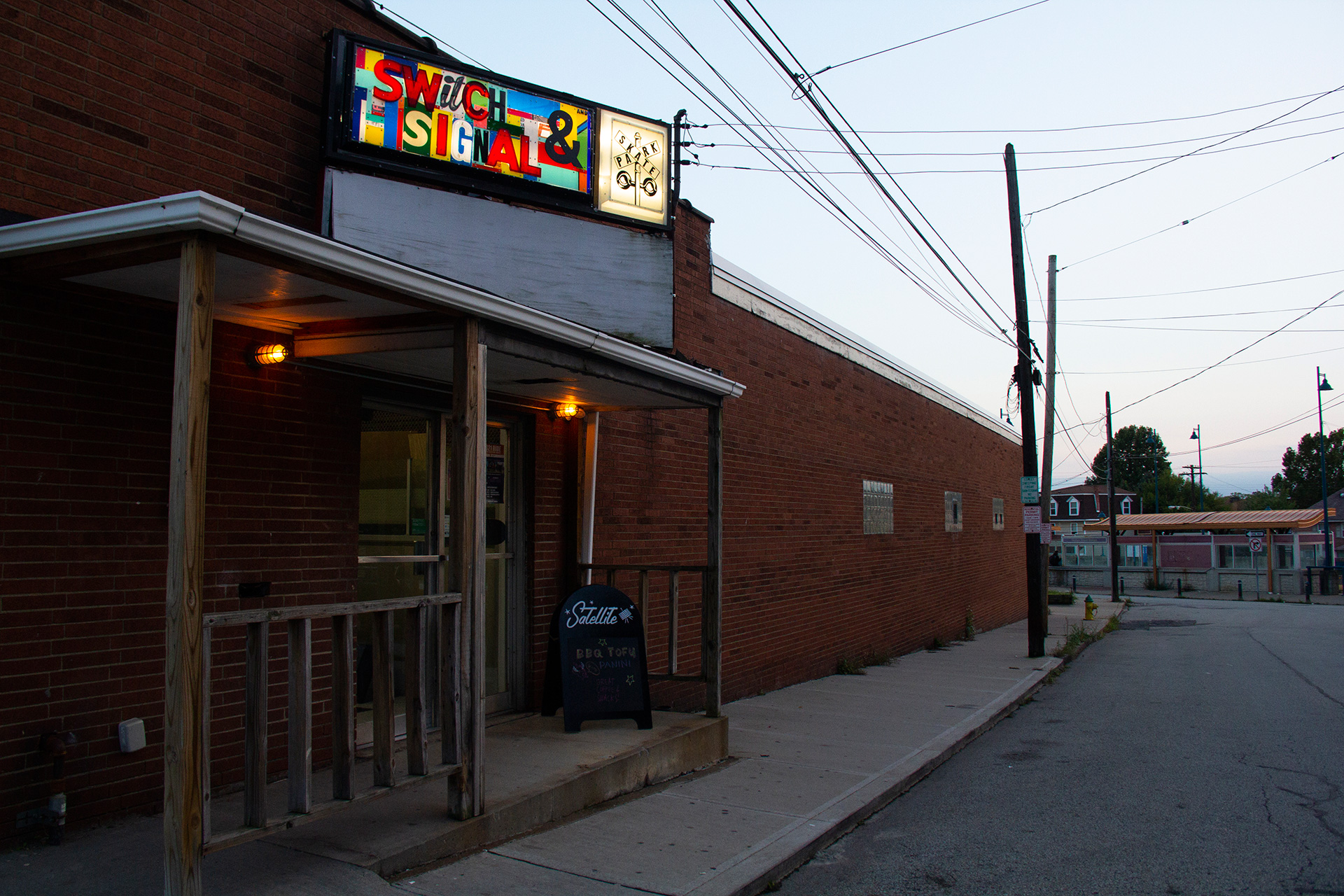 Inside Switch and Signal Skatepark, far from the trendy crowd in up-and-already-came Lawrenceville, is Constellation’s new sister cafe, aptly named Satellite. Opened this past July, Satellite almost didn’t happen. Switch and Signal’s owner, Kerry Weber, was a long-time regular at Pittsburgh cafe, Constellation, but when he first approached owner Amy Weiland about setting up and running the cafe he wanted in his Swissvale skatepark, she said no. Weiland was coming off a serious biking accident and also wasn’t interested in doing the same thing twice. But when she finally said yes, she did anything but repeat Constellation: though both cafes are owned and run by Weiland and use coffee from Ceremony Coffee Roasters, they have a very different feel.

Satellite’s design, like the skatepark it inhabits, incorporates many recycled elements from the bowling alley that originally occupied the building. The bartop used to be a bowling lane, the crown moulding a gutter. The tables and benches in the cafe’s seating area are built from the pinboy benches that were behind the pin decks, back before the pin-resetting process became automated. Those pinboys’ nicknames—Red, Box, Bone—are graffitied on the back wall of the skatepark. Weber and his designer, Michael Whartnaby, worked with Construction Junction—a construction reuse nonprofit and longstanding fixture in Pittsburgh—to reuse as many building materials as possible in the cafe and for Switch and Signal’s ramps. Not all repurposed design elements came from the bowling alley, though: Satellite’s walls have a unique tile border running around the top made from recycled skateboard tiles from Art of Board, a Hanover, PA company. Weiland said she sees Satellite as “Constellation’s punk rock little sister.” Where Constellation’s design is elegantly understated, Satellite’s is more playful, a bit more rough-and-ready. Where Constellation’s menu is a little more “precious,” as Weiland admits, Satellite’s is simpler and more focused on service. This pared-down menu is designed to satisfy coffee enthusiasts while allowing baristas to be able to really engage with the community they’re in. Swissvale is a lower-income, less homogenous part of Pittsburgh. Locating Switch and Signal there was intentional on Weber’s part, who wanted to open his skatepark somewhere where it could really be a positive influence in the community, especially for  youth. He also wanted the cafe to be entirely plant-based, a challenge that intrigued Weiland and played a role in her eventual decision to accept Weber’s proposal.

Other than espresso shots, cappuccinos, and lattes—made on a two-group La Marzocco Linea—Satellite also serves a seasonal beverage, like the coconut iced mocha with coconut whipped cream on the menu this summer. The default milk option is Sunrich Naturals soy milk, but they also serve Califia Farms almond milk, Oatly oat milk, or, on occasion, lesser-known alternatives like Ripple pea milk. Getting to experiment is part of the fun for Weiland. Cappuccinos and espressos are served in beautiful red notNeutral VERO glassware. For filter, Satellite only offers batch brew coffee, made on a FETCO using a BUNN grinder. Not offering pour-over “opens up a focus on service,” said Weiland, in keeping with Satellite’s and Switch and Signal’s goal of engaging with the community. That’s also why Satellite only offers Rishi bagged tea and not the loose leaf Song Tea on Constellation’s menu. Satellite has the addition of a food menu, and it’s all-plant-based, too. Baked goods come from Gluuteny, a local gluten- and dairy-free bakery. Onion Maiden, a Pittsburgh vegan pop-up restaurant that’s finally found its brick-and-mortar home in Allentown, provides the bagels and cashew cream cheese, muffins, and paninis on Satellite’s menu. In keeping with the environmental motivation behind the plant-based menu and the recycled building materials, Satellite is focused on sustainability, and everything except the straws at the cafe is compostable. Satellite isn’t a soothing-office-away-from-home kind of space. It wasn’t designed to be. It was meant to be the kind of space where the countercultural creativity that can be found in both the specialty coffee and the skateboarding worlds could flourish. It’s a place to try new things, to meet new people, to take off the headphones, to engage. Union Switch and Signal, the railway signaling equipment manufacturer from which the skatepark takes its name, used to be the largest employer in Swissvale. Switch and Signal Skatepark and Satellite hope to play an important and positive role in this community, too, one coffee-drinking, vegan-bagel-eating, skateboarder at a time.